Iran plans to export arms with sanctions off | News and current affairs from Germany and around the world | DW | 22.10.2020

Iran plans to export arms with sanctions off

Cash-strapped Iran wants to become an arms exporter to generate much-needed income. But so far, no prospective buyers are in sight. 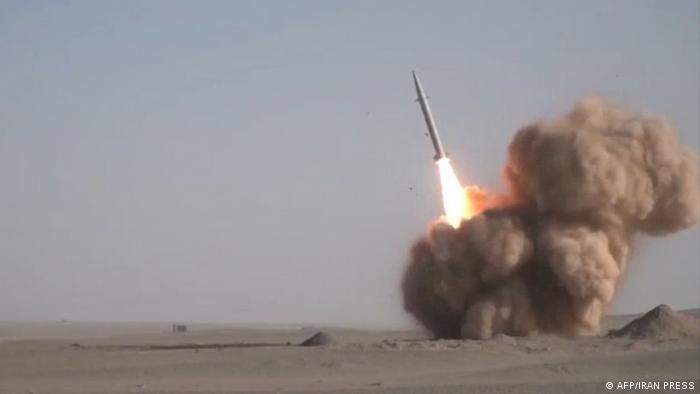 On October 18, a 13-year UN arms embargo against Iran expired. Iranian news outlets had eagerly awaited the moment for weeks. The lifting of the embargo had been agreed in the 2015 Joint Comprehensive Plan of Action (JCPOA) — more commonly known as the Iran nuclear deal.

Iranian President Hassan Rouhani heralded the step as a "diplomatic victory over the US." After all, US President Donald Trump unilaterally withdrew from the nuclear deal in May 2018, yet insisted the arms embargo against Iran should remain in place indefinitely. But the vast majority of the UN Security Council members states, with the exception of the US and Dominican Republic, voted against upholding the embargo.

"Thanks to the nuclear deal, signed by my government, we are as of Sunday permitted to buy and sell weapons with whomever we want," President Rouhani declared last week. The arms embargo was imposed in 2007, to thwart Iran's nuclear ambitions.

The terms of the 2015 nuclear deal oblige Iran to dismantle and accept checks on its nuclear program. In return, international sanctions — such as the 2007 arms embargo — will be gradually lifted.

While foreign observes now wonder whether Iran might go on a weapons shopping spree, Iranian media outlets have been speculating about potential arms exports.

Iranian security expert Hossein Dalirian, who sympathizes with Iran's Revolutionary Guard, thinks Armenia could be a potential buyer. In a recent article for the Iranian daily newspaper Jam-e Jam, he says that Armenia – currently fighting Azerbaijan over the disputed Nagorno-Karabakh region — might be interested in acquiring Iranian air defense systems. According to Dalirian, "Iran is the only country in the Islamic world that builds modern missile defense systems, guided rockets and drones."

Public Radio of Armenia echoed Hossein Dalirian's thinking on its website. The broadcaster writes: "Armenia and the Republic of Artsakh [the self-declared Nagorno-Karabakh Republic] can now legally buy Iran's Khordad-3 air defense system for protection against Israeli-made and Turkish-made drones used by Azerbaijan."

In June 2019, an Iranian-made Khordad-3 surface-to-air missile brought down a modern US RQ-4A Global Hawk surveillance drone. In response to US threats against countries seeking to trade arms with Iran, Iranian Foreign Minister Mohammad Javad Zarif recently took a defiant stance. He said that "Iran can meet its strategic needs through the countries it interacts with, like Russia and China, even though it is self-sufficient in many cases, and is an exporter itself."

Iran is said to possess the largest missile arsenal in the Middle East. "Iran has a vast arsenal, ranging from artillery units to short-range missiles and medium-range cruise missiles. In addition, Iran has a large arsenal of drones which it can effectively deploy," Mauro Mantovani of the Military Academy at ETH Zurich told DW. Iran has, for instance, been mass producing short-range missiles, like the Qiam-1, since 2011. It is capable of delivering a 750-kilogram (1,600 pound) payload and strike targets some 700 kilometers (435 miles) away.

The Islamic Republic of Iran has continued to unveil new missile systems even when the international community was still considering extending the arms embargo against the country this August. At the time, Iranian Defense Minister Amir Hatami presented an all new surface-to-surface missile and a cruise missile with a range of more than 1,000 kilometers on Iranian television. "Many countries want to buy our weapons," Hatami asserted in a television interview just after the arms embargo was lifted: "We will definitely export more than we will import; our weapons are affordable and efficient."

There is certainly no consensus on that. "There are not many countries that will want to import Iranian weapons," as German Middle East expert Udo Steinbach told DW. "Venezuela may be interested. Despite US sanctions, the country is still importing Iranian oil and has expressed interested in Iranian missiles." Steinbach says Iran is very proud of its arms industry but doubts the country will become a major exporter. "Aside from a few fringe countries, few nations will be seriously interested in equipping their armed forces with Iranian weapons."