Interview: why US tax money is ending up in Taliban pockets

Hans-Georg Ehrhart of the Centre for European Security Studies tells Deutsche Welle why Washington has put up with the fact that US taxpayers' money is ending up in Taliban pockets. 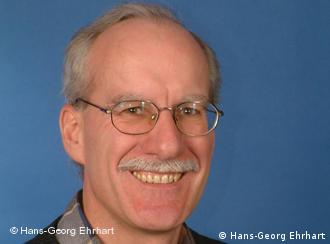 Dr. Hans-Georg Ehrhart is head of the Centre for European Security Studies (ZEUS) in Hamburg

US and allied forces have to deliver fresh supplies to around 100,000 US soldiers in Afghanistan daily. The country’s security situation poses a real challenge in the process. Afghan security companies are usually paid by Afghan police to keep the roads safe and according to US media, some of these companies are known to be working with the Taliban. Hans-Georg Ehrhart, head of the Centre for European Security Studies (ZEUS) in Hamburg, told Deutsche Welle in an interview why Washington has put up with the fact that US taxpayers' money is ending up in Taliban pockets.

Deutsche Welle: Mr. Ehrhart, according to media reports, the Taliban are financed in part through US tax money. What does that tell us about the American operation in Afghanistan?

Dr. Hans-Georg Ehrhart: Well, it gives us an idea how the situation is in Afghanistan. It is extremely complicated and complex. It also tells us just how little control Washington has over these things, though the US government has known about it for quite a while now.

Could it be that some of the confusion is due to the fact that the war in Afghanistan is a so-called privatized war – that it is being organized by a number of privately owned companies whose main interests lie in maximizing their profits?

It is important to get contracts; but it is a matter of how reliable the company is that gets a contract because sooner or later, American businesses will have to cooperate with Afghan security companies. That is where things get difficult. The Afghan companies use their connections to ensure the safety of the roads. In order to do that, they have to work with the Afghan police. The police, in turn, also have to hire other companies who can guarantee the safety of the roads. The only problem is that they don't check whether or not these companies are run by private security companies or by the Taliban.

But if this problem has been known for years, why doesn’t the US government do anything about it?

They are trying to fix it; they are trying to come up with a solution. The problem is you never know who you are dealing with in Afghanistan. Even companies that have had a long standing with US security forces can turn out to have been infiltrated by insurgents. In the end, there is no other choice than to pay money for the protection of the roads. And it is extremely difficult to control the flow of money.

In other words, foreign forces in Afghanistan just have to put up with the fact that their money may end up in Taliban hands if they wish to ensure the safe delivery of supplies? Is there no alternative?

Well, the problem can be minimized at best. But there is no way of eradicating it. We know about the corruption that goes on in the Afghan government, especially in Kabul.

How about delivering supplies through Russia and Central Asia instead of through Pakistan?

US forces have already started doing that. Due to the instability in the country's south, an alternative route has already been set up in the north. But that has caused more fighting and instability in there, where German armed forces are stationed. Forces in the north are trying to find better partners, but the problem remains the same. This kind of situation where you have to work with Afghan forces and pay for your security is always going to be problematic. In other words, we cannot guarantee that money will not land in Taliban hands by simply creating alternative supply routes in Afghanistan.