Interfaith marriages still a rarity in the Muslim world | Middle East | News and analysis of events in the Arab world | DW | 11.09.2019 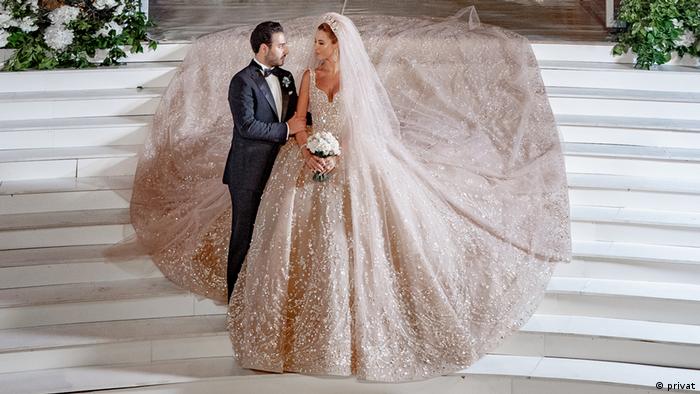 Wedding bells mixed in with traditional Arabic vocal music, a bride striding across a catwalk to meet her husband-to-be — Lebanese Instagram model Serena Mamlouk and her groom, Anthony Aour, staged their wedding like a fashion show. Their slick five-minute online video, shot from various angles, features elaborate lighting, female dancers, and a crowd on either side of the catwalk.

The stylishly produced wedding video makes a political as well as cultural statement, because Mamlouk is Muslim and Aour is Christian. Interfaith marriages like theirs are still a rarity in Lebanon and the rest of the Muslim world today. Which is why the couple first had a civil marriage in Cyprus, as they would have been unable to tie the knot in Lebanon, where marriages fall under religious law.

Their spectacular wedding video was celebrated by many on social media. One YouTube viewer wrote that it blurs the lines between religions, which is to be welcomed as we are all just humans. Another wished the couple a great future, and a third god's blessing.

"We have learned to love one another and respect each other as individuals, regardless of our nationality, our religion and our environment," Mamlouk told DW. She admits, however, that the marriage posed a challenge for some of her friends and family. Mamlouk says she and her partner realize that their marriage clashes with Lebanese reality today, but "we trusted each other from the very beginning and our love prevailed."

Mamlouk underlined that the perceived differences between them were not so big after all, as they are united in "humanist values and mutual respect."

But Loura Sfeer, who is the president of the Lebanese Commission to Combat Violence Against Women, says that in much of the Muslim world, including Lebanon, interfaith marriages are still frowned upon or outright taboo.

Tradition counts for much

Mouez Khalfaoui, a professor of Islamic law at Tübingen University in Germany, says the issue with inter-religious marriages dates back to the premodern age of Islam. According to Islamic rules, Khalfaoui explains, Muslim men are permitted to marry women of other monotheist religions, whereas Muslim women may only marry Muslim men.

He says there are two reasons for this. One is that adherents of the Muslim faith regarded their religion as superior to all other monotheist religions, and women were deemed inferior to men, which lead to a hierarchical order.

The other reason, says professor Khalfaoui, is that women were considered symbols of fertility and growth in premodern Islam. "If women married into another confession, their children were born into a different religion and social context," says Khalfaoui. In premodern times, these children were then considered forsaken. "This is why one reason why Muslim women are not allowed to marry non-Muslim men," says Khalfaoui. Because Muslim women are usually not allowed to marry their non-Muslim partners, those who can often tend to tie the knot abroad, he says.

When love knows no bounds

The consequences of this very old tradition are still felt today. In June, Abdallah Salam, a Muslim, married his Christian partner Marie-Joe Abi-Nassif in Lebanon. But due to the great role that religion plays in the country, the couple's marriage is not legally recognized.

Speaking to the press in the summer, Abdallah Salam said that Lebanon's "religious institutions oppose such [interfaith] marriages because it undermines their power." The groom says that "for me, this is about my identity, but for them, it is about power — they are worried they will lose those people who have a civil marriage."

Religious traditions also still have a major influence on Lebanese family life today. Sfeer says that often, parents will oppose their daughters marrying a non-Muslim man. She says "in some strict Lebanese communities, Muslim women who want to marry a Christian risk being subjected to psychological, physical and economic violence." She says while this will not be the case in more tolerant communities, interfaith couples nevertheless still face legal hurdles.

Professor Khalfaoui says that interfaith marriages pose a big challenge for the world's three monotheistic religions that is not likely to go away soon. "Today, in the era of globalization, people of different religions want to get along, they fall in love and want to live together." He says secular societies have a different view on marriages than premodern ones, leading to more tolerant approaches to handling interfaith marriages. In the future, he underlined, theologians of all religions will also need to find approaches to the issue.

A Turkish Wedding on Cyprus

Forty years ago, Ayatollah Ruhollah Khomeini founded the Islamic Republic of Iran. There is little excitement left from those times; even pro-reform forces are exhausted, except for the women among them. (11.02.2019)

Police arrested 15 members of Lehava, a far-right extremist group opposed to inter-marriage between Israelis and Arabs. The arrests came after an undercover investigation by police. (22.10.2017)

A Sikh girl in Srinagar recently tied the knot with a Muslim man after converting to Islam, triggering protests in the region against "forced marriages." But some locals say political groups are exploiting the issue.