Inside Moria′s African neighborhood | Europe | News and current affairs from around the continent | DW | 23.09.2016

Following the fire that destroyed a large part of the Moria refugee camp on Lesbos, life seems to be back to normal - but not for everyone. Marianna Karakoulaki and Dimitris Tosidis report from Lesbos. 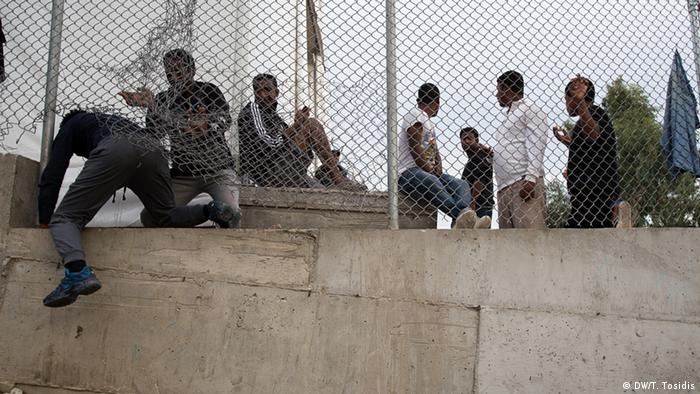 Compared to the refugee camps on the Greek mainland, Moria looks like a terrifying creation. A triple-level wired fence at the front, barbed wire everywhere, and the Greek military, police and riot police constantly present. It seems like an open-air prison with thousands of people living inside. Media access is restricted.

Yet there is another side of Moria - the one at the back of the camp. The fence is less restrictive and there are holes every few meters; refugees who live there use them in order to get outside, to go for a walk around the olive tree fields that surround Moria or relax at the nearby canteens. Some of those who live in this part of Moria describe it as the African neighborhood. 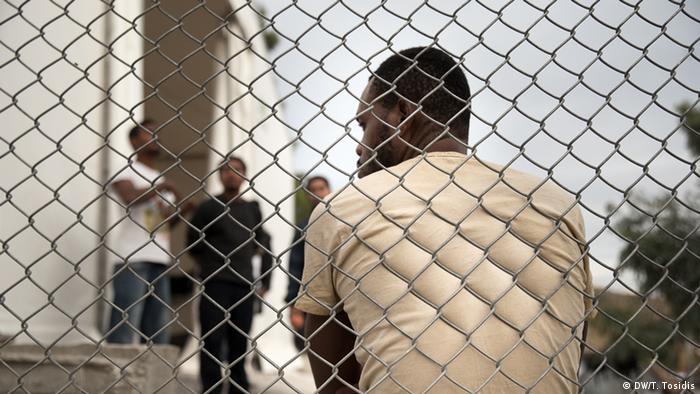 "All of Africa is here, Ghana, Somalia, Eritrea, Nigeria; we all hang out together. But this place is horrible. It is exactly like a prison. The conditions are also horrible. We have no water for showers and sometimes we have to go to the field in order to use the bathroom because the smell and hygiene of the toilets are horrendous," Wafor from Nigeria told DW.

After Monday's fire that destroyed a large part of the camp frustration is visible among refugees. Yet this frustration seems to have been piling up for long. Most if not all refugees* from African countries that spoke to DW feel that they are being mistreated by the asylum services at the camp who - they claim - do not take their asylum claims into serious consideration and instead prioritize the cases of refugees from the Middle East.

Yet most of them fled their countries because they were in grave danger.

Michael, 24, is from Cameroon. He is tall and with an athletic posture but he seems reserved and worried. Under normal circumstances Michael would have been considered an economic migrant; Cameroon is not at war and is not considered a failed state, yet if he returns his life is under threat.

As a university student Michael became involved with a human rights association that focuses a on LGBTQI issues.

"I had to leave Cameroon because of my sexual orientation; if I go back I may even face the death penalty. All I need is protection, nothing else. I do not care about the country that I will end up I just don't want to return to my country because if I do, I am a dead man," Michael told DW..

Homosexuality has been illegal in Cameroon since 1972 when a presidential decree came into force.

"It is impossible for Greece to send someone from Cameroon back; it is dangerous. If someone who has fled Cameroon is caught at the airport, they could be arrested, face prosecution, be tortured and so on. Someone who is a homosexual doesn't stand any chance," Dr Barbara Harrel-Bond, a legal anthropologist and founder of the Refugee Studies Center at Oxford University, told DW.

Michael feels that his case has been disregarded by the asylum service at Moria camp. "They asked me for my name, age, country of origin, if I belong to a tribe, and the reason I fled my country, the languages that I speak. They wrote down the reason I fled Cameroon and gave me an appointment for September 20," he says. When he arrived for his appointment the asylum service changed the date to the end of October claiming that the system is slow. 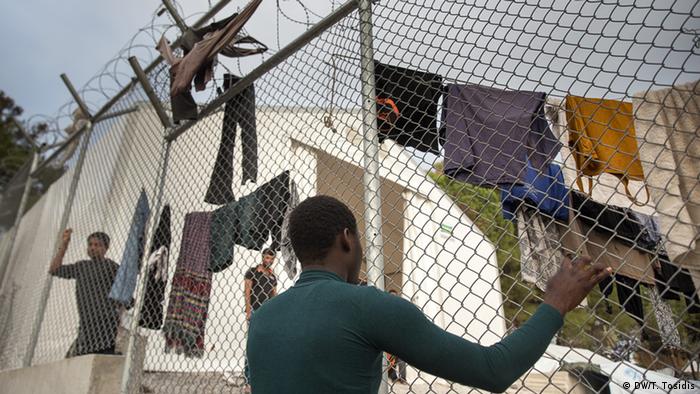 "We are not citizens, we are refugees… or actually we are not even refugees. At Moria we are prisoners," say both Omar from Somalia and Walaa from Eritrea. Both of them fled their countries in order to have a better future and both have been trying to find a way to survive in every country they have been to. Walaa once found himself in Israel yet he was sent to Uganda without the right papers and soon left again.

Somalia has been at war for decades and is described as the world's first failed state. Eritrea is described as a dictatorship and masses of people have fled in recent years. All the refugees from Eritrea that DW spoke to said that they fled because of compulsory military service. "Once you become 18 you must go to the army, but the army service never ends. You start once you become an adult and you may finish at 80," says Walla. 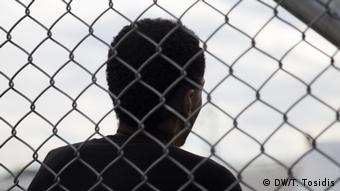 Initially Omar was reluctant to speak but actually turns out to be the most optimistic among them. He has been at Moria for two months but he thinks that at some point he will be able to leave. He is thankful to be alive and is not willing to give up. "I believe in God but I do not think he will come down to earth to save me. I must save myself. That is the reason I fled my country," he says.

The situation that has been created on Lesbos is close to untenable. The EU-Turkey agreement has turned the island into a prison with a failing system. The asylum process is slow and refugees believe they are being discriminated against based on the countries of their origin.

"The major problem is that people who examine asylum claims at the asylum services do not know refugee law and they do not know how to interview people. And the refugee themselves don't have any idea about what refugee law is. So it's an impossible situation," said Dr Harrel-Bond.

*The refugees' names and some facts that may identify them have been changed at their request.

Pope Francis in Greece highlights plight of migrants and refugees 04.12.2021

Pope Francis has described the fates of migrants as a "horrendous modern Odyssey" during his visit to Athens. He was also heckled by an Orthodox priest over centuries-old religious disputes.