Environment Minister Svenja Schulze says concerns over insect extinction have prompted demands for better safeguards. New research suggests 40 percent of insect species could be wiped out over the next few decades. 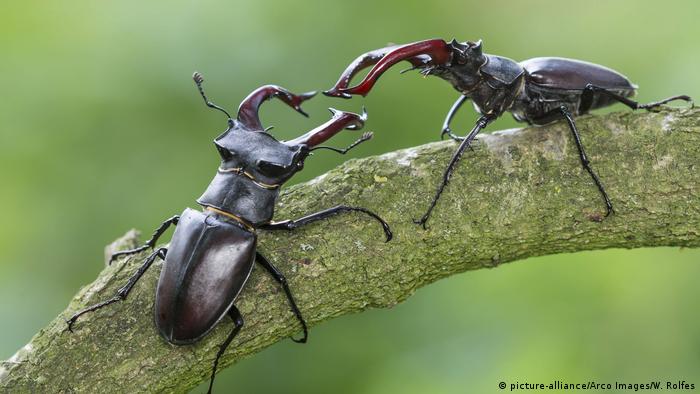 Plummeting numbers of insect species, partly as a result of widespread pesticide use, has prompted Germany's Environment Minister Svenja Schulze to call for a new law to protect bugs.

"We humans need insects," Schulze said. "They deserve protection from their own law. This not only to protect stag beetles and earth bumblebees, but above all ourselves."

Schulze called for Agriculture Ministry funds to be diverted to tackle the issue: "Agriculture receives billions in state resources. I want to use these for solutions that ensure the survival of insects and farmers."

The law forms part of the Environment Ministry's Insect Protection Action Plan, which is due to be presented to the cabinet in April.

According to Bild, the wider plan earmarks some €100 million ($113 million) annually to protect insects, including €25 million for insect research.

Other measures include stricter regulation of pesticide use, including the complete banning of the controversial crop protector Glyphosate by 2023, new night-time lighting restrictions, as insects are disorientated by light, and limits on the use of new land for housing or road projects by 2050.

Concerns about threats to the biodiversity of insects, especially pollinators, has been highlighted by scientists for years. Food security could be at risk, studies have shown.

Last week, a new Australian study published in the journal Biological Conservation, indicated that 40 percent of the world's insect species — including butterflies and moths, bees and wasps, beetles and dragonflies — are in decline, and could become extinct over the next few decades.

Similar research carried out in protected areas of Germany found that insect abundance had declined by three-quarters over less than three decades.

Gaining a head start on the proposed insect law, the southern German state of Bavaria has committed to reducing the use of pesticides, enhancing organic farming, and to expand the number of blossoming meadows to encourage pollination.

A Save the Bees petition, backed by several environmental groups, has already been signed by about 1.75 million people.

German President Steinmeier: 'We only have this one planet'

Celebrated German explorer Alexander von Humboldt was born 250 years ago. Far ahead of his time, he warned of the critical importance of protecting nature. Now Germany's president is following in his footsteps. (14.02.2019)

Migrants in Sicily teach locals how to recycle

One of Sicily's largest cities has been caught between an unexpected migration wave and an increasing trash crisis over the past few years. A local initiative has found a way to tackle both at the same time. (13.02.2019)