France's national team coach has said Bayern Munich's Franck Ribery will not feature in the 2014 World Cup. The player was ruled out of the national squad for Brazil, having failed to overcome a back injury. 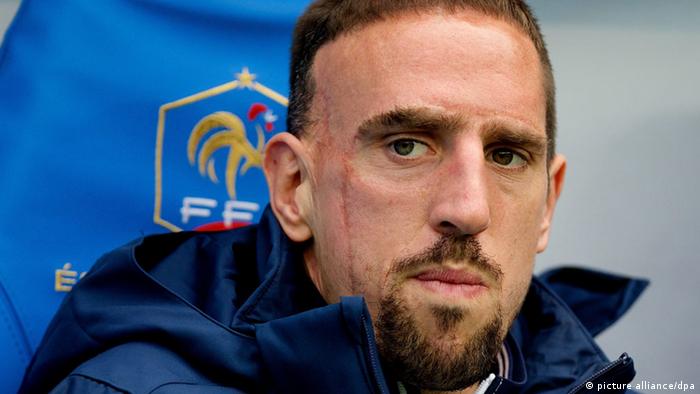 France coach Didier Deschamps said on Friday that 31-year-old winger Ribery would not take part in the World Cup after being unable to shake off a back injury.

"It was in a training session this morning, before he could even join team training, which involved him running and stepping up his routine that he pulled up with a sharp pain in his back," Deschamps told a press conference.

"We had him undergo examinations which unfortunately confirmed that he had aggravated his back problem and there was no question of him being able to either train nor play."

Ribery has scored 16 goals in 80 appearances for his country. The player, who had been due to take part in a friendly match against Jamaica on Sunday, will be replaced by Montpellier winger Remy Cabella.

Ribery, who won an award as UEFA's Best Player in Europe for the 2012/2013 season, missed France's two previous friendlies - a 4-0 win over Norway and a 1-1 draw with Paraguay, but earlier this week was said to have shown "positive signs." While the loss represents a big setback for Les Bleus, Deschamps said the squad was still setting its sights high.

"We have to remain ambitious," he said. "Obviously with Ribery at 100 percent we're a better team, but we'll try and be a good team without him."

Deschamps also had to remove Lyon midfielder Clement Grenier from the 23-man list because of a hip injury, replacing him with Southampton's Morgan Schneiderlin.

The French boss said both players were distraught when they realized they would not be joining the squad.

Last year, Ribery was arguably the standout player in a Bayern side that clinched five titles - the Champions League, Bundesliga, German Cup, UEFA Super Cup and Club World Cup. As well as helping Bayern to another domestic title in record time this year, the player had a key role in taking France to Brazil, scoring five goals during qualification and creating several chances for teammates.