Indonesia: Will the army's ban on 'virginity tests' last?

The Indonesian army says it will no longer conduct the "two-finger" tests on women applying to join the forces, but there are worries that the ban might not last long. 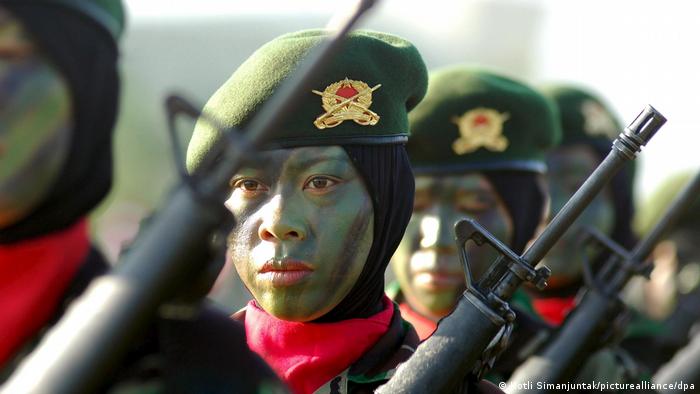 The chief of staff of the Indonesian army, General Andika Perkasa, recently announced that the army will no longer conduct virginity tests on women applying to join the forces.

He was referring to the invasive two-finger examination that was conducted to determine whether female applicants' hymens were intact.

The practice, used in the past by the military to determine recruits' morality, was long condemned by rights groups who called it degrading and traumatic.

The army chief's announcement was welcomed by women's rights activists and female cadets.

But there are also worries that the ban might not last long as the army hasn't so far released any guidelines to make it permanent.

Trauma lingers even after years

Irawati Harsono, a veteran female police officer who personally underwent the test when she signed up to become an officer in 1964, welcomed the decision.

"Of course, I am grateful (for the decision) even though I think it comes too late. It's absurd and ludicrous to think that in this day and age, there is still a virginity test to determine whether a female recruit passes a professional examination," she told DW.

The World Health Organization (WHO) has repeatedly urged countries worldwide to stop the virginity tests, saying that they are unscientific, harmful and a violation of women's and girls' human rights.

The presence of the hymen is not a reliable indication of vaginal intercourse, let alone someone's moral dispensation.

The test, however, had been carried out in the Southeast Asian country for decades, and was even extended to the fiancées of male soldiers as a prerequisite to receiving their commanding officers' written approval for the marriage.

Andreas Harsono, a researcher at the non-governmental organization Human Rights Watch Indonesia (HRW), explained that not only are these tests embarrassing, but that they could also have long-lasting psychological effects that reduce women's self-esteem.

Andreas described the case of a veteran air force officer he has spoken to, who said she was traumatized by the test. Years later during her honeymoon in Bali, she said she froze up and cried inconsolably for an entire night.

The test also lessens the trust that female recruits have in Indonesia's legal system, say activists. "They became apathetic towards the legal system, and distrust that it can be fair towards women," Andreas told DW.

Irawati, the veteran police officer, knows all too well about this injustice. In 1964, she endured a virginity test at Kramat Jati Police hospital as a prerequisite in the recruitment process.

Even though it's a long time ago, she still feels disturbed and resentful when remembering the unfairness that she had to endure to become a police officer.

"Already at the very beginning I felt angry and questioned why I was treated unfairly, since the male recruits did not have to undergo a virginity test," she said.

"Why didn't they just do a psychological test that applies to both female and male recruits? Why do female recruits need to show their moral standards, while the male recruits do not?" she pointed out.

Calls to make the ban permanent

Although the virginity test ban has been put into effect, some remain doubtful that it will last long without any legally binding decree.

Irawati pointed out that there was a period when the discriminative virginity test was banned by a high-ranking officer in the police force in the 1980s. However, the ban only lasted for two years before the practice was reinstated without reason.

Andi Yentriani of the National Commission on Violence Against Women is urging the army chief to take a firm stance and put a permanent end to the practice.

"The army chief's instructions are verbal commands. We hope there will be written guidelines and a decree on the virginity test ban that will serve as a reference for all military branches," she said.

The army chief also instructed that there shouldn't be any discrimination between male and female recruits when it comes to health tests.

It means all candidates, both male and female, must undergo a careful genital examination procedure to determine whether they are fit to undergo a strenuous basic training process.

"Genital testing is still needed for female and male candidates. This means that men also must undergo a careful health screening to leave out anyone who has a sexually transmitted disease," Irawati said. She added that she agreed to such testing if it is applied to both male and female recruits and for medical reasons.

Meanwhile, the chairwoman of the National Commission on Violence Against Women, Andy Yentriani, is of the opinion that genital health examination must be done responsibly and should only be carried out to determine if someone is pregnant, suffering from cancer or has a sexually transmitted disease.

Unlike Irawati and Andy, Andreas Harsono from HRW said the genital testing can be scrapped altogether as he believes it is unnecessary for the female recruits to take unless they specifically mention a health problem related to their reproductive organs.

Indonesia's all-female rock band fed up with focus on their hijabs 05.08.2022

The Indonesian all-female rock trio Voice of Baceprot is currently on tour in Europe. Members say they want media to focus on their musical performances instead of their hijabs.