Protesters waved banners that read "Colonization is not a game," as the 21st Commonwealth Games got underway on Australia's Gold Coast. More than 70 nations and territories are competing in the 12-day multi-sport event. 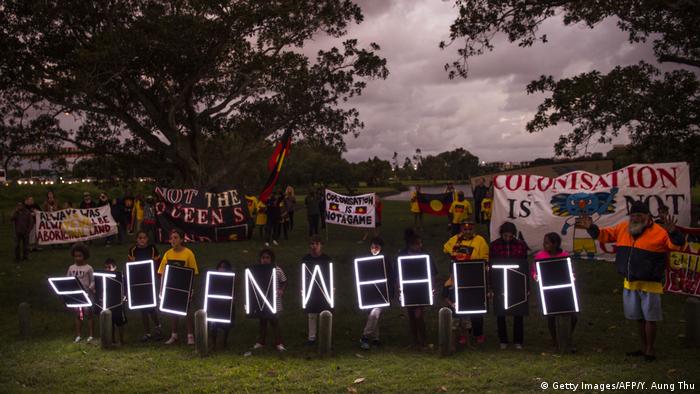 Around a hundred indigenous protesters blocked a road outside the stadium hosting the Commonwealth Games as the opening ceremony got underway in Australia on Wednesday evening.

Flanked by a heavy police presence, the protesters waved black, red and yellow Aboriginal flags and chanted "No Justice, No Games."

Australian Associated Press reported that three demonstrators were arrested by police as they tried to enter the stadium without tickets.

The protesters have labeled the event "The Stolenwealth Games" in reference to the injustices suffered by the Aboriginal community. 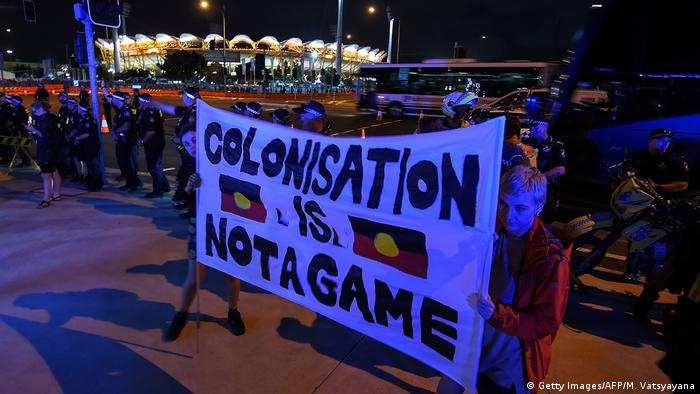 "I'm here to tell the rest of the Commonwealth that the Aboriginal nations of Australia have not ceded their sovereignty," one protest leader blasted through a megaphone.

Brief scuffles later broke out between protesters and police, with activists vowing to target the Games every day until it ends on April 15.

Ahead of the opening ceremony, the protesters blocked the route of the Queen's Baton Relay as it was in progress in the suburb of Southport, causing the run to be halted for about an hour.

Aboriginal communties make up about three percent of Australia's population of 25 million but they remain the most disadvantaged, with higher rates of poverty, ill-health and imprisonment than any other community.

Activists say that despite former Prime Minister Kevin Rudd's national apology in 2008 to Australia's Aboriginal people for past injustices, progress has been slow on the timetable he set for ending indigenous disadvantage. 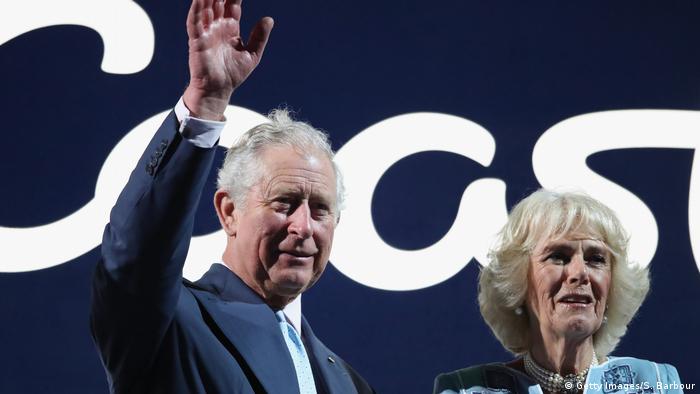 Charles, the future head of state of Australia, pictured with his wife Camilla, Duchess of Cornwall, officially opened the Games

Later in the evening, Prince Charles, who opened the 21st Commonwealth Games on behalf of his mother Queen Elizabeth II, said "sport can be a great force for good which can help create harmony between communities."

The opening ceremony featured symbolic tributes to Australia's indigenous people, including a traditional welcome by a local indigenous elder and a smoking ceremony near the end. It also highlighted imagery, scenes and sounds of the ancient culture.

Some 6,600 athletes from 71 nations and territories — all of them former British colonies that now make up the Commonwealth of Nations — are taking part in 18 sports (seven para-sports) for a chance to pick up a total of 275 gold medals.

Marches have taken place across Australia in protest at a national holiday many see as offensive to indigenous people. Divisions over Australia Day have been growing in recent years. (26.01.2018)