Marches have taken place across Australia in protest at a national holiday many see as offensive to indigenous people. Divisions over Australia Day have been growing in recent years. 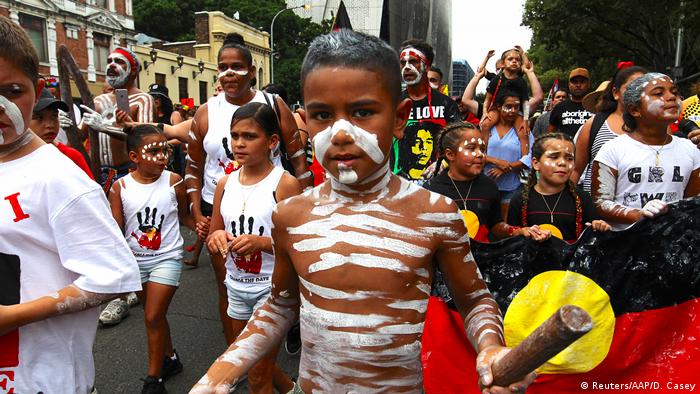 Tens of thousands gathered to march in major cities across Australia on Friday to protest at a national holiday that commemorates the arrival of the first British settlers in 1788.

Many people feel that Australia Day is disrespectful to the country's indigenous people, as it also marks the start of Britain's oppression of those who had been living on the continent for at least 65,000 years previous to the arrival of the British First Fleet.

- More than 25,000 people, both Aboriginal and non-Aboriginal, rallied in Australia's second biggest city, Melbourne, some chanting "always was, always will be Aboriginal land.

- Similar, but smaller, demonstrations were held in Sydney, Hobart, Adelaide and other urban centers.

- Protesters were calling for a treaty between indigenous and non-indigenous Australians, an end to inequality and for the date of Australia Day to be changed.

World in Progress: The plight of Australia's indigenous people

- The day also saw a number of celebrations, which kicked off with an Aboriginal welcome ceremony and traditional dance display on the edge of Sydney's iconic harbor.

Prime Minister Malcolm Turnbull said in a recent speech that he opposed calls by some to change the date of the national holiday to a less controversial one, saying this was taking "a day that unites Australia and Australians and turn it into one that would divide us."

However, Lidia Thorpe, an Aboriginal legislator from the eastern state of Victoria, last week called for flags to be flown at half-mast on Australia Day "to recognize the grief and suffering caused to our First Nations people." She says she was sent rape and death threats in response.

On January 26, 1788, Captain Arthur Phillip landed with 11 ships in Sydney Cove, near where the famous Opera House stands today, to establish a penal colony.

After the arrival of the British settlers and convicts, the Aboriginal population decreased from an estimated 1 million to just 100,000 by 1910, with most killed by the colonists or from the diseases they introduced.

Indigenous people in Australia, who now make up some 3 percent of the country's population of 24 million, remain disadvantaged to this day, with their communities suffering higher rates of joblessness, ill-health, domestic violence, alcohol abuse, suicide and incarceration than any other group.

Protests on Australia Day date back to 1938, when some 100 indigenous people marked a "national day of mourning" in the eastern city of Sydney.

National park authorities have issued a ban on the controversial practise of climbing the iconic rock. Aboriginal groups have long decried the practise as a desecration of a sacred site. (01.11.2017)

Albert Namatjira was a world-renowned watercolor painter in the first half of the 20th century. But after his death, his relatives eventually lost their share of his copyright, plunging the family into poverty. (14.10.2017)