Protesters in India's ethnically diverse northern regions clashed with police, as the contentious bill passed the upper house of parliament. Muslims will be excluded from the fast-track citizenship laws. 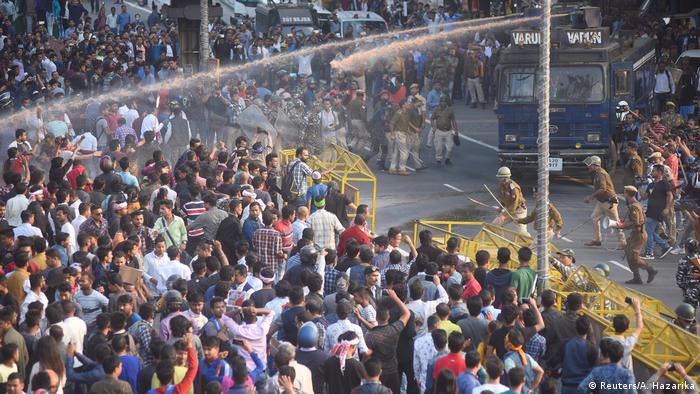 India's government cleared the final hurdle to enact its citizenship law on Wednesday, after the upper house of parliament approved it. The controversial legislation will fast-track citizenship claims for immigrants from three neighboring Muslim-majority countries.

The legislation was approved 125-105 by the upper house, after the lower house voted in support of it late on Tuesday.

Critics of the bill have said it undermines the country's secular constitution and discriminates against Muslims; Narendra Modi's Hindu nationalist government argues that the law is a provision for non-Muslims fleeing persecution in their previous homes.

"A landmark day for India and our nation's ethos of compassion and brotherhood!" Prime Minister Narendra Modi tweeted. "This Bill will alleviate the suffering of many who faced persecution for years," he added.

Buddhists, Christians, Hindus, Jains, Parsis and Sikhs, who fled Afghanistan, Bangladesh and Pakistan before 2015 will all be eligible for fast-track citizenship.

Modi's government dismissed the criticism, saying Muslims from those three countries are excluded from the bill because they do not face discrimination in those countries.

Home Minister Amit Shah defended the bill, saying that "for India's Muslims, there is nothing to worry about, nothing to debate."

"They are citizens, and will remain citizens," Shah added.

The army deployed troops in Tripura state and put reinforcements on standby in neighboring Assam, as police faced off with thousands of protesters, using water cannons and tear gas.

Students at Aligarh Muslim University took part in a hunger strike to protest the bill.

"The government does not know what it has unleashed. These protests will continue," Akhil Gogoi, a human rights activist in Assam, told DW.

Many Muslims in India say they have been made to feel like second-class citizens since Modi came to power in 2014 and began enacting policies to match his party's Hindu nationalist platform.

"The Indian government is creating legal grounds to strip millions of Muslims of the fundamental right of equal access to citizenship," Human Rights Watch said Wednesday.

"This bill is discriminatory and divisive by design. It is not about protecting persecuted refugees. The only motive is telling Muslims that they are second class citizens in India," said Yogendra Yadav, head of the political advocacy group Swaraj India.

"In 1935 there were citizenship laws to protect people with German blood ... today we have a faulty bill that wants to define who true Indian citizens are," he said.

An effort by the state of Assam to tackle illegal immigration going back five decades has identified 1.9 million people who are ineligible for Indian citizenship. Critics say the list discriminates against Muslims. (31.08.2019)

India is to be a unified nation, says Indian Prime Minister Narendra Modi. People in Kashmir are experiencing what that entails. The region is a tinderbox, also because of Modi's politics, writes journalist Peter Sturm. (15.08.2019)