Although abortion is legal, over two-thirds of abortions in India are considered to be risky. Barriers to safe abortion include a shortage of doctors in rural areas, a lack of confidentiality and widespread stigma. 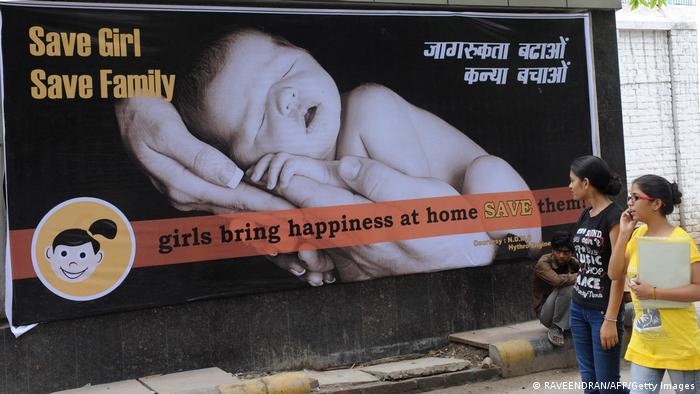 Chitra (name changed) had to travel more than 40 kilometers (25 miles) from her home to the city of Gurgaon to get an abortion so that her family members would not find out.

"The contraceptive failed, and I did not wish to have a child," she said. "I was repeatedly questioned and treated rudely by the doctors as well as nurses and other staff at the clinic," the 20-year-old student told DW.

"My boyfriend was there to support me, but I was afraid they would force me to ask for my family's permission. I would never want to go through this ordeal again," she said.

Abortions have been legal in Indiasince 1971. An amendment to the Medical Termination of Pregnancy (MTP) Act last year expanded women's access to safe and legal abortions from 20 to 24 weeks.

It also added a confidentiality clause, and included failure of contraception as a reason to seek termination of pregnancy, regardless of a woman's marital status.

"As the next step, we need to work towards advocating a more rights-based approach by giving women greater autonomy and choice," said Dr. Nozer Sheriar, who serves on the technical advisory committee for the World Health Organization (WHO).

Women die 'every day' due to unsafe abortion

A United Nations Population Fund (UNFPA)'s State of the World Population Report 2022 stated that about 67% of abortions in India are unsafe.

It also said that eight women die each day due to unsafe abortions, which were the third most common cause of maternal mortality in the South Asian nation.

An abortion is considered safe if it is done using a method recommended by the WHO. The UNFPA report noted that the amendment to the MTP Act in 2021 appeared encouraging, but added that a lot more needed to be done to prevent unsafe abortions and maternal mortality.

In India, a woman does not require the approval of her husband, partner or family if she is an adult of "sound mind" and wishes to get an abortion.

Despite this, there are several hurdles that women face. "In a society that is highly patriarchal, women find it difficult to access abortion," Kajal Jain, program coordinator at the Pune-based Mahila Sarvangeen Utkarsh Mandal (MASUM) NGO told DW.

"Healthcare providers often ask women to get the permission of their husband, or family members, even though it is not required by law. Often, the privacy and confidentiality of the woman is not protected."

"Marginalized women, such as sex workers, HIV-positive women, tribal women, single women, and youths find it even more difficult to access abortion. And a lack of access is what leads to unsafe abortions," Jain added.

Another issue which many women face is that of geographical access. About 66% of India's population lives in rural parts of the country, where there is a severe shortage of obstetrician-gynecologists, according to the Indian health ministry's 2019-20 Rural Health Statistics Report.

As a result, many abortions are often performed by midwives, auxiliary nurses, or birth attendants and are, therefore, considered unsafe.

The 2015-16 National Family Health Survey (NFHS) showed that only 20% of abortions took place in public healthcare facilities. Private clinics and hospitals, which are concentrated in urban India, were responsible for 52% of abortions.

Dr. Rupali Mishra, who runs a medical and diagnostics center in New Delhi, told DW that many patients cameto the center after purchasing illegal at-home abortion kits or getting surgical abortions from fraudulent doctors. "There are many complications and risks with such patients," she said.

'Recognize abortion as a reproductive need'

The UNFPA report added that girls between the ages of 15 and 19 were at the highest risk of dying from an abortion-related complication. Unintended pregnancies are heavily correlated to lower education and income levels, especially for younger women and girls.

"If comprehensive sexuality education is not offered in her school, she may lack accurate information. Pregnancy may be her default option because she has few opportunities and choices in her life. Without a chance to finish her education, for instance, she may not see a reason to postpone childbearing," the report said.

According to Section 312 of the Indian Penal Code, "causing a miscarriage" is considered to be an offense, so the MTP act was then introduced to protect doctors who provide abortions. "The MTP bill only protects the doctor from criminalization of abortion services," said Jain.

"The act, which comes from a legal standpoint, needs to be more women-centric. It needs to recognize abortion as a genuine reproductive need, and not punish women," she added.

India: Why are female community health workers on strike?

Despite numerous campaigns and popular slogans over the years, the fondness for sons remains strong among Indian parents. Many of them continue to see boys as an investment and girls a liability. Murali Krishnan reports.