Latin America, which accounts for one-third of the total global COVID-19 deaths, is struggling to secure vaccines. The region's ambivalence toward a patent waiver for vaccines has left many perplexed. 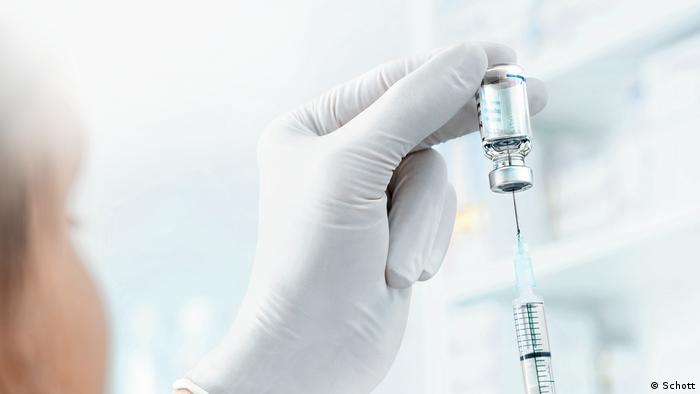 In May, India and South Africa called on the World Trade Organization (WTO) to temporarily waive intellectual property (IP) rules related to COVID-19 vaccines, medicines, diagnostics and other technologies.

The draft was co-sponsored by more than 60 countries that had warmed up to the idea. It was initially proposed in October last year amid snail-paced vaccine deliveries during the pandemic as rich countries cornered the bulk of the supplies.

The reasoning was that waiving parts of the Agreement on Trade-Related Aspects of Intellectual Property Rights (TRIPS Agreement) would allow drugmakers in poor countries to produce effective vaccines without worrying about being sued for patent infringements, and speed up the end of the pandemic, which if allowed to linger could see the emergence of vaccine-resistant coronavirus variants.

The countries backing the revised proposal ranged from Eswatini to Indonesia and Pakistan to Vanuatu, adequately representing regions with some of the lowest vaccination rates globally. However, Latin America, the region worst hit by the pandemic and desperately in need of vaccines, only saw Venezuela and Bolivia proposing the IP waiver, leaving many experts confounded.

Argentina and Mexico have voiced their support for a temporary patent relief, while Brazil has only recently endorsed the idea after initially opposing it. Most other Latin American countries, including Chile, Colombia and Peru, are choosing to remain ambivalent or simply stay on the sidelines, fearing a backlash from pharma companies they are relying on to meet the vaccine shortfall and a worsening of diplomatic relations with richer countries like those in the European Union opposing an IP waiver.

"They're missing an enormous opportunity because they're being offered policy space that they should be taking. This doesn't come up often," Viviana Munoz Tellez, from the Geneva-based South Centre think tank, told DW. "The fact that the United States is backing the TRIPS waiver actually gives them a lot of political clout already to say, well, you know, this is something that even the United States supports." 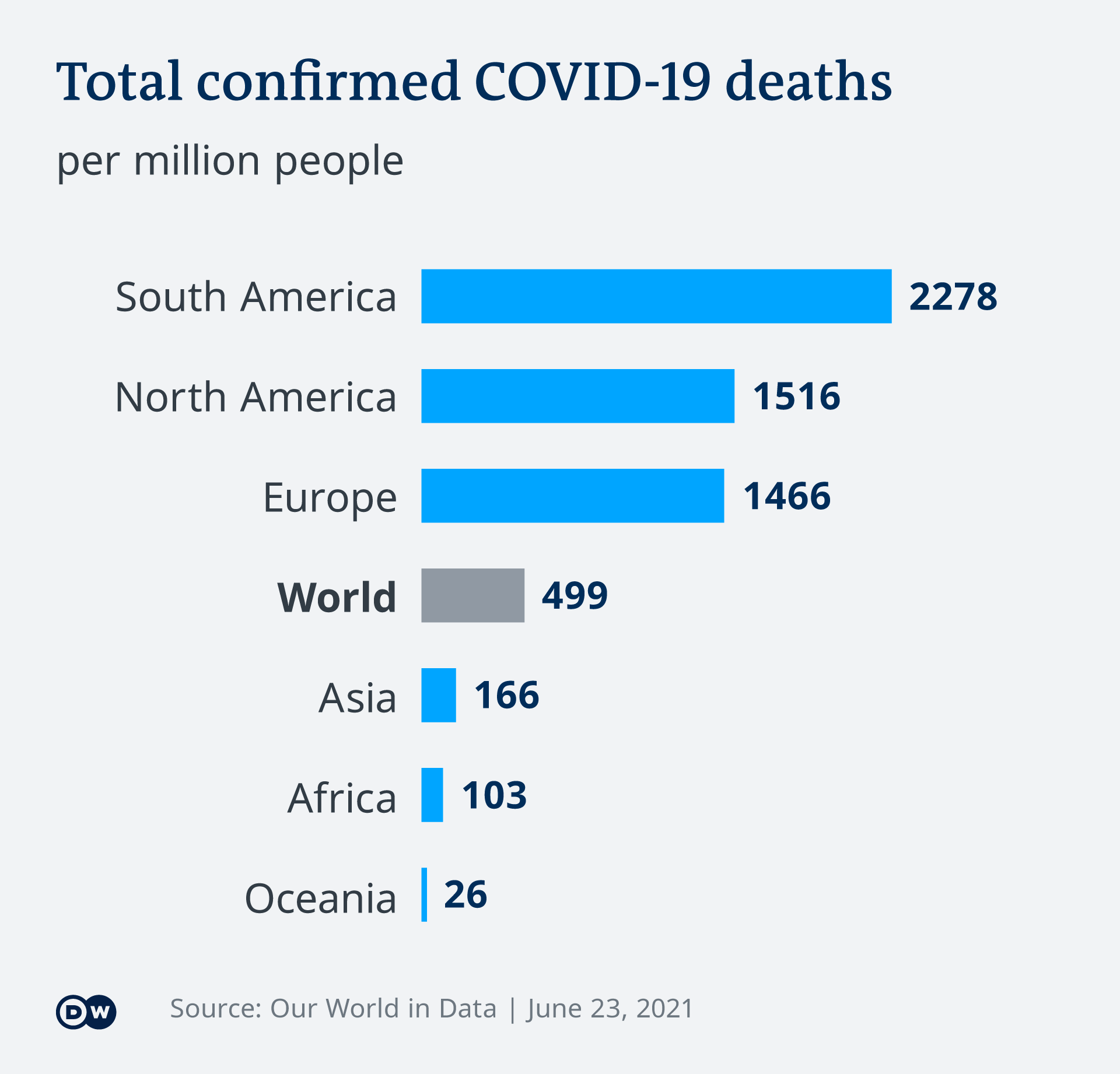 Latin America has emerged as the epicenter of the pandemic, with coronavirus variants driving a spike in cases across the region. Despite being home to just 8% of the world's population, the region now accounts for a third of all COVID-19 deaths globally.

The region's economy saw a contraction of 7% last year, the sharpest in the world. The International Monetary Fund expects the recovery to be slow and divergent with some Latin American economies projected to return to their pre-pandemic levels only in 2024.

Aside from Chile and Uruguay, which have relied heavily on the Chinese Sinovac vaccine, Latin American governments have scrambled to get populations vaccinated. Only a quarter of people have received at least one dose across Latin America. The vaccination drive has been hit by slow deliveries from the COVAX facility that governments in the region were banking on. The WHO-backed facility has distributed less than 10% of the doses expected to have been delivered by now.

Desperate to speed up vaccinations, governments have been forced to strike bilateral deals with vaccine makers such as Pfizer and J&J. They worry that supporting a patent waiver could potentially jeopardize their agreements with pharma companies, which have been zealously defending their patents.

"This seems to be a motivation of some politicians who say why do we want to rock the table when we're still trying to negotiate with the firms to get more access to vaccines," Munoz Tellez said. 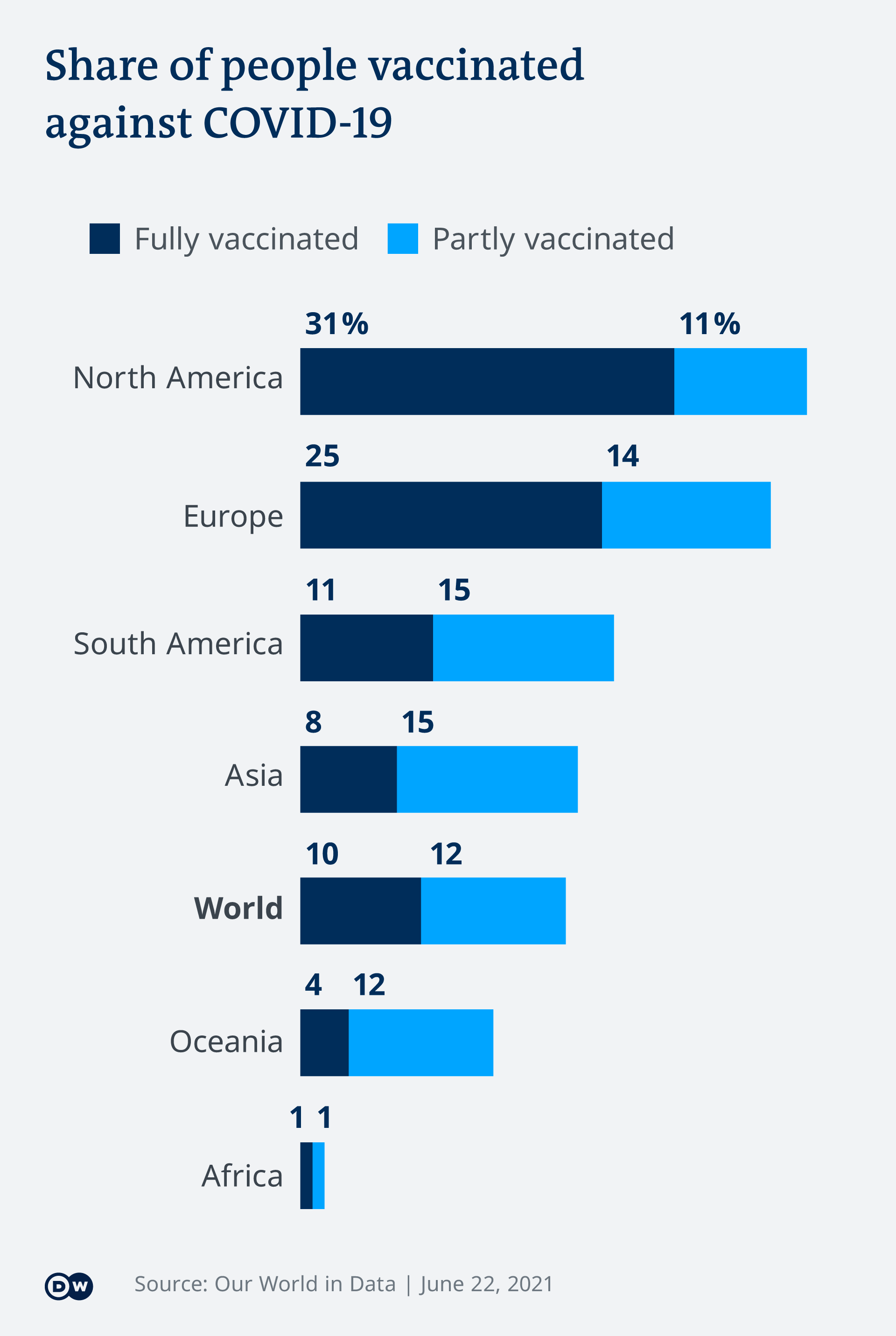 Felipe Carvalho, from the Brazilian chapter of nonprofit Doctors Without Borders, told DW that governments' fears stem from the "abusive" clauses that they have been pushed to agree to as part of the supply deals.

"It's quite easy under those contractual conditions for pharmaceutical companies to threaten: "If you go through with that political position, I can interrupt supply, and, under the contract, I'm allowed to do that," Carvalho said DW.

Though there has not been any direct evidence that drugmakers have threatened to divert supplies, a major pharmaceutical industry association that represents companies such as Pfizer, J&J and AstraZeneca had warned Brazil in April that, if it opted for compulsory licensing of vaccine patents, then pharma companies might prefer to supply other markets.

"This is not retaliation. The demand is much bigger than the supply, and they may find it more advantageous from an economic point of view to sell to countries that do not break patents," Elizabeth de Carvalhaes from Interfarma was quoted as saying.

A Pfizer spokesperson denied any role in influencing governments' stance, saying that "while Pfizer has been vocal about its opposition to the TRIPS IP waiver, we have no control over the actions of individual governments in Latin America or elsewhere."

The apparent official apathy toward IP waivers in Latin America is a result of the fragmentation of a region that not so long ago boasted of strong regional collaboration, including on health matters thanks to organizations such as UNASUR (Union of South American Nations) and Mercosur.

In the absence of any united front in the fight against the pandemic, countries are having to individually negotiate with drugmakers, handing them leverage that they are more than happy to exploit.

The rise of right-wing governments and autocrats in the region has made it difficult for others to come up with a joint position on the TRIPS waiver proposal, which has been co-sponsored by Venezuelan leader Nicolas Maduro's authoritarian government.

Munoz Tellez said the rise of nationalist leader Jair Bolsonaro in Brazil has also dealt a big blow to regional cooperation. The Brazilian president has drawn flak for his government's botched response to the pandemic, which has claimed more than 500,000 lives.

"Historically, Brazil was the strongest voice for Latin America, particularly on IP and public health issues. And, because of the current situation of the government and the position of Bolsonaro, Brazil has been out of that picture," she said.

Wealthy nations such as the United Kingdom and groupings including the EU have opposed patent waivers, saying they would stifle innovation at pharmaceutical companies by robbing them of the incentive to make huge investments in research and development.

Drug companies argue that the ban would not boost supply, given how complex vaccine manufacturing is.

"Our mRNA vaccine requires 280 components from 86 suppliers located in 19 different countries. Producing it is not as simple as sharing the 'recipe,' as some may suggest," the Pfizer spokesperson told DW. "We believe it is unrealistic to think that a waiver will magically facilitate ramping up so quickly as to address the vaccine supply issues in a safe and quick manner."

Carvalho disagrees. He points to strong manufacturing capabilities in Brazil, Argentina and Mexico, which are producing Sinovac, AstraZeneca/Oxford and Sputnik V vaccines.

Cuba has developed its own coronavirus vaccine. The three-shot Abdala vaccine had proved nearly 93% effective in last-stage clinical trials, the government said last week. Another Cuban vaccine, Soberana 2, had proved 62% effective with only two of its three doses.

Munoz Tellez says the TRIPS waiver could also benefit those countries that do not have the production capacity as it would lead to more avenues for procurement. For example, Bolivia has signed a deal for a potential 15 million doses of J&J's COVID-19 vaccine that would be produced by Canadian company Biolyse Pharma once the TRIPS waiver comes through.