India pushes ahead with Rohingya deportation amid Myanmar crackdown | Asia | An in-depth look at news from across the continent | DW | 24.03.2021

India pushes ahead with Rohingya deportation amid Myanmar crackdown

Despite the volatile situation triggering an influx of Myanmar citizens into India's northeastern Mizoram state, New Delhi remains determined to deport the Rohingya to their homeland. 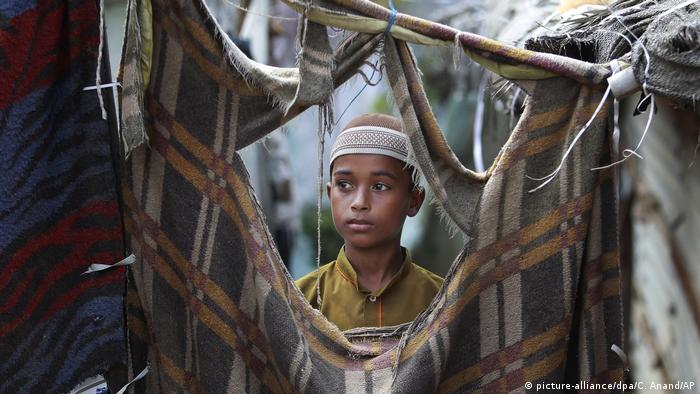 Around 40,000 Rohingya reside across the country, with some 5,000 living in the northern Jammu and Kashmir region

Fleeing from the military crackdown in Myanmar, Lin Lin Khaing (name changed), 30, a nurse in Hakha district of northern Chin state, knew her journey to India would be fraught with danger.

Yet she decided to embark on the perilous trip to leave behind the haunting memories of military repression in Myanmar and start a new, peaceful life in India's northeastern Mizoram state.

Evading military patrols and slogging through dense jungles, Khaing reached the Mizoram frontier only to find it sealed by Indian border guards.

"She is not alone. Nearly a thousand people, mostly civilians, are stuck on the other side of the border without food because Indian security forces are not allowing them in," Yung Thang, who works for an NGO that looks after the interests of the Chin community, told DW.

Even some Myanmar police have crossed into India to escape taking orders from the military junta now ruling the country.

Over the past few weeks, security forces in Myanmar have been clamping down on people protesting the military's takeover of power and demanding the restoration of a democratically elected government.

Thousands of demonstrators have been put behind bars and hundreds have lost their lives so far.

The volatile situation has triggered warnings of a brewing humanitarian crisis along Myanmar's border with neighboring India, as many Myanmar citizens attempt to flee the crackdown.

The Indian state of Mizoram — which shares a porous 400-kilometer border with Myanmar, mostly along the Tiau River — is particularly affected by the influx, as its people share deep ethnic ties with communities on the other side of the border like the Chins.

Indian border guards, however, have been sealing the border and pushing back those trying to enter the country.

The authorities' handling of the situation hasn't gone down well with Mizoram. The state's Chief Minister Zoramthanga last week wrote a letter to Indian Prime Minister Narendra Modi seeking his intervention to resolve the humanitarian situation.

Zoramthanga requested that New Delhi offer political asylum to those fleeing Myanmar, saying that "a human catastrophe of gigantic proportions is happening in Myanmar right in front of our eyes."

It's not yet clear if New Delhi will agree to offer political asylum to these people.

India, which has sought to build closer ties with Myanmar to counter China's influence, has not condemned the military coup.

India is already home to thousands of asylum-seekers from Myanmar, including the Rohingya — a Muslim minority in Buddhist-dominated Myanmar — who fled the country during previous bouts of violence.

The United Nations says there are 16,000 registered Rohingya in India, but many more are believed to be undocumented.

Overall, an estimated 40,000 Rohingya reside across the country, with some 5,000 living in the northern Jammu and Kashmir region.

Modi's Hindu-nationalist government has for years asked regional authorities to identify and deport them. New Delhi has described the Rohingya as a security threat, accusing them of having links to the "Islamic State" and other Muslim extremist groups.

Community representatives have denied the allegations.

The latest influx from Myanmar comes at a time when Indian police have detained over 150 Rohingya living illegally in Jammu and Kashmir.

Dozens of them are in a makeshift "holding center" at Jammu's Hira Nagar jail after local authorities conducted biometric and other tests on hundreds of people to verify their identities.

A process has been kick-started to deport them to Myanmar. Jammu's inspector general of police, Mukesh Singh, told DW: "The process of deportation of the Rohingya has started. After their nationality verification with the Myanmar government, they will be deported."

One of the detainees is Abdul Ali, who crossed into India in 2012 along with his wife Meenara. They have been living in Jammu since then.

"This separation is painful. My two kids are asking for their father. I have no food to feed them, no one to turn to," she told DW.

Rohingya targeted because of religion?

Officials did not say why there was a push now to deport the stateless group, who have long suffered persecution in their homeland, where they are denied freedom of movement and citizenship.

Human rights groups have called on New Delhi to follow the international principle of non-refoulement, which prohibits sending people back to places where their lives are in danger.

They have urged India, the world's largest democracy, to give them humanitarian assistance.

Prashant Bhushan, a renowned lawyer in India, told DW that the deportation of the Rohingya would be "illegal and there is a significant danger of them being subjected to violence in Myanmar."

Rohingya leaders, meanwhile, accuse the Modi government of targeting the community for being Muslim.

"There are other refugees in India also, but the government is targeting only Rohingya because of our religion," Sabber Kyaw Min, director of the Rohingya Human Rights Initiative, told DW.

The Rohingya stress that the current political and security conditions are too dangerous for them to return to Myanmar.