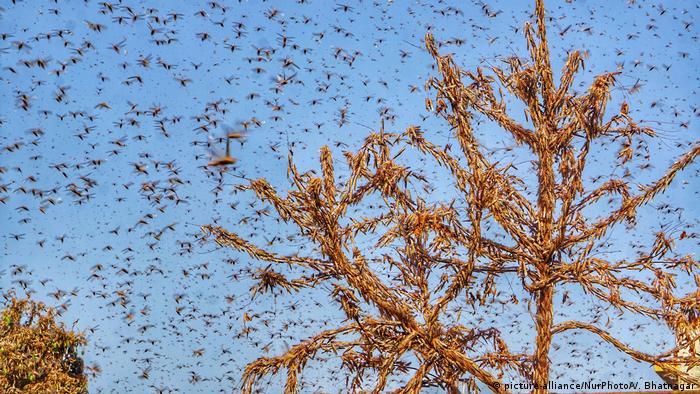 On Tuesday, Indian authorities sent out drones and tractors to track desert locusts and spray them with insecticides, in one of the worst locust swarms seen by the country in nearly 30 years. With about 50,000 hectares of cropland destroyed by locusts, India is facing its worst food shortages since 1993.

"Eight to 10 swarms, each measuring around a square kilometer, are active in parts of Rajasthan and Madhya Pradesh," K.L. Gurjar, the deputy director of India's Locust Warning Organization, told news agency AFP. The locusts have also made their way to other states of India including Maharashtra and Uttar Pradesh.

On Monday, a swarm of locusts infested the city of Jaipur in Rajasthan, after traveling into India from Pakistan. Gurjar warned that the locusts could move towards the capital city of Delhi if wind speed and direction was favorable. 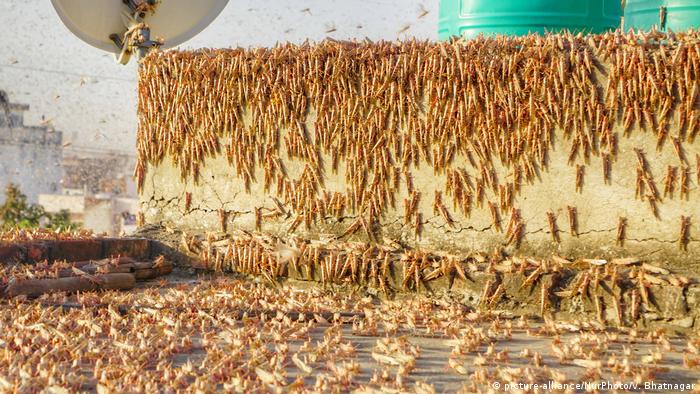 Why a locust swarm is alarming

According to the Food and Agricultural Organization (FAO) desert locusts typically attack the western part of India and some parts of the state of Gujarat from June to November. However, the Ministry of Agriculture's Locust Warning Organization spotted them in India as early as April this year.

A swarm of 40 million locusts can eat as much food as 35,000 humans, according to FAO estimates. The current swarm has destroyed seasonal crops in the states of Rajasthan and Madhya Pradesh. This will lead to lower production than usual and a rise in prices of foodstuff.

An agrarian crisis and subsequent food inflation will severely impede India's response to the coronavirus pandemic. Thousands of migrant workers have died from hunger after India suddenly imposed a nationwide lockdown to contain the spread of the coronavirus, leaving workers penniless. An agrarian crisis because of a locust swarm will further hamper relief efforts of the government.

Heavy rains and cyclones in the Indian Ocean are being cited by experts as reasons for increased breeding of locusts this year. The attack is also spread over a wider geography in India. The FAO has warned that the locust infestation will increase next month, when locusts breeding in East Africa reach India.

Other parts of the world affected by locusts

India isn't the only country attacked by a huge swarm of locusts this year. Pakistan,countries in East Africa, and Yemen have also faced the desert pests and their destruction. In February, Pakistan declared a national emergency because of locust attacks in the eastern part of the country. The pests damaged cotton, wheat, maize and other crops.

Earlier this month, the FAO said that it had made headway in dealing with the locust invasion by saving 720,000 tons of cereal in 10 countries.

Why are locusts so destructive?

What are millets and can they help create global food security? 09.06.2022