India: How air pollution is affecting people in Delhi's slums 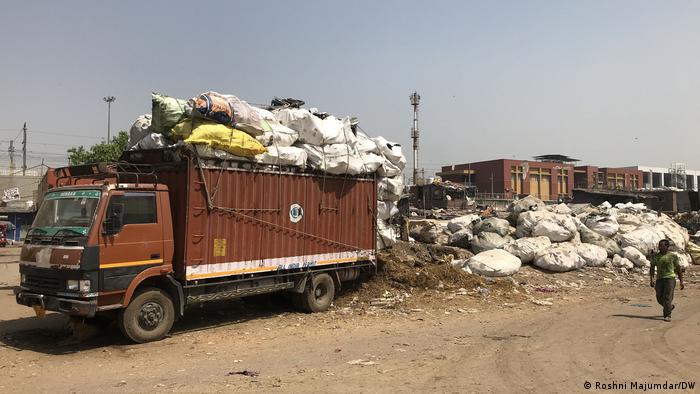 The Ghazipur landfill is now almost as tall as India's iconic Taj Mahal.

This week, authorities in India's capital New Delhi released a new plan of action to curb air pollution over the course of summer, as a severe heatwave bakes the city.

The plan focuses on reducing pollution from road dust and the burning of waste, which are major contributors of fine particulate matter (PM2.5 and PM10) that pose the greatest threat to human airways.

Additionally, the city residents are inhaling smoke from burning crop waste in the neighboring states of Haryana, Punjab and Uttar Pradesh. The city is among the worst-polluted in the world.

To understand the impact of pollution on people most exposed to harmful air, DW recently visited the Ghazipur landfill, considered India's tallest rubbish mountain, and its surrounding areas.

Tons of garbage dumped at the site daily

The landfill, located in eastern Delhi, is already more than 65 meters (213 feet) high, only a few meters short of the height of India's iconic Taj Mahal.

India: Pollution in Delhi forces some to consider leaving

Ghazipur was opened in 1984 and reached its capacity in 2002 when it should have been closed. But the city's waste has kept on arriving each day in hundreds of trucks.

The landfill, which covers an area that's equivalent to over 40 football pitches, is rising by nearly 10 meters a year with no end in sight to its foul-smelling growth.

It's estimated that about 2,000 tons of garbage is dumped at the site each day.

The air quality index, which measures PM2.5 levels, or particulate matter smaller than 2.5 micrometers, in the area is 12 times above the World Health Organization's (WHO) air quality guideline value.

The WHO revised the air quality guidelines in September 2021, saying that the average annual PM2.5 concentrations should not be higher than 5 micrograms per cubic meter.

Serious health risks to people in the area

The area surrounding the landfill teems with people since there are hundreds of dairy farms and wholesale livestock markets in the immediate periphery. 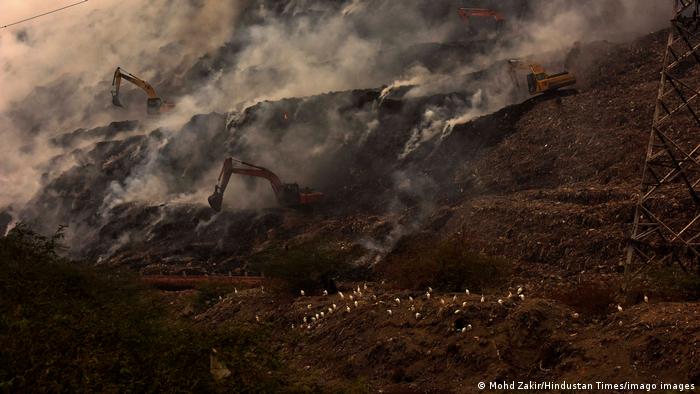 Fires, sparked by methane gas coming from the dump, regularly break out and take days to extinguish. They have become a major cause of concern for residents in the area.

Muskan, a 22-year-old living in a slum near the landfill, says her house was destroyed by a fire and that she's lost count of such incidents in the locality. "It's dusty and it's hard to breathe all the time. I feel terrible being here."

Ajay Singh Nagpure, head of air quality at the World Resources Institute in India, said that the toxicity of the air near landfills poses serious health risks for people living there.

"Continuous informal burning of plastics and compostable waste leads to a number of health concerns," Nagpure told DW, pointing out that pregnant women give birth prematurely, while children develop asthma and suffer from shortness of breath.

"Our exposure to air pollution and how it impacts our health can be influenced by a variety of factors, including our occupation and our daily activity patterns," says Pallavi Pant, an air quality expert.

Muktarun, 36, said she had lost everything when a fire engulfed her house a few years ago.

"We are always struggling to make ends meet. It's very hard to think about anything else," she told DW.

In addition to the continuous threat of fire and poisonous smoke, many people living in the slums do not have access to cleaner cooking fuels like Liquified Petroleum Gas (LPG) and rely on the burning of biomass, said Bhavreen Kandhari, an environmental activist in Delhi.

Even though a power plant near the landfill converts thousands of tons of solid waste into electricity every day, it would take a long time before "legacy waste" or the mountain of rubbish that has accumulated over the years can be cleared, said Kashyap.

People will have to put pressure on authorities to tackle air pollution in the same way they would complain to officials if water ran out, experts stressed.

The mixing up of waste with recyclable and combustible material dumped in the yard needs to end, Kandhari said. "There has to be proper waste management and segregation at source," the expert added.

A picturesque ecotourism destination is offering visitors a place to unwind and learn about the outdoors.