Tens of thousands of Indian farmers protesting agricultural reforms have driven a convoy of tractors into New Delhi as the capital celebrates Republic Day with a military parade.

New Delhi police fired tear gas at the protesting farmers after they broke through barricades and stormed the historic Red Fort, waving farm union flags from the fort's ramparts.

The protesters were able to use India's national Republic Day, and storming the fort, as a symbolic challenge to Modi's government.

A military parade in the capital, which celebrates the adoption of the Indian constitution in 1950, was also overshadowed by the vast tractor rally.

DW's India correspondent Nimisha Jaiswal shared a video on Twitter of jubilant farmers after they broke through police lines, saying: "After tear gas and baton charges, farmers are exuberant as tractors, horses and crowds overrun the roads, and security forces leave the scene."

The protesters used cranes and ropes to pull down road blocks far from their approved marching route, forcing riot police to fall back, witnesses told Reuters. 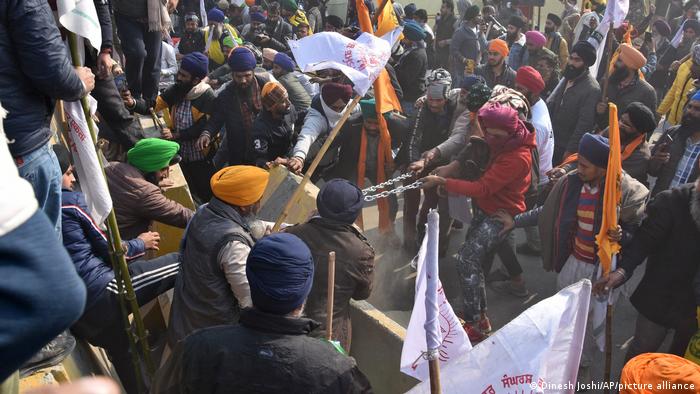 A statement from the group of farmers unions explained that only one of the several protest parades had deviated from its pre-arranged route.

"Except for one group...our news is that all parades are happening on the pre-decided routes along with police," they said.

Why are farmers in India protesting?

On January 13, India's Supreme Court suspended the implementation of the laws to give time for farmers' unions and the government to work on a solution.

A series of talks have fallen flat, and the farmers' unions have maintained that they want the laws rolled back — a demand firmly rejected by the government which has instead offered to amend the laws.

"We want to show Modi our strength,'' Satpal Singh, a farmer who marched into the capital on a tractor along with his family of five, told AP.

"We will not surrender," he said.

Agricultural jobs make up nearly half of India's workforce, and the on-going protests represent one the biggest challenges to Modi's government to date.

"Modi will hear us now, he will have to hear us now," said Sukhdev Singh, a farmer from the agriculturally important northern state of Punjab, as he marched past the barricades.

More than half of India's farmers are in debt and more than 20,000 committed suicide in 2018 and 2019, according to official statistics.

The massive size of the workforce, combined with the fact that agriculture only comprises around15% of India's GDP means farmers are finding it harder to make a living.

Devinder Sharma, an agriculture expert who campaigns for income equality for Indian farmers, said the protests were not just aimed at reforming the new law, but at "challenging the entire economic design of the country.''

"The anger that you see is compounded anger,'' Sharma said. "Inequality is growing in India and farmers are becoming poorer. Policy planners have failed to realize this and have sucked the income from the bottom to the top. The farmers are only demanding what is their right."