India: Fake vaccines undermine fight against COVID | Asia | An in-depth look at news from across the continent | DW | 01.07.2021

The South Asian country has reported a rising number of fake and unauthorized COVID vaccinations, prompting authorities to regulate vaccination centers and crack down on "organized syndicates." 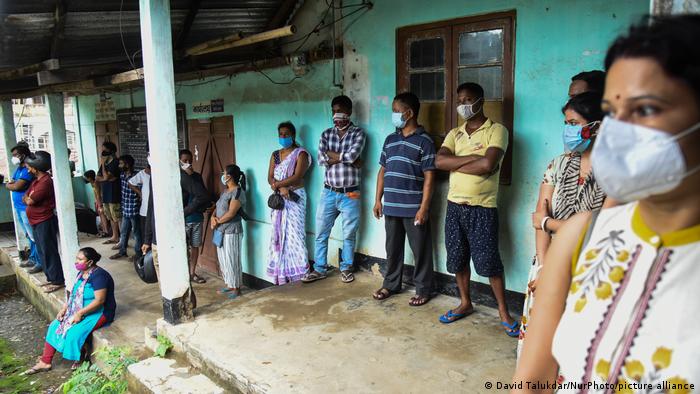 The discovery of fake vaccination camps in cities like Mumbai and Kolkata has shocked India, with authorities vowing to take firm action against unauthorized inoculations.

Media reports say that thousands of people, desperate to get a COVID vaccine, have fallen prey to the scam.

In one such case, Debanjan Deb, a 28-year-old man, posed as a civil servant and reportedly inoculated around 2,000 people, including a ruling Bharatiya Janata Party (BJP) lawmaker.

The police found that all vaccine vials — with Covishield and Covaxin labels on them — were fake and contained Amikacin, an antibiotic medication used to cure several bacterial infections.

Six persons have so far been arrested. Deb has also been charged with attempted murder.

"A well-organized syndicate is involved in these fake vaccinations. We have to be on guard from now on," Vishwas Patil, a senior police official, told DW.

The federal government is trying to downplay the scandal, claiming these cases were isolated "aberrations."

"We have vaccinated over 330 million people. Such cases [of fake vaccinations] can be easily spotted the moment you do not receive a message from the CoWin app. We are in touch with state authorities that are taking action [against the culprits]," Lav Agarwal, a joint secretary in the Ministry of Health, said on Tuesday.

The government of the eastern state of West Bengal has suspended all vaccination centers other than those in private and government hospitals. The state health department has decided to review the guidelines for vaccination camps.

"People are shaken by these incidents. We need to restart these camps carefully and with more precautions. We will tell people to be more vigilant," a health official in Kolkata told DW on condition of anonymity.

Experts say that a sluggish rollout of vaccines and a painfully long procedure to book a vaccination appointment on the government-run app have made many people frustrated. Criminal elements see it as an opportunity to make money.

"Uneven vaccination prices are also creating a divide in society. People are clearly in a rush to get their jabs. Authorities need to act firmly to prevent such cases in the future," Shally Awasthi, a pediatric pulmonologist at King George's Medical University in Lucknow, told DW.

"It is not surprising that many Indians are falling prey to vaccine fraud. Even people belonging to the middle-class are panicking," Vineeta Bal, a scientist at the National Institute of Immunology, told DW.

According to McAfee, a computer software company, India and Chile are the top two countries in the world that have been targeted by fake apps to lure people with a promise of vaccines.

"With most of the world still anxious about COVID and getting vaccinated, cybercriminals are targeting these fears with bogus apps, text messages, and social media invitations. Malware and malicious links hidden inside these fakes display ads try to steal banking information and credentials," the company said in a report in April.

Apart from fake COVID vaccines, counterfeit medicines are available all over the country. According to the United States Trade Representative (USTR), almost 20% of all pharmaceutical products sold in India in 2019 were fake.

A 2015 survey by the Central Drugs Standard Control Organization found that 4.5% of all generic drugs in India were either fake or substandard.