Indian police have imposed strict security measures amid protests over a citizenship law discriminating against Muslims that left several dead on Friday. At least thirteen people have died in the ongoing unrest.

Authorities in India imposed a curfew in the southern city of Mangaluru on Friday following an outbreak of deadly violence related to nationwide protests over a new citizenship law.

The internet was also shut down in parts of northern India to curb unrest over the law, which opponents say threatens India's secular democracy and paves the way for a Hindu state.

Security was tightened around mosques in New Delhi, Lucknow and other Muslim-dominated areas amid fears of violent demonstrations following Friday prayers. A ban on assemblies larger than four people was imposed for a third day in the capital and other cities in the states of Assam and Uttar Pradesh.

Thousands of protesters rallied at New Delhi's Jama Masijd mosque despite a large number of officers in attendance. Late on Friday, police used a water cannon to prevent protesters marching toward a monument in Central Delhi that has been a hub for demonstrations. Another protest at the capital's Jamia Millia Islamia University drew some 10,000 people. 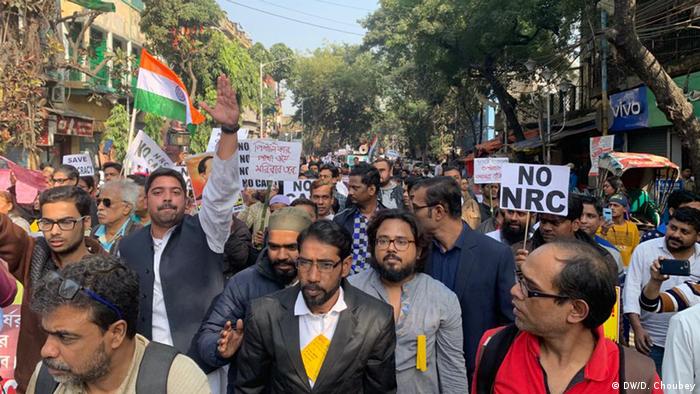 Protests against the law have been taking place for weeks

Violence broke out in several towns in Uttar Pradesh, with police using tear gas and batons to disperse protesters. Six people were killed in clashes in Mangalaru, making Friday the deadliest day of protests thus far.

Friday's deaths have brought the toll from protest-related violence to at least 13. A police spokesman said 20 policemen were also injured in the coastal city in the state of Karnataka.

More than 4,000 people have also been detained in New Delhi by police

Push for a Hindu state?

The law, pushed through parliament last week by the Hindu nationalist government of Prime Minister Narendra Modi,  makes it easier for non-Muslim illegal migrants from the Muslim-majority countries of Bangladesh, Pakistan and Afghanistan to acquire Indian citizenship.

Although many see the law as discriminating against Muslims and as undermining India's constitution by awarding citizenship based on religion, others, even from Modi's own Bharatiya Janata Party, fear it could encourage immigration to the country. Assam, a northeastern state bordering Bangladesh, has seen some of the most violent protests, with residents angered at the perceived support of immigrants, regardless of their religion.

Assam is also where authorities have demanded that 2 million people excluded from an official list of citizens prove their citizenship or be considered foreign. Tens of thousands of people are expected to be deemed to have entered India illegally under the process, which critics say is a plot to deport Muslims.

Muslims, who make up 14% of India's population, have also been unsettled over other measures taken by Modi's government, including a crackdown in Muslim-majority Kashmir.

Modi has defended the law as a humanitarian gesture.

Indian Prime Minister Narendra Modi has refused to give in to the demands of tens of thousands of protesters opposing a controversial citizenship law. The country's top court refused to stall the law's implementation. (18.12.2019)