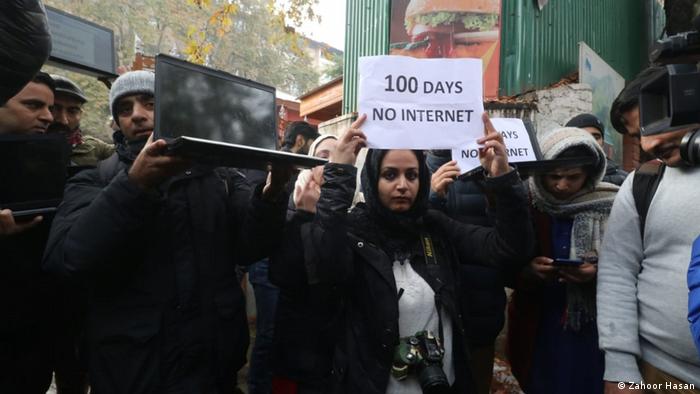 Indian journalists protest the blocking of the internet in Kashmir

For days, tens of thousands of Indians have taken to the streets to protest a new citizenship bill that would disadvantage Muslim applicants. The government has blocked the internet to quell the protests. One of the country's largest telecom companies reports blocking mobile phone services in some areas of New Delhi on government orders.

Under Prime Minister Narendra Modi, India's Hindu-nationalist government has increasingly shut down the internet. According to surveys conducted by the internet organization Access Now, India is the country with the most frequent internet shutdowns worldwide. And those forced outages come with a price tag. According to a report published by the think tank Indian Council for Research on International Economic Relations, about 16,315 hours of internet shutdown from 2012 through 2017 cost India's economy over $3 billion (€2.7 billion).

In some countries, internet shutdowns are used as either preventive or reactive measures to limit public unrest.

In mid-November, Iran's government shut down the internet as a reaction to ongoing nationwide protests triggered by President Hassan Rouhani's fuel policy. Tehran had no connectivity for 10 days, in some regions of unrest even for up to two weeks. 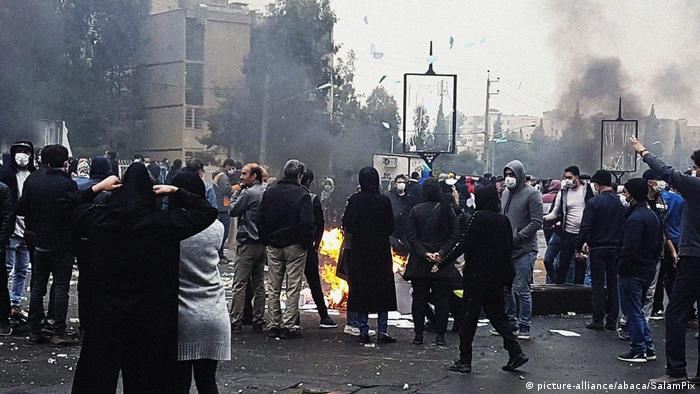 Iranian protesters during a demonstration against an increase in gasoline prices

Media outlets and human rights organizations were also massively affected by the shutdown. Therefore, the exact extent of the violence during the protests continues to be unclear.

Many governments in Africa shut down the internet before or after elections or during large-scale demonstrations. Routinely, government authorities in countries like Rwanda, Uganda, Chad or Cameroon censor disagreeable content on the internet. Unlike China, which is considered the world leader in internet censorship, no African country had the technical means to monitor the entire internet, said Mai Truong, a network expert at the US government-funded nongovernmental organization Freedom House: "In sub-Saharan Africa we see that the authorities often direct the internet service providers, ISPs, to block a blacklist of URLs," Truong added. Increasingly, governments are also trying to make the use of online services and social media more difficult generally — Uganda, for example, introduced a social media tax in 2018. Protests against a social media tax in Uganda

In China, shutdowns are not necessary — given that the government exerts massive control over the internet. For example, prior to the 30th anniversary of the Tiananmen Square massacre, Chinese authorities blocked the entire Wikipedia online encyclopedia. Search engines such as Google and social media networks like Facebook, Twitter, YouTube and WhatsApp are blocked, as well. Especially during the run-up to important political events authorities also crack down on protected VPN connections.

Some other governments in Asia have their own restrictions on the internet. The rulers of Myanmar, for example, openly admitted in June 2019 that they had blocked internet access in two states which had seen violent conflicts for decades. It was stated that everything would be back to normal as soon as "stability was restored."

Russia follows China's example and relies on central control of data traffic. A law in force since November stipulates the setup of a "sovereign" internet independent of foreign servers. Internet providers must make sure that data traffic can be controlled by central authorities — namely the domestic intelligence service and the Federal Service for Supervision of Communications, Information Technology and Mass Media, which has repeatedly been accused of arbitrarily blocking internet content.