India: Community health workers bear brunt of COVID efforts | Asia | An in-depth look at news from across the continent | DW | 21.01.2022

Women who work in pandemic care services often work long hours for low wages. Their labor has bolstered the health care system and helped increase the rate of vaccination. 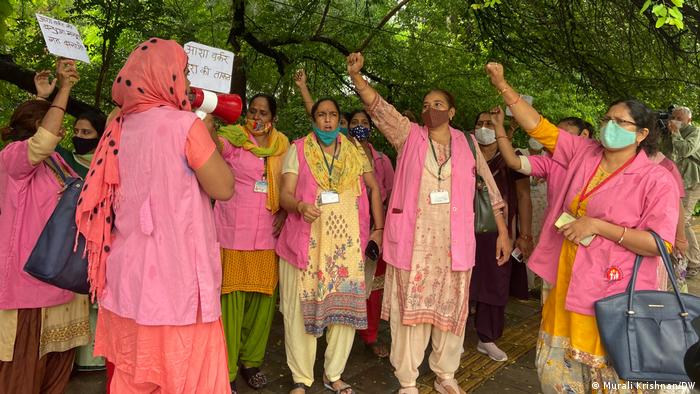 Suman Belhara, 47, an accredited social health activist (ASHA) in Delhi's congested Neb Sarai area, was offering instructions to a man who had tested positive for COVID-19.

"Please quarantine for a week and avoid contact with others. Take these tablets if the fever goes up, drink fluids, and I will come back in a couple of days to check on you," Belhara told the patient.

Belhara is one of the million-strong female social health activists who have formed the core of India's community health care in recent years. Such workers often risk theiq12r own health and safety to assist others, carrying out long working hours for low wages.

It was nearing the end of shift for Belhara, whose area covers more than 450 households. She has gone to 25 different houses in the last nine hours, conducting surveys and checking for coronavirus symptoms.

She and several other women have worked throughout the pandemic to offer health care services and information in rural communities and urban slums. 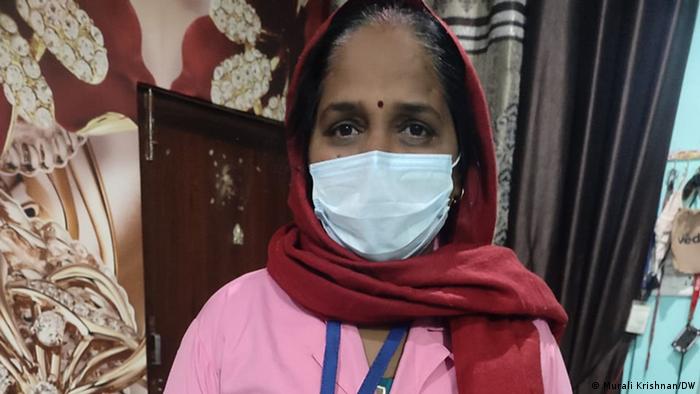 "I have no fixed hours. Sometimes, work spills over until well past nightfall. We work relentlessly," Belhara, a mother of two, told DW.

"In April, it will be two years since I started doing this work, tracing and testing people with COVID symptoms in their communities and providing the first response," Belhara said.

"When we ASHA workers started off, there was no formal or elaborate training," she added. "There was just a briefing at a local hospital, where I was given instructions on how to conduct surveys, take notes and create awareness around the virus."

Women such as Belhara have risked their own personal safety to go door to door for several months, trying to persuade people to get COVID-19 vaccines in some of India's most remote corners, as well as crowded urban slums.

"We did not have adequate health safeguards and protective gear to start off with, and this made us vulnerable to the virus. I contracted COVID in June, and it was awful. Two months later, my brother-in-law died during the second wave," she said.

Because of the duties spurred by the pandemic, ASHA workers across India have been putting in up to 14 hours a day, as well as on weekends.

Broken promises made to ASHAs

Authorities in several states had assured them earlier that they would have improved wages, but did not keep those promises. ASHA workers called a national strike in September of last year in response.

Over the past year, there have been sporadic protests in several parts of the country as ASHA workers demanded more pay and the working status of government employees.

For instance, the government pays them $4 for every institutional delivery that they facilitate in rural India, and $1.50 for the full immunization of a child younger than 1 year old.

In the central state of Chhattisgarh, Rekha Sahu, 36, has often had to wade through rough waters, trek rugged terrain and walk for kilometers to reach villages in the district of Sukma.

On average, Sahu covers a 40-kilometer (25-mile) distance, partly by public buses and partly on foot. A married mother of two children, Sahu lives in Gumma village where, since 2010, she has worked with 11 others to serve about 80 families in the area.

"It was extremely difficult to convince people to take the vaccine. Though every panchayat (village council) set up vaccination centers, convincing villagers was a real task," Sahu told DW.

"Hesitancy and misconceptions are common among villagers, particularly women," she said. 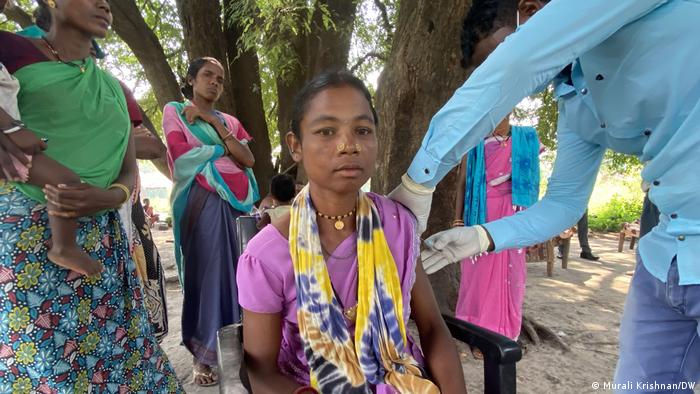 ASHA workers have been instrumental in furthering India's vaccination campaign

In Chhattisgarh, these female health workers are referred to by their colloquial name: mitanin. Door-to-door campaigns and the work carried out by mitanins have helped ward off rumors and get villagers inoculated.

On some occasions, medical teams were chased away when they tried to approach locals, and women fled to forests.

"I was lucky, but my colleagues in other districts were abused and sometimes pelted with stones during their COVID-19 surveys last year," Sahu said.

Sahu added that some standard services that the organization provides, such as family planning, have taken a backseat during the pandemic.

This includes sharing information with mothers on the newest contraceptives and educating women on healthy timing and spacing of pregnancies.

Sahu said her personal journey as an ASHA worker began with a strong desire to have a positive impact on her community — especially for rural women in her state who have limited access to medical facilities.

UNICEF, which has provided training to many front-line workers across India, has also acknowledged the importance of ASHA workers.

"The training has ensured that the lifesaving work continues for the most vulnerable mothers, pregnant women and tribal community members, even under the most difficult circumstances," Yasumasa Kimura, UNICEF's India representative, told DW.