India: COVID outbreaks among medics threaten to derail health system | Asia | An in-depth look at news from across the continent | DW | 11.01.2022

Hospitals throughout major Indian cities are bracing for the worst as a third wave looms, and scores of doctors and nurses are now infected with the coronavirus. 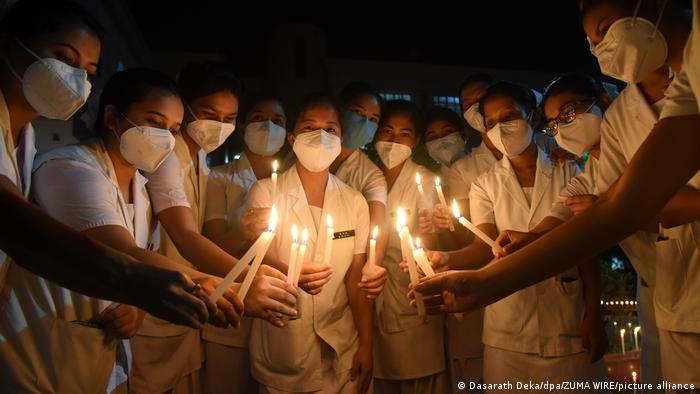 "I am so relieved that I got my booster shot on Monday. At least I can move around with some courage and confidence to ensure patients get medical care," Balhara told DW, adding that many of the 6,500 ASHA workers in the capital are currently infected with the coronavirus.

Rahul Sharma, a resident doctor at the All India Institute of Medical Sciences in New Delhi, was not so lucky.

"I tested positive. Though the symptoms were mild, I had to isolate myself for a week and could not attend duties," Sharma told DW.

Many health care workers will not be able to take booster shots immediately due to recent COVID-19 infections, he warned.

Vikas Bajpai, a public health physician, said the Indian government "should have prepared for this much earlier, given the transmissibility of the omicron variant."

"This is a big setback to the health system, which is already underserved and stretched," he told DW.

India has seen an exponential rise in coronavirus cases over the past week, recording over 100,000 cases daily.

Infection among health care workers has been particularly high in cities, increasing the burden on existing medics who have to work overtime. Hospitals have also been forced to curtail routine clinics and surgeries.

Health authorities warn that while a steady number of medics has been testing positive for a while, they began seeing a higher number of infections in the last week of December.

"Frontline workers are bound to have more infections as we are in the middle of a wave driven by a highly transmissible variant," Shashank Joshi, a member of India's COVID-19 task force, told reporters last week, referring to the omicron variant.

"It is important for hospitals to wait for a negative RT-PCR test before calling the doctors back on duty."

"We are actually working at half our strength. It's a tough time for us because the total number of staff in quarantine is nearly 250," a senior doctor in New Delhi told DW, requesting anonymity.

In Mumbai, major hospitals like King Edward Memorial, Lokmanya Tilak Medical Hospital and St. George's Hospital are reporting staff shortages between 5% and 30%, with growing number of doctors and nurses infected with the virus.

The Maharashtra Association of Resident Doctors on Sunday reported that over 300 resident doctors had tested positive for COVID-19 in the state so far.

How is India responding to the omicron threat? DW's Nimisha Jaiswal reports

In the southern state of Tamil Nadu, major public hospitals in Chennai are bracing themselves as COVID-19 clusters are reported among medical staff.

Earlier this month, 25 doctors at Kilpauk Medical College tested positive for the virus.

In the city of Vellore, the Christian Medical College Hospital stopped the admission of patients except in emergency cases after 200 doctors and staff members tested positive for COVID-19.

In response to the surge, the Tamil Nadu government has issued new guidelines for the treatment of COVID-19 patients. Those who can be treated in home isolation are discouraged from visiting major health centers to save hospital resources for severe cases.

In the northern state of Uttar Pradesh, Shally Awasthi, a paediatric pulmonologist at Lucknow's King George's Medical University, says the workload is "manageable" at the moment due to the shorter isolation period and less severity of the infections.

"However, the situation may become difficult as hospitalizations increase," Awasthi told DW.

Health experts warn that the impending third wave would take a heavy toll on the country's already overworked health system.

India has approximately 17 active health workers (which includes doctors, nurses and midwives) per 10,000 people, according to the Indian Institute of Public Health and the World Health Organization (WHO).

In addition, the distribution is unequally concentrated in urban centers. Only about 40% of health care providers work in rural areas, where more than 75% of India's population live.

Bihar, one of the nation's poorest states, has only 0.24 beds per 1,000 people — less than one-tenth of the global average.

Though some public health specialists have said that the looming third wave will be less devastating than last year's delta variant-triggered wave, hospitals nationwide have taken extra measures to accommodate the increasing number of COVID patients and are recruiting additional health workers.

Health authorities have reserved more than 700,000 hospital beds and boosted oxygen supplies as part of the preparations.

Health care federations have also recommended to the government that final year nursing and medical students be roped in for COVID duty.

Since the pandemic hit India in 2020, 1,492 doctors have died, with 270 doctors succumbing to the coronavirus during the second wave in April-May last year.

"It [shortage of doctors ] is a matter of concern, and we are addressing this problem using all available resources," the Indian Medical Association national president J A Jayalal told DW.

Doctors have spoken out against an alarming trend of using unapproved medications to treat coronavirus infections. The comments come after a yoga guru promoted an unapproved treatment and denounced modern medicine.