In Spain, a shared refrigerator and a crusade against food waste | Environment | All topics from climate change to conservation | DW | 18.09.2015

In Spain, a shared refrigerator and a crusade against food waste

Restaurants and households in Spain are teaming up to not waste leftovers, using a "solidarity fridge" shared by an entire city. It reflects the region's special relationship with food - and seems to be catching on. 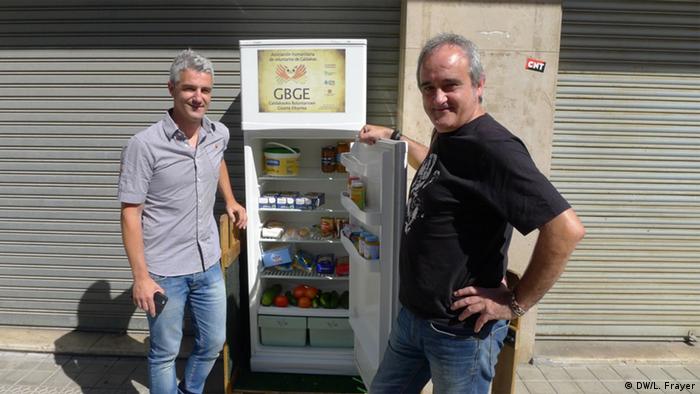 It's lunchtime at Restaurante Berrio, a traditional Basque eatery nestled in green hills just outside the northern Spanish city of Bilbao. Head cook Itziar Eguileor has just realized she's boiled too many artichokes.

"Anything left over used to go straight into the garbage," she says, shaking her head and gesturing toward a dumpster just outside the kitchen's back door. "We have several big containers out back."

Eguileor says she used to feel horrible about throwing away kilos and kilos of perfectly edible food - leftovers - after every busy lunch shift. She spent time on the phone with charities and nursing homes, hoping they'd take the restaurant's leftovers - but with no luck.

"Most of them all said they have their own cooks, and wouldn't accept any of our food," she said. "I've got a job, so I'm lucky to be able to pay my mortgage. But there are people struggling, who could use this food."

But today, leftovers from this restaurant - and many others nearby - are not going into the trash. Instead, they're destined for Spain's first communal refrigerator - a pioneering project to share excess food and cut down on waste. 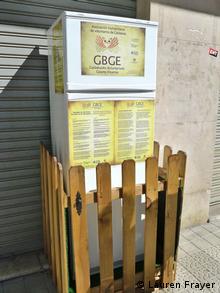 Deliveries like Eguileor's arrive several times a day at the solidarity fridge. It's a standard-sized refrigerator, like those in most homes. It sits on a city sidewalk in the Basque town of Galdakao, population 30,000.

Behind its tidy little fence, the fridge's power cord stretches across the sidewalk and into a public community center beyond. Anyone can deposit food, or help themselves.

"It depends on the day, but we usually bring over six to eight big Tupperware containers filled with food, every day," says Eguileor, as she unloads groceries. "The only thing we don't bring over is desserts, because they're never left over!"

Even if Spain's economy is slowly dragging itself out of recession, the crisis has had a lingering impact on people's values. That includes a push for frugality - specifically when it comes to food waste.

Supermarkets, restaurants and households get rid of hundreds of kilos of leftover food and expired groceries every single day. That's tough to stomach for many, in a country where many are still struggling to put food on their tables.

And so the solidarity fridge began its crusade against leftovers.

The project is the brainchild of Alvaro Saiz, who used to run a food bank for the poor in Galdakao, where he was born.

"The idea for a solidarity fridge started with the economic crisis - these images of people searching dumpsters for food - the indignity of it!" said Saiz. "That's what got me thinking about how much food we waste."

And then he started thinking about how to cut down on that food waste. Saiz says he was inspired by an effort he learned about in Germany where they use the Internet to advertise leftover food for others to claim. 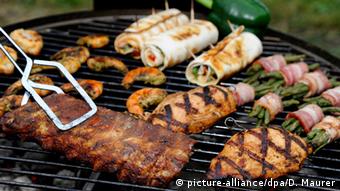 After weekend barbecues, the solidarity fridge is stocked with ribs and sausage

But he says he wanted to do something different in his hometown - something more low-tech - set up a system that would be useful even to his elderly neighbors, who aren't on the Internet. So he came up with the idea of a shared communal refrigerator. Last April, Saiz pitched his idea to the mayor of Galdakao.

"When he came to city hall with this idea, I thought: crazy and brilliant! How could I say no?" exclaimed Mayor Ibon Uribe.

The city approved a small budget of 5,000 euros immediately, to pay for the fridge and an initial health safety study, as well as electricity and upkeep. "And we granted this fridge a special independent legal status - so that the city can't be sued if someone gets sick," Uribe explained.

There are rules: No raw meat, fish or eggs. Homemade food must be labeled with the date, and thrown out after four days. Members of Galdakao's volunteer association take turns cleaning out the fridge.

But otherwise, it operates largely on the honor system, and so far there's been no abuse. In fact, food rarely ends up staying a whole day - much less four.

"Restaurants drop off their leftover tapas at night - and they're gone by the next morning!" said Javier Goikoetxea, a consultant who works on social impact projects, and a member of the volunteer association that cleans out the fridge. "We even have grannies who cook especially for this fridge," he added. 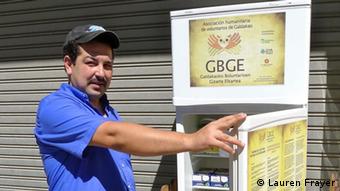 Those facing tough times are grateful for the solidarity fridge

Sure enough, on the day this reporter visited, the solidarity fridge was filled with fresh vegetables - tomatoes, cucumbers and zucchini - from a local communal garden, along with milk and jars of lentils and baby food. There were also pintxos - local Basque tapas - wrapped in plastic and labeled with the date, from a local bar.

When one neighbor, an unemployed Moroccan immigrant, happened to stop by and poked his head into the fridge, his face lit up when he spotted the pintxos.

"Sincerely, it's so nice, when money is tight, to be able to come here and open this fridge and find really good food - bread, tomatoes, vegetables, meat - it's amazing!" exclaimed Issam Massaoudi with a grin.

He's one of the many clients who stop by the fridge almost daily, to supplement what they're able to buy on unemployment benefits or meager wages.

Under the cover of darkness

But the beauty of the project, organizers say, is that no one knows how many people use it. Shame of poverty forces some people to visit the fridge at night, under the cover of darkness.

The solidarity fridge may be a legacy of Spain's economic crisis, during which frugality became a necessity. But in Galdakao, the unemployment rate is about 13 percent - nearly half that of the rest of Spain. The Basque region's welfare state is robust, and few residents go hungry.

But Basque Country does have a special relationship with food, said Galdakao Mayor Uribe. The region is famed for its gastronomy, especially in nearby cities like Bilbao and San Sebastian. 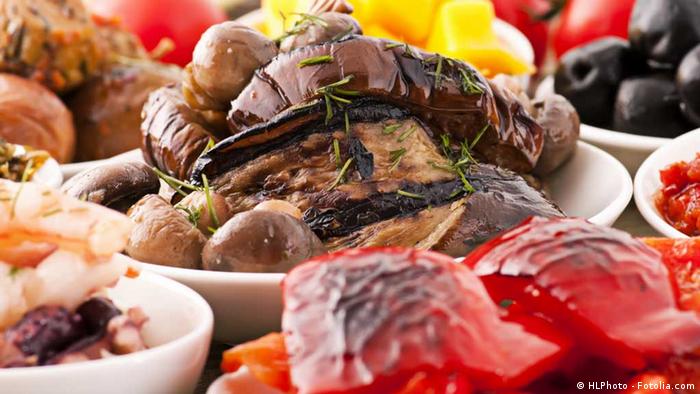 In Basque country, food is sacrosanct

"Here, food is sacrosanct - it's something that's venerated," Uribe said, chuckling. "We have one of the highest concentrations of Michelin-starred restaurants, per capita, in the world," he added.

"So we value eating well, and conserving food - it's part of our culture - and the solidarity fridge is part of that."

That culture seems to be catching on: Another solidarity fridge has since opened in Murcia, a city on Spain's Mediterranean coast. And schools are starting to do field trips to the Galdakao fridge, to teach kids about cutting food waste and sharing.

The way of the trash

A stunning NASA simulation illustrates how trash accumulates in the world’s five ocean garbage patches and shows how even the tiniest particles move along ocean streams. (24.08.2015)

A group of entrepreneurs in Amsterdam cleaned up a polluted shipyard, turning it into an innovative tech playground. They're experimenting with clean technologies and are using human feces as fertilizers. (11.08.2015)

'Food savers' brunch' in Berlin to protest against wastage

Two German charities have held a brunch in Berlin to protest against the high amount of perfectly good food that is thrown away each day. All of the food served at the event had been bound for the dumpster. (05.07.2015)

Germany throws away over 18 million tones of food every year - that's 313 kilograms per second, according to a study by the WWF. Activists have called for an initiative urging consumers to rethink their eating habits. (18.06.2015)

Food for the dump