In Salzburg, 'Everyman' is an investment banker

The 99th Salzburg Festival began with a repeat of the 2017 staging of Hugo von Hofmannsthal's mystery play "Jedermann." In it, Russian actress Valery Cheplanova is decked out as a vamp in a pants suit. 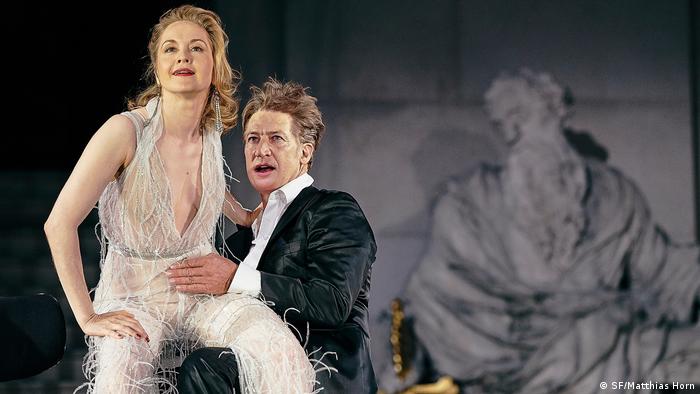 In 2020, the Salzburg Festival will celebrate its 100th anniversary. Some sensations are likely being saved up for next year, so the premiere performance on Saturday evening was a repeat of an already familiar staging from 2017. In it, stage director Michael Sturminger places Hugo von Hofmannsthal's play Jedermann (Everyman) in a modern setting, also shortening and altering the text.

Hugo von Hofmannsthal, Max Reinhardt and Richard Strauss initiated the Salzburg Festival in 1920. Today it is considered the world's most renowned festival of opera, theater and classical music.

Jedermann: A Salzburg regular since 1920

The performance of Jedermann on the square facing the Salzburg Cathedral is the festival's most famous ritual. Unlike previous years, often affected by rain, the premiere actually took place at the appointed location, with a downpour beginning only after the final act.

As in the past two years, Austrian theater and film actor Tobias Moretti is to be seen in the title role (seen at the top with Valery Cheplanova), with his brother Gregor Bloéb playing the double role of Everyman's good friend and the devil. Sturminger's mise-en-scene places the story in the milieu of investment bankers. During a party amidst fashionable bar tables, the central character suffers delusions — precursors of a deadly illness. 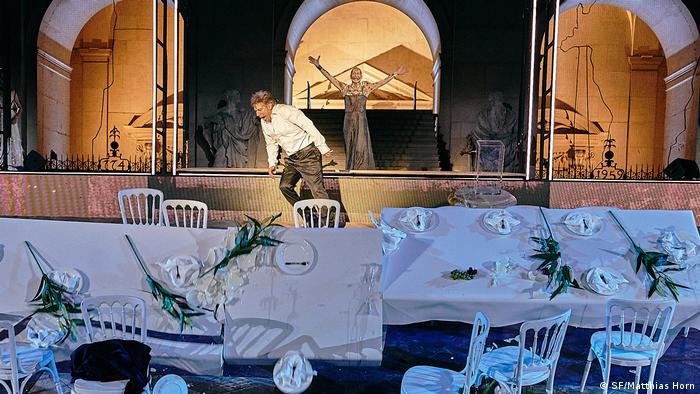 It's about a timeless issue: death, which can strike anyone anytime. The grim reaper is depicted by German actor Peter Lohmeyer, decked out as an androgynous punk figure with body painting and in high heeled shoes.

The character "Buhlschaft" (Beauty) has been recast this year, with Russian actress Valery Cheplanova in the role wearing a risqué, semi-transparent pants suit. As a liberated vamp and with a smoky voice in Roaring Twenties style, she sings a tune for Everyman.

The style of clothing worn by Everyman's lover is a subject of speculation and detailed reporting every year — disproportionately so, as it is a comparatively minor role. 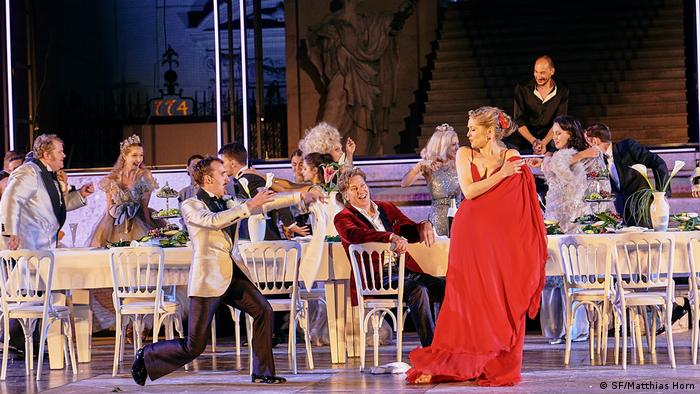 On July 27 Mozart's Idomeneo premieres in Salzburg, staged by the US director Peter Sellars, who is known for his politically-tinged interpretations. The opera about the title character, the king of Crete who has to sacrifice his own son, is musically and scenically extremely turbulent. With a sea monster, two terrible storms and tides destroying everything in their path, it's possible that Sellars' staging may be seen as a commentary on climate change. The performance is under the musical direction of the Greek-Russian conductor Teodor Currentzis.

Altogether, the Salzburg Festival will present nearly 200 performances before it draws to a close on August 31. The playbill includes Luigi Cherubini's seldom-performed opera Médée, the opera Oedipe by the Romanian composer George Enescu, Verdi's Simon Boccanegra and Jacques Offenbach's operetta Orpheus in the Underworld. Held over six weeks, the festival also features new productions of five operas and four plays and more than 250,000 visitors are expected.

The Salzburg Festival kicks off, celebrating both tradition and innovation

With nine new productions, nearly 90 concerts and a host of theatrical performances, this year's Salzburg Festival has plenty to offer culture lovers. Performers on the roster are some of world's best. (20.07.2018)