Culture for hope: The Salzburg Festival

Open-air theater with an imposing backdrop: the Salzburg Festival shifted into gear on July 19 with the performance of "Jedermann." More superlative performances follow, up to the finale on August 31. 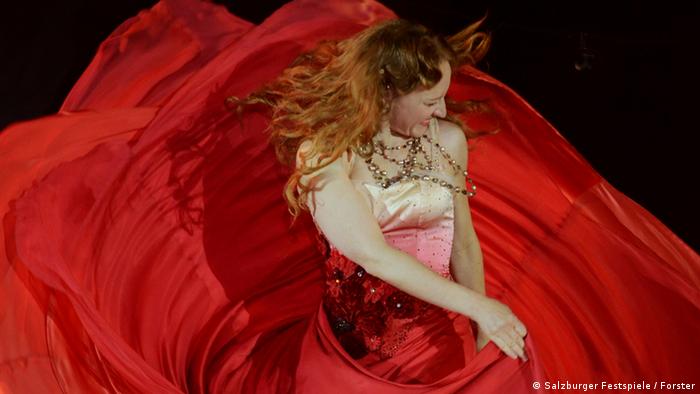 Day 1: The Grand Festspielhaus, its spacious interior adorned only by simple wooden paneling, is filled to the last seat. Elemental sounds pour forth from the stage, portraying nothing less than the origin of the world. Joseph Haydn's oratorio "The Creation" with conductor Bernhard Haitink, the Bavarian Radio Chorus and Symphony Orchestra, and three star vocal soloists is a fitting downbeat to a festival within a festival: the Ouvertüre spirituelle (Spiritual Overture) is music with sacred content that serves as a week-long prelude to the festival proper.

Day 2: The festival audience adores ritual - the motorcade to the Festspielhaus with 20 black Audis and a stretch limousine, a procession with music and bizarre masked characters through the narrow alleys down to the cathedral square, outdoor theater on a mild, clear summer evening with the cathedral and the fortress looming high above. 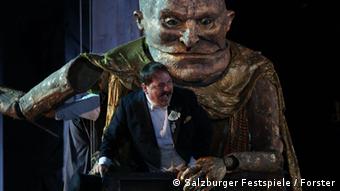 Colorful and opulent: the current staging of "Everyman"

In the staging by directors Brian Mertes from the United States and Julian Crouch from Great Britain, Hugo von Hoffmansthal's most popular work is colorful and naive, even bordering on kitsch - and moving. The medieval mystery play centers on a wealthy man who, shortly before his death, learns the error of his ways. He's accumulated riches, but ignores the plight of his fellow humans. The moral may give reason to pause for audience members who can afford the triple-digit cost of a ticket.

"Jedermann" (Everyman) continues to be performed during the Salzburg Festival's Ouvertüre spirituelle week, established by festival director Alexander Pereira three years ago. This time, central works in the occidental repertory are performed in conjunction with music of Sufi and other Islamic traditions. The spiritual music week will remain when Pereira moves on at the end of the season.

Ambitious if not audacious, he presented opera exclusively in new productions (five this year), and expanded the playbill to 270 events. The result: budgetary straits despite record income from corporate sponsors. The number of attendees also set a record, but the proportion of available tickets sold dropped from 95 to 90 percent. 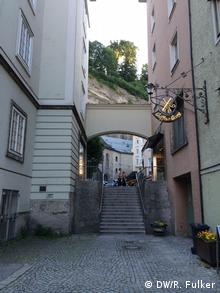 In 2015, the Salzburg Festival will be a bit smaller. A crisis in classical music? Not in Austria, where music and culture are big business: local, regional and national arts subsidies add up to approximately 2.5 billion euros ($3.4 billion) yearly, about double the amount spent per capita in Germany. In general, festivals are booming everywhere in Europe, with about 100 music and theater festivals in all genres in Austria alone. German neighbors to the north can choose from over 500, almost quadruple the number 20 years ago.

Why, then, go to Salzburg? Seeing and being seen along with the creme de la creme are certainly part of it - be it in the charming, narrow Getreidegasse with its little shops or on the "street that stands for the world" along the grand and small festival theaters in front of the vertical granite mountain with the Salzburg Fortress atop.

Then there's the music - Salzburg stands for quality assured. There is hardly a musician of world status whose curriculum vitae is not adorned by the phrase "performed at the Salzburg Festival." Such was the case on the afternoon of day 2, when the sumptuous sounds of Claudio Monteverdi's St. Mary Vesper filled the cathedral.

Led by Sir John Eliot Gardiner, individual members of the Monteverdi Choir and the English Baroque Soloists repeatedly switched location from the altar space to the balconies, generating an intoxicating surround sound. 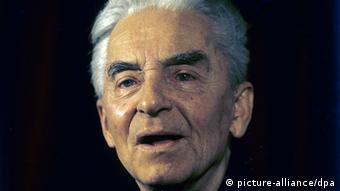 Herbert von Karajan, who died 25 years ago, pulled the strings in Salzburg for decades

When the Salzburg Festival was initiated in 1920, culture was to serve as a mediator of peace and give hope to a war-weary people. But six years earlier, the three founders - author Hugo von Hofmannsthal, director Max Reinhardt and composer Richard Strauss - had taken a different point of view.

Reinhardt signed a nationalistc proclamation titled "Appeal to the World of Culture." To Hofmannsthal, World War I bore the potential for "creative restoration." And in 1914, Strauss wrote: "One has the uplifting consciousness that this country and people are only at the beginning of a grand development and that they absolutely must and will attain hegemony over Europe."

Disillusionment and the ravages of war and inflation were the ambience of the festival in its premiere year. The stage for "Jedermann" was cobbled together from boards salvaged from a torn-down prisoner of war camp near Salzburg.

In this context, Hofmannsthal's "Jedermann," centering on the issues of life's transitory nature and eternity, must have struck a deep chord. No less so among the audience of 2014, with Europe's beautiful, peaceful backdrop amidst a world of wars and crises.

Other performances of the season also recall the beginning of the World War I 100 years ago, including Karl Kraus' world war epic Die letzten Tage der Menschheit (The Final Days of Humanity), a theater play long considered impossible to perform. 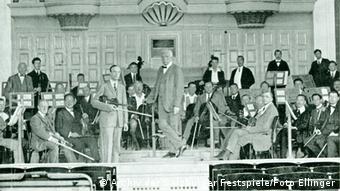 Festival founder Richard Strauss, 150 years after his birth, will be commemorated with a production of his opera Der Rosenkavalier and by Lieder recitals, chamber music and symphonic concerts.

All of Beethoven's piano sonatas and the complete cycle of symphonies by Anton Bruckner also grace the playbill. And a more than notable sideline is a set of youth-oriented events, including children's operas and opera camps where young people can participate in a stage production.

That should give hope - at least to the world of classical music.

270 events ranging from operas and concerts to plays are planned in Mozart's city of birth. As of July 18, the classical music fest is underway, featuring special programming related to Richard Strauss' 150th birthday. (18.07.2014)

At 35, he's already at the top of his field: Andris Nelsons, the designated music director of the Boston Symphony Orchestra, is shaping the group's famous Tanglewood summer fest. But he has no plans to stop there. (17.07.2014)

The American conductor died on July 13 at his home at Castleton Farms in the US state of Virginia from complications following pneumonia, ending a long career of astonishing achievement. (14.07.2014)