In Poland′s Bialowieza National Park, the woodchips are flying | Europe | News and current affairs from around the continent | DW | 05.08.2017

Logging in Poland's primeval Bialowieza forest has continued under the pretext of pest control. Yet environmentalists suspect other motives. The EU says the UNESCO world heritage site is under threat. 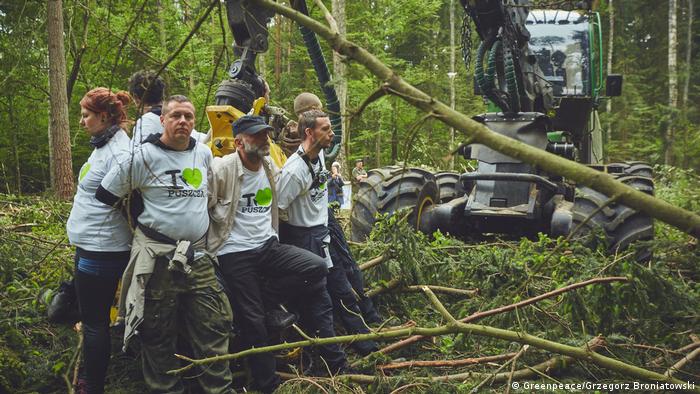 Despite protests, and warnings issued by the European Union, Poland intends to go on felling trees in its Bialowieza National Park, a wilderness treasure protected by UNESCO World Heritage Site status.

Poland's Ministry of the Environment gave the go-ahead for clear-cutting in March 2016, saying it was the only way to control bark beetle infestation. Authorities say that more than half a million trees are infested with the parasites. That was why the ministry changed the forest management plan it drafted with the EU, and which was to be in effect until 2021. The change ushered in a trebling of timber harvesting, raising the total amount to 188,000 cubic meters (6,639,157 cubic feet).

The Bialowieza forest is the oldest forest in Europe. In 2014, UNESCO declared it - together with the portion of the forest that lies in Belarus - the only supranational world heritage site. The total surface area of the UNESCO-protected area is estimated at 140,000 hectares (346,000 acres) - 60,000 in Poland, 80,000 in Belarus. On the Polish side of the border, only 10,500 hectares are closed to human activity.

The only activity allowed in the protected area is scientific research. The remaining forest is under the control of Poland's state forest service. In contrast, Belarus has closed its entire 80,000 hectares of forest to any human activity.

Addressing parliament this June, Poland's minister of environment, Jan Szyszko, said the Bialowieza forest was illegally added to the UNESCO's list of world heritage sites without consultation with locals. Szyszko said the case had been handed over to the country's public prosecutor's office. He also stressed his view that UNESCO environmental regulations, which limit human activity in nature, violate European laws governing forest conservation. Szyszko is calling for the Bialowieza forest to be taken off the UNESCO list. In late July the minister said that deforestation would proceed despite protests.

Szyszko is getting support from "Lasy Panstwowe," Poland's state forest agency. Polish law tasks the agency, which is state-run and operates independently of public administration, with harvesting federal forests according to market principles. The Association of Polish Foresters, municipalities in the region and other social organizations have also called on the government to fight back against "pseudo-environmentalists." Many locals are demanding that the forest be protected against the bark beetle. Forest scientist Janusz Sowa believes that the only way to defeat the parasite is through deforestation. He says it is the only way to save the forest.

'Human activity is changing the forest'

But logging opponents - scientists, environmentalists and representatives of various environmental groups - have arguments as well. First, they say that logging is destroying the forest's natural ecosystem. Further, they claim that the forest is being illegally harvested under the pretext of fighting the bark beetle - there is evidence that healthy trees are being logged. Thirdly, they say that Polish authorities are violating UNESCO world heritage criteria.

Bogdan Jaroszewicz, who heads the University of Warsaw's geobotanical research station at Bialowieza, is convinced that human activity is changing that entire structure of the primeval forest. He points out that deadwood and downed trees in the forest are home to more than 150 rare species of plants and animals. The bark beetle is part of this ecosystem, too, providing food for the unique three-toed woodpecker. "Deforestation destroys the environment that many mushrooms and insects need to survive.

It is also unclear how reforested trees introduced into the area will behave in the future and what kind of illnesses they may be susceptible to," as Jaroszewicz told DW. He claims that the current bark beetle infestation is the result of spruce trees having been planted in a forest that previously had no conifers.

How is the situation in Belarus?

"No trees are being logged in the Belarus portion of the forest," as Vasily Arnolbik, deputy director of the Belovezhskaya Pushcha National Park, told DW. The Belarus scientist stressed that his country protects all 80,000 hectares of its section of the forest. He says that the primeval forest, along with an adjacent 70,000 hectares, make up the whole of the protected Belovezhskaya Pushcha National Park. "Even if we have to do any clearing, we do not touch the primeval forest. The only thing we are allowed to do is remove deadfall from hiking paths," says Arnolbik.

He says he agrees with Polish logging opponents. And adds that another problem is the fact that there is no coordination between Poland and Belarus concerning the entirety of the Bialowieza forest. "We are a whole aren't we?" muses Arnolbik.

The EU wants Poland to be fined over new laws the bloc says undermine the country's judiciary. A Polish minister has called the measures 'acts of aggression'.