DW talks to Lee Sang Yong, the editor-in-chief of Daily NK, a South Korean online newspaper that sheds light on how state-run media in North Korea shape their version of the truth.

DW: How does journalism manifest itself in North Korea? How do people realize they are living in a deception?

Lee Sang Yong: The truth exists even in dictatorial regimes, and North Korea is not an exception. We usually recruit people through a number of activities in China. When North Koreans visit the country, they suddenly find out that the reality there is very different from what they've been told by the official North Korean channels. Obviously, it makes people angry, and they begin to realize the [extent of] abuse of human rights and question the system in their homeland.

How is the real news shared in North Korea?

Intellectuals get to know the news first - sometimes from listening to the radio broadcast to the country, at times from talking to the executives who travel abroad. Those intellectuals create an environment where the news flows, and, eventually, a piece of it leaks to the public.

You could say that journalism in North Korea is the information that people spread mouth-to-mouth. The state-run media only strictly follow the propaganda, and the North Korean population is very perceptive to the verbally distributed news.

People living in North Korea as well as defectors are among your sources. What consequences would they face were they revealed by the regime?

The punishment would be so severe it is hard for me to even find words. They would most probably end up executed for undermining the regime, and up to three generations of their family would be dragged off to a prison camp. Such things happen, but the stories never reach the North Korean population because the regime is very reluctant to make them public. Actions against such individuals are always carried out quietly. People must not know that there are those courageous enough to expose the government and its lies. 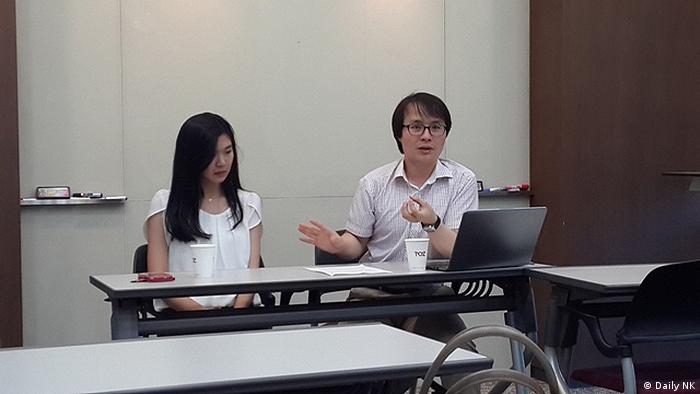 What is the state of the North Korean propaganda machinery today?

Its aim is to look as real as possible. Back in the day, the media used to obscure the origin of the presented news, but now they strive to have all the information backed up. The media has also started to use a lot of extraterritorial information so the people get the impression that they have access to it. Several demonstrations that took place in South Korea were even depicted relatively truthfully by the North Korean channels.

Such an approach has unwanted effects, however: The coverage of the case of [former South Korean President] Park Geun-hye's impeachment was handled in a way to depict Park as a bad leader being punished by the people, while [North Korea's leader] Kim Jong Un was rendered as the good one. But it is a misjudgment to think that North Koreans are so foolish they will submit to the idea that Kim Jong Un is the best leader out there.

They do not, but they must show loyalty on the outside.

And the general public?

Information is a valuable commodity in North Korea, but the volume of information and the number of people who tend to evaluate objectively what is happening in the country is getting bigger. Many North Koreans are aware of the fact that nuclear weapons are not being developed as a means of self-defense and that "US imperialism" is not responsible for the increasing poverty in the country. I always emphasize that the right of the North Koreans to know is an urgent matter.

What factors will play a key role in the future of journalism and propaganda in North Korea?

I think we should pay attention to the "post-marketplace generation." The "Jangmadang generation" or the marketplace generation knows the importance of the market grounds that emerged as an alternative to the nation-wide distribution of goods, a system that collapsed in the 1990s and resulted in a period of famine in North Korea. Born after the mass starvation period, the post-marketplace generation does not believe the state propaganda immediately and often has no feelings for the regime at all. They do their business via the markets, they tend to be individualistic and have IT skills, which open the path to freedom.