Seoul police are investigating how a North Korean defector who fled south ended up back in the North. Appearing tearful in a North Korean television interview, Lim Ji-hyeon told viewers she had escaped a capitalist hell. 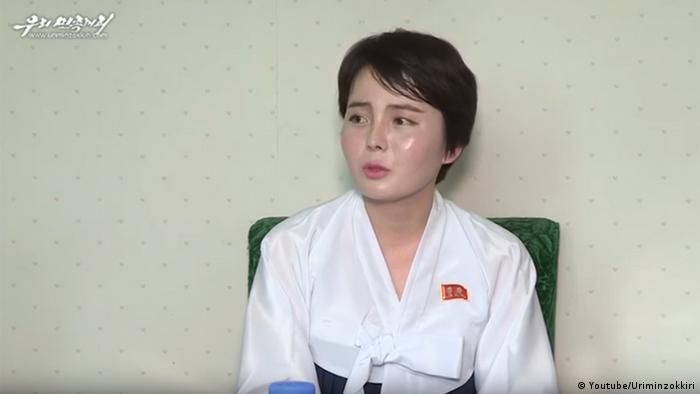 South Korean police on Wednesday said they were investigating the possible abduction of a defector who became a cable television celebrity in her new home, only to end up back in the North.

Seoul Metropolitan Police Agency said the woman, known to South Korean viewers as Lim Ji-hyeon, had traveled to China earlier this year. An agency official said it was investigating whether she had traveled back to North Korea willingly or was abducted.

A woman in her twenties, who police said appeared to be Lim, was featured in a video posted on the North's Uriminzokkiri website on Sunday. In the video, Lim - who described herself as "human trash" - says she "returned home" last month and was now living with her family in the western city of Anju.

Lim, wearing a traditional silk robe and badge featuring images of former leaders, Kim Il-Sung and Kim Jong-Il, told North Korean viewers of her "miserable" life in the south where "money is all that matters."

'Not the place I imagined'

"I went to South Korea harboring this fantasy that I would able to eat and live well there, but the South was not the place I imagined," she said, adding she had hoped to become an actress in Seoul.

"Every single day in the South was like hell. Every night ... I cried thinking about my motherland and my parents in the North," she said.

Lim said she had been forced to appear on South Korean television to make the North appear more miserable than it actually was.

"Everything I said on TV was scripted ... to make North Koreans look barbaric, ignorant and stupid."

Seoul police sources told the "JoongAng" Ilbo daily newspaper there was little sign that Lim had tried to wrap up her life in the South to move elsewhere.

Other defectors have reappeared in the North to be displayed on similar programs, prompting speculation they were kidnapped by Pyongyang or forced to return through threats to their families.

The North has made border security tighter since young leader Kim Jong-Un came to power in 2011, sharply reducing the number of defectors.