Imprisoned Uighur professor′s release shows how Beijing forces loyalty | Asia | An in-depth look at news from across the continent | DW | 21.05.2020

After disappearing for three years into a Xinjiang prison, Uighur professor Iminjan Seydin has been suddenly released. Now, he is denouncing his daughter's search for answers as "anti-China." 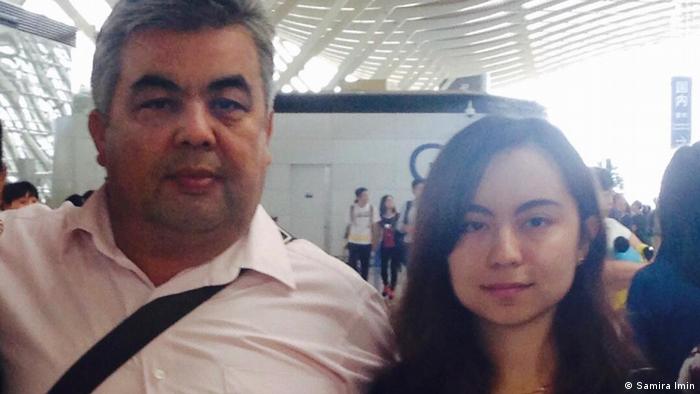 The last time Samira Imin saw her father, Iminjan Seydin, was three years ago before he was shipped off to a work program in China's northwestern Xinjiang region as part of a government "deradicalization program."

Seydin, a former professor of Chinese history at the Xinjiang Islamic Institute, had been sentenced to 15 years in jail for "inciting radical ideologies." Apart from being a history professor for over 30 years, Seydin had also started his own publishing house in 2012, and published more than 50 books on technology, education, psychology and women's issues.

According to Imin, her father wasn't particularly religious and has generally adhered to the Chinese government's guidelines on religious observance.

Working at a hospital in the United States, Imin has been trying to raise awareness about his disappearance through online activism.

Hundreds of Uyghur intellectuals are among the thousands of people who have been imprisoned or put into Xinjiang's re-education camps by the Chinese government over the past three years.

In 2017, Seydin was sent to join a work group organized by Xinjiang's Bureau of Religious Affairs in Hotan prefecture. After returning to the regional capital, Urumqi, in May 2017, the Xinjiang government detained Seydin without informing his family.

Imin said her father was convicted in a secret trial in 2019 for publishing books about Arabic grammar for a colleague at the Xinjiang Islamic Institute. The book has some references to Islam.

"My father was sentenced to 15 years in jail for 'inciting radical ideologies' in February 2019," Imin told DW.

"He has always been an open-minded person who doesn't talk about politics at home. When I learned about his sentence, I was very sad and angry, because I couldn't believe how the Chinese government could treat an innocent citizen like this."

On May 4, Imin was tipped off by friends that her father had appeared in a video published by the Communist Party mouthpiece China Daily. It was the first time she had heard anything from him since he disappeared in 2017.

"I felt like the whole thing was surreal, and I wanted to cry but couldn't really cry," said Imin. "I wasn't sure if I should be happy, because I didn't know what my dad was going to tell me in the video."

When she finally gained the courage to click on the Twitter link, she saw that her dad was a lot skinnier and had a shaved head.

"Of course, I was happy to see that he's still alive, but I was also wondering how he lost so much weight over the past three years," Imin explained. "He had shrunken for at least two sizes and the clothes that he wore in the video was too big for him."

It appeared that her father had been freed from prison. However, his message in the video sounded bizarre.

"Recently some overseas anti-China forces deceived my daughter into claiming that I was under illegal detention," Seydin said in the video. "This is deception and nonsense. I'm very well, healthy and free."

Seydin asked Imin not to trust the "deceptive rumors" and stop spreading false information about "his detention" abroad.

He emphasized that without the party and the government, he would never had been a professor or had a rewarding life, adding Imin also had the party to thank for studying abroad.

"All these things would have been impossible without the care of the party and the government to our family," Seydin said.

"I used to believe you thought the same, and I was heartbroken upon hearing what you said. How could my daughter say something like this? I want to tell you, don't be deceived by overseas anti-China forces again and stop saying those things."

Seydin went on to say that he missed Imin and wanted her to finish her studying in the US so she can return to China. "Our family will be happier," he said.

Read more: China's treatment of Muslim Uighurs in Xinjiang: 'I had the chills'

Is he truly free?

After watching the video, Imin wanted to personally confirm if her father had really been released from prison.

She sent three voice messages to her dad's WeChat account on May 5, but he didn't immediately respond. Then her mother called with a video link and her dad was there.

"During the call, my dad kept repeating how great China and the Chinese Communist Party was," Imin said. "He said if it were not because of them, he would not have such a comfortable life. He told me he didn't want me to be anti-China, because he thought the CCP was treating him well."

When Imin tried to ask him about why he disappeared for three years and why his head was shaved, Seydin claimed that he decided to shave his head and beard because it was too dusty in Hotan.

And when Imin tried to tell her dad that she had been working in the US, he simply told her to finish her studies and returned to Shanghai or Beijing for work.

"He kept reminding me not to engage in activism, and he also wanted me not to listen to anything some 'bad guys' said," Imin explained.

Even though her father had been released from prison, Imin still worries about whether he has been absolutely freed from any form of detention.

She said that since her dad has been released, she wants the Chinese government to drop all charges against him and return all the fines that he had previously paid.

"Since he claimed to have already been freed in the video, I want to always see my dad being healthy and free from now on," Imin said.

This is not the first time that Beijing has tries to discredit overseas Uighurs by releasing video testimonies of their family members in Xinjiang.

Last November, the state-run tabloid Global Times released a four-minute video of interviews with family members of three prominent overseas Uighurs, who not only praised the Chinese government, but also accused their family members abroad of spreading rumors.

According to Peter Irwin, a senior program officer at the Uyghur Human Rights Project, it is clear that Beijing wants to use the video as an open threat to Imin.

"The Chinese government has been asking people in Xinjiang to call their family members abroad and tell them to go back to China," Irwin told DW. "Additionally, China is trying to tie all overseas Uighurs who have been speaking up for their family to groups like the World Uighur Congress and Uighur Human Rights Project."

"They are using these particular cases to threaten other overseas Uighurs to stop speaking up," said Irwin. "This is basically hostage diplomacy, and it’s not just directed at a particular individual. They are sending a message: 'we might release these people, but you need to stop speaking up.'"

The expert added that Beijing's narrative is under pressure by Uighur activists abroad.

"Seydin claimed in the video that his daughter had been deceived by overseas anti-China groups, but in fact, she has been speaking out as an individual. She has no direct ties to any group, and I think that scares the CCP."

"The case proves that international pressure does work to a certain extent," Irwin explained. "Overseas Uyghurs need to believe in the truth they see, and speak up with courage."

"The pressure forces China to change its approach, because they are afraid that their narrative is not strong enough to fight back against all of these people."