The head of the IMF has shifted her position on debt relief for the Mediterranean nation. Germany's finance minister had led the eurozone movement rejecting debt forgiveness for Athens. 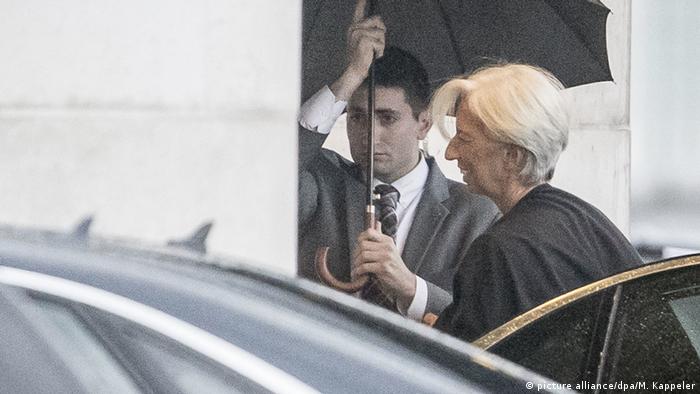 Opinion: The myth of Grexit

Times are getting tougher in Greece, but there is no real danger that an EU country will be left to flounder in election year 2017, writes Georg Matthes.

Lagarde said after the meeting that Greece's debt needed "significant" restructuring but that it did not require debt forgiveness from the Mediterranean nation's creditors, marking an apparent shift of her policy view.

Germany and other eurozone lenders have categorically dismissed the notion of debt forgiveness, previously placing it at loggerheads with the global financial mechanism.

However, Lagarde told German broadcaster ARD that she was "much more confident" of Greece's outlook for resolving the debt crisis.

"What will be needed is not a haircut if the reforms are done, but a significant extension of maturity, a significant interest rate capping, and that will have to be discussed in greater detail later on as progress is made on the reform front," Lagarde said.

"We had asked the authorities to consider two categories of reforms, pensions reforms, income tax reforms," Lagarde said. "Those are the two key areas but there are many others that need to be conducted in order to improve the economic situation of Greece."

While the IMF has not granted Greece loans since 2013, the mechanism's participation is considered crucial by the German federal government and other European lenders.

In 2015, eurozone members approved a massive 86-billion-euro ($91 billion) bailout package, but the IMF did not sign onto the deal, saying it needed more guarantees from Athens.

Ahead of the 2015 bailout package, Athens implemented capital controls after it defaulted on a $1.7-billion payment to the IMF, making it the first developed nation to do so.