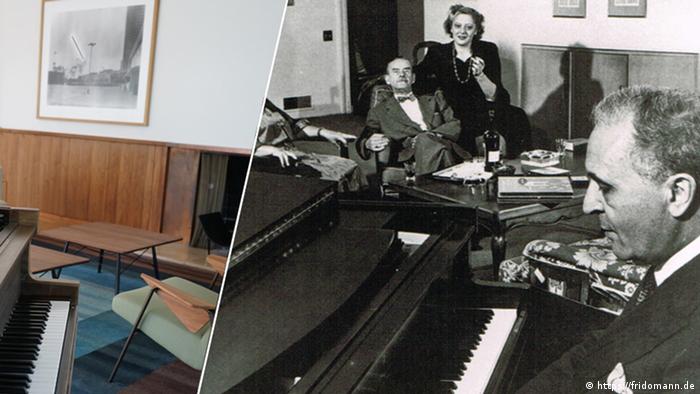 On the left, the restored grand piano; on the right. Bruno Walter plays the piano in 1949. In the background Thomas Mann and his wife Katia.

The grand piano of the Nobel Prize-winning author Thomas Mann has gone on a long journey around the world. Mann gained fame for such novels as Death in Venice and Doctor Faustus. He passed away in 1955 after spending several years of exile in the United States with his family during World War II.

Now, thanks to the author's grandson Frido Mann, the prized instrument has been returned to the family's former home in the Pacific Palisades on the outskirts of Los Angeles. The heirloom instrument will be ceremoniously unveiled with a performance by well-known pianist Igor Leviton October 16. Due to COVID-19, the concert was postponed for a number of months.

Frido Mann, himself a musician, psychologist and author, felt that it was important that this grand piano return to the former home of his grandparents. "I had the grand piano with me for decades, it was part of my everyday musical life," he said in an interview with DW. Ten years ago, he slowly stopped playing the instrument. "I thought, now is exactly the time to take this step."

The white villa where Thomas Mann lived with his family from 1942 to 1952 is now a trans-Atlantic meeting place where up to five fellows from Germany can live and hold debates and discussions about fundamental global issues confronting society.

By donating the grand piano to the home, Frido Mann wanted above all to thank the German government, which had bought his grandfather's house back in 2016, saving it from decay. "But I also wanted to bring a certain lively element of the historical significance of the house back in there," Frido Mann said. 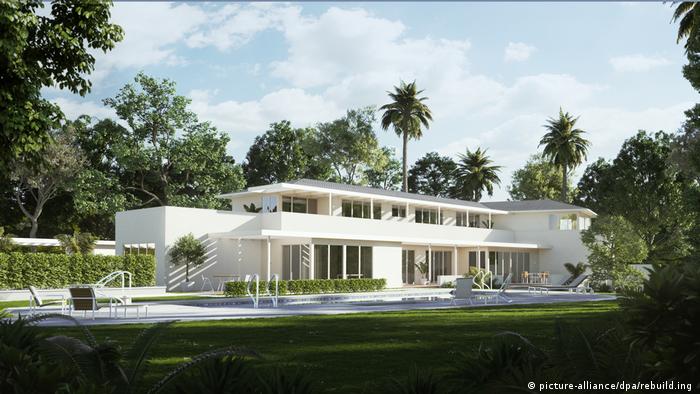 The Thomas Mann House launched its residency program in 2018 and was inaugurated by German President Frank-Walter Steinmeier. During this period, Donald Trump was in power and trans-Atlantic ties were strained. Steinmeier named the family home "The White House of Exile," referring to the White House, where the sitting US president resides. Frido Mann published a book in German, Das Weisse Haus des Exils (The White House of Exile), which tells the story of Thomas Mann's years in exile and his political involvement in Germany.

In the mid-1940s, Thomas Mann invited musicians, artists and intellectuals to his house for chamber concerts. Guests included many prominent exiles from Europe who had fled Hitler's dictatorship. Among those who played on the storied instrument were conductor and pianist Bruno Walter, and the philosopher and musicologist Theodor W. Adorno, who initiated Mann into the rules of Austrian composer Arnold Schoenberg's 12-tone musical system. Physicist Albert Einstein and the writer Lion Feuchtwanger were also guests at the villa.

According to Frido Mann, it took a long time for his grandfather to believe that Hitler would be defeated during World War II. "In Hitler's assassination, he already saw a beginning of the end, and that allowed the family to relax," he says, referring to diary entries by Thomas Mann. "I can imagine that doing something beautiful for a change and immersing himself in beautiful classical music played a role." 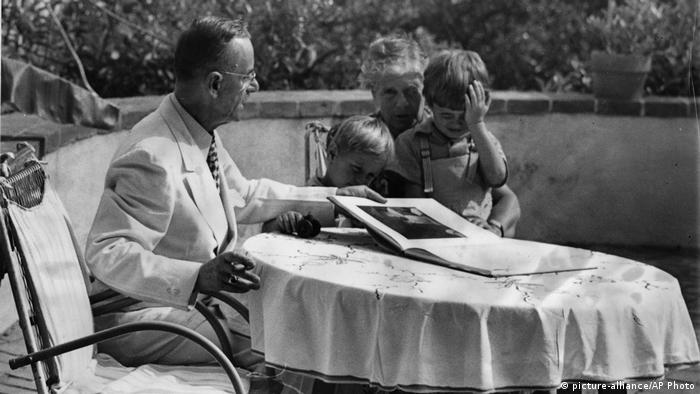 Thomas Mann on the patio of his home in Pacific Palisades in 1941. His wife Katia has her grandson Frido on her lap on the right.

Frido had lived with his grandparents for some time as a child. He remembers lying awake in his bed listening to concerts given in the living room. In 1952, the family left the US and brought the instrument with them to Switzerland. While studying music in Zurich, Frido Mann used the grand piano in his grandparents' house. After the death of his grandmother Katia in 1980, he took the piano to Germany.

For Frido, donating the piano to the California house is a way to honor his grandfather, who had given the piano to his parents shortly before the war.

Frido Mann also likes to call the instrument the "Faustus" grand piano, because Thomas Mann wrote his famous novel Dr. Faustus, during this period. The story tells of a composer, Adrian Leverkühn, who sells his soul to the devil in order to gain fame and glory.

The eighth chapter of the novel describes Beethoven's seminal late work, the Piano Sonata No. 32, opus 111, in detail. In this piece, Beethoven makes the somber key of C minor and the bright key of C major collide in a virtuosic rhythmical work full of contrasts and chant-like melodies. Thomas Mann's book, with its detailed and complex discussions, is in a sense intertwined with the rich composition of Beethoven's piece. For this reason, Frido Mann requested that this Beethoven sonata be played by Igor Levit during the official inauguration at the home.

The Thomas Mann House is managed by an association that also selects the scholarship holders, most of whom hail from the political and social fields. Frido Mann hopes that the grand piano in the house will also allow chamber concerts to take place again, to inspire the selection committee to also give scholarships to musicians. 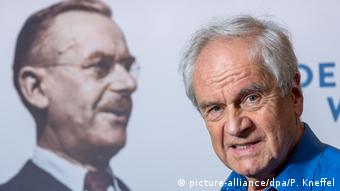 Thomas Mann and Frido Mann: both fighters for democracy

"Music belongs to the house and also to Thomas Mann," says Frido Mann. "My grandfather was not actually an academic. There were hardly any professors, after all, but  rather writers, musicians, film directors or film actors staying with him — that was his world."

Mann hopes there will be many more concerts taking place in the house, such as the one given by pianist Igor Levit on October 16. "I certainly hope very much that the grand piano will be used for music as a form of trans-Atlantic communication. Just as it is now, when a Russian-Jewish pianist who lives in Germany, now inaugurates this grand piano in the USA."