Children's books in Hungary would need to be sold in "closed packaging" if they deal with LGBTQ issues, according to a new decree. The order stems from a law that critics say conflates homosexuality and pedophilia. A new decree in Hungary has ordered children's booksellers to wrap books and media that depict homosexuality in "closed packaging."

The measure, announced on Friday, comes after parliament passed a law forbidding displays of what it termed homosexual content to minors.

The new order also forbids public displays of products that depict or promote a gender that deviates from one's declared gender at birth.

Hungary's right-wing government, led by populist Viktor Orban, has been waging    a wider campaign against the LGBT community, presenting it as a fight for family values and child protection.

The law itself is an umbrella measure to prevent homosexuality in education. The government argues sexual education should be left to parents. 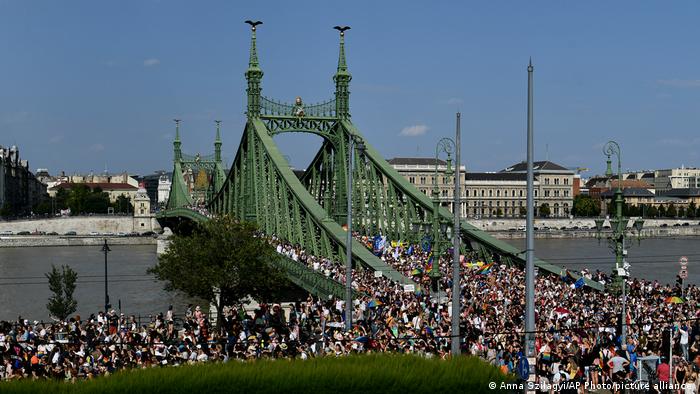 Hungarian society is split over the issue of gay rights, but thousands turned up for the 2021 pride parade in Budapest

While critics charge that the law wrongly conflates homosexuality and pedophilia, the government argues the measures are entirely about protecting children.

To this end, the law forbids the sale of any books or media depicting same-sex relations or gender changes within 200 meters (650 feet) of any school or church. The provision is attached to a law that allows for tougher penalties for pedophilia.

Prime Minister Viktor Orban has been in power since 2010 and faces a possibly challenging election next year. He has grown increasingly radical on social policy and argues Christian values are under attack from Western liberalism.

An Ipsos poll last month showed 46% of Hungarians support same-sex marriage. Thousands turned out last month for Budapest Pride in a show of defiance against the government.

Ursula von der Leyen, the president of the European Commission, has called the law a "disgrace." The European Commission has launched legal action against Hungary, labeling the law discriminatory and arguing that it contravenes the 27-nation bloc's values of tolerance and individual freedom.

Some have compared it to Russia's gay propaganda law of 2013.