In an exclusive interview with DW’s Conflict Zone, Member of the European Parliament, Balazs Hidveghi of the Fidesz party, defended the emergency measures passed by the Hungarian government in the wake of the COVID-19 pandemic. He called the legislation, which suspended parliament for an unspecified time and allows Prime Minister Viktor Orban to rule by decree, similar to measures taken across the European Union.

From the Fidesz party headquarters in Budapest, Hidveghi told DW’s Tim Sebastian the legislation was passed in accordance with the Hungarian constitution, and that: "rule of law works in Hungary very well."

A number of critics have called the move the latest power grab by Orban and his governing Fidesz party yet another effort to restrict democracy in Hungary.

MEP Hidveghi refuted this, saying: "we didn't crack down or anything. We just had to deal with a situation that was extraordinary in every sense of the word."

He also rejected the criticism as unnecessary, saying the Fidesz party already had a two-thirds majority in parliament and said that the country was now nearing the end of the state of emergency anyway. 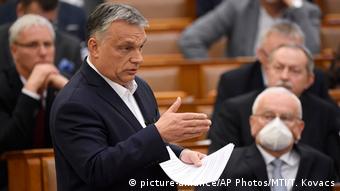 The MEP said controversial provisions in the pandemic legislation allowing prosecution for “spreading misinformation” were necessary.

It could lead to people facing jail time for misinterpreting facts.

Hidveghi justified the measures as necessary, given the unprecedented nature of the virus outbreak.

The MEP said the government needed those measures to protect the public and ensure that "real facts" were transmitted.

Sebastian asked if this is Hungarian-style free speech.

"Very similar things and very similar special orders or special decisions have been made across the European Union," the MEP said.

Hidveghi pointed out governments around the world were considering measures to stop the spread of misinformation: "on social media, all kinds of fake news are transmitted. And authorities across the European Union, or across the whole world, I might say, are trying to find a way to deal with that, so that public order is maintained."

The Hungarian politician said the state of emergency law had been "looked at in detail by the European Commission, which is the guardian of the treaties of the European Union works. And they found that in no way did it go against any democratic norm or European law."

Critics have disputed that point.

Hidveghi dismissed surveys showing most Hungarians did not believe the Orban government had strengthened democracy and press freedom in Hungary.

"The most important survey, of course, is always in a democracy, elections. Parties go for elections. The Fidesz government has been reelected three times," Hidveghi said.

Hidveghi also rejected critics who saw the consolidation of media in the country in recent years as a concerted government effort to eliminate independent journalism.

"Freedom House once was an organization that I respected, I don't think their analysis over the past couple of years have been trustworthy or based on facts,” said Hidveghi, who joined Orban’s Fidesz party in 1989.

He pushed back at reports from the EU’s anti-fraud agency OLAF that placed Hungary among the top countries for fraud with European funds.

"I reject the opinion that there would be more corruption or significantly more corruption in Hungary than in an average situation in the region or in the European Union."

"There is corruption everywhere … in the EU," he added.

The MEP defended the country’s response to allegations brought to light by the EU’s anti-fraud agency, saying:

"Hungary is amongst the best, in fact, performers of the percentage of how many looks, cases are looked into."

Similarly, Hidveghi said allegations Orban had stuffed the courts with party loyalists had led to what he called a "lively debate" in judicial circles, and that Hungary still had a normal functioning of judges in the constitutional court with the "parliament nominating new ones."

He also disputed allegations the government had altered the electoral system to disadvantage opposition parties.

"We have streamlined the electoral system. There was no gerrymandering," he said, pointing to opposition wins in local elections as proof.

Hidveghi ignored Sebastian’s question about a recent decision handed down from the Court of Justice of the European Union on refugees detained at the border with Serbia, insisting:

“There’s no forced detention at Hungary's borders. Those who come and stay in the transit zone can, at any time that they wish, go back and leave from where they came from."

Hidveghi said his government’s policy on restricting access to Hungary for refugees was based on a higher motivation. "Christian responsibility means that you help people, where they are. You take help, where help is needed instead of bringing the problem into the European Union.”

He warned Europe "is unable to deal with hundreds of thousands or millions of migrants coming into this continent. That's not the way forward, the past five years have shown it very clearly."

"That's not the way forward and it's not supported by the European people," he said.

A law that holds a prison sentence of up to five years for spreading "false information" is part of new measures against COVID-19. As Fanny Facsar reports, journalists fear it could make it even harder to report news. (07.04.2020)