Hungary's far-right Jobbik party has secured its first victory with a single candidate. The extremists' attempts to appeal to mainstream voters appear to have borne fruit. Csaba Tibor Toth reports from Budapest. 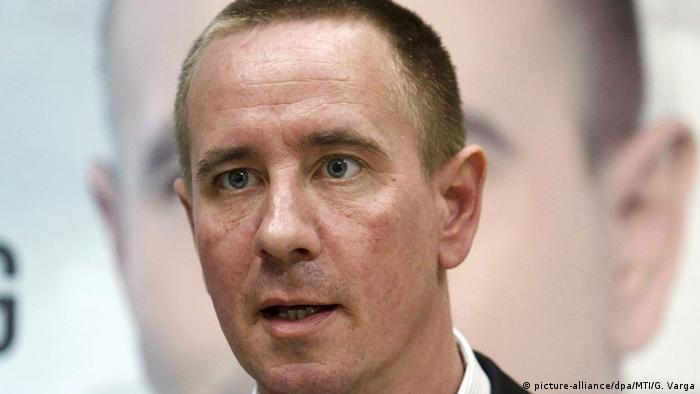 Prime Minister Viktor Orban's Fidesz party conceded defeat to Jobbik candidate Lajos Rig even before the tally was completed in the by-election in the western Hungarian town of Tapolca.

Orban, a conservative, tried to downplay the events in a post on Facebook, using one of his favorite football analogies to calm his supporters:"There are times when the football bounces off the goalpost. I say thanks to [Fidesz candidate] Zoltan Fenyvesi and our activists for their work. They worked hard and it was a nice job."

Orban had campaigned for Fenyvesi in Tapolca the day before the vote, but had apparently already reckoned with a defeat. He ended his speech there on a bitter note, saying it didn't really matter if Fidesz lost, since they hold 65 perfect of the seats in parliament and run the "strongest" governing coalition in Europe. Unlike in the case of gains by leftist opposition, the prime minister was seemingly unwilling to confront Jobbik - or its policies - directly.

It is difficult to overstate the significance of this win for Jobbik, which has received international criticism for its anti-Semitic and anti-Roma rhetoric, political analyst Peter Kreko told DW.

"The party successfully modified its image to a moderate direction in the electorate, with the help of professional politics, PR, and party leader Gabor Vona's centrist shift. As a result the voters do not view Jobbik as radical any more. Even if their local candidate, Rig, does not at all represent this moderate image, his local embeddedness and the party's very active door-to-door campaigning successfully counterbalanced all negative elements."

Kreko thinks the electoral victory renders a Jobbik-government much more likely after the 2018 elections.

"Jobbik is successful in Hungarian politics as it can capitalize on the fact that it has never been in government before," he said. "Hungarians disapprove of the 'old elite' of the 1989 regime change now more than ever. In the case of the left, this happened before 2010, and with Orban the same accusations are damaging the party's approval right now. Yet Jobbik also has had corruption scandals recently," he said, adding that Hungarian media granted them little critical attention. 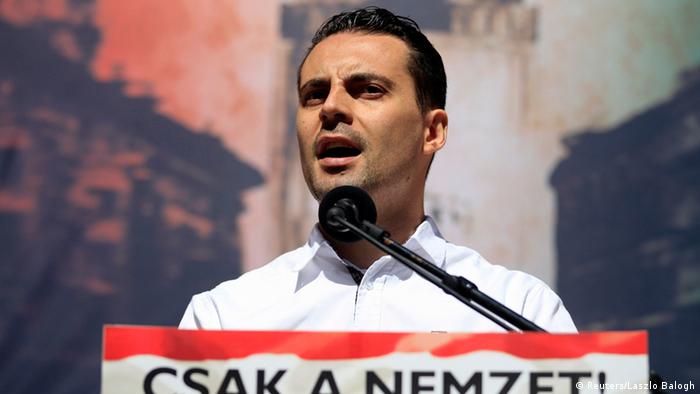 Jobbik is especially dangerous because of the prominence of Russian political interests within the party, which call into question the party's autonomy, Kreko said. While Orban could exploit that diversion from "national interests" to his own advantage, his own relationship to Russian President Vladimir Putin would make such an attack unlikely to succeed.

"Jobbik and its party leadership faces a huge challenge, however, in making itself at least presentable in Europe," Kreko said, pointing out that the reason far-right politicians Geert Wilders of the Netherlands and Marine Le Pen of France did not form a parliamentary group in the European Parliament was that they did not want to cooperate with parties like Jobbik or Greece's Golden Dawn.

Even so, Jobbik party chief Gabor Vona has said he wants to build friendly relations with decision-makers in Germany. It's a project Kreko called highly "difficult but inevitable" if the far-right party intends to ever garner broader approval.

Paramedic-turned-politician Lajos Rig doesn't exactly fit that bill. He is believed to have posted links on Facebookabout the "organized genocide" Jews commit against Hungarians using "murderer Gypsies" as a "biological weapon." Rig opted to hide signs of his radical past and campaigned on a platform calling for better healthcare services for Tapolca and increased security. 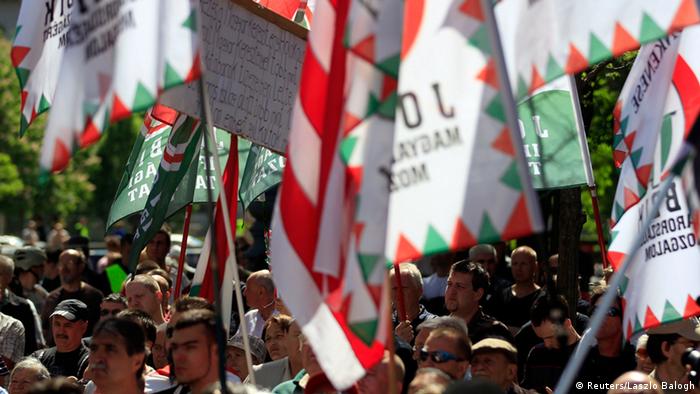 Jobbik is known for its anti-Semitic and anti-Roma rhetoric

Fidesz started a smear campaign focusing on Rig's person in early March, revealing that one of his many tattoos features the infamous motto of the Nazi SS, "Meine Ehre heißt Treue" (My honor is called loyalty), in Gothic script. Although Rig refused to show the tattoo to reporters, he explained that he wears it as a way of honoring his marriage and said it bore reference only to that.

Jobbik, which was founded as an offshoot youth organization of Fidesz in 2003, gained popular support on an anti-Roma and anti-Jewish as well as an anti-establishment political platform during the 2009 to 2013economic crisis. In the following years Jobbik won seats in both the European Parliament and the Hungarian national assembly and gained ground in rural municipalities during the 2014 general election.

As fighting continues in eastern Ukraine, Hungarian Prime Minister Viktor Orban has reinforced his relationship with Moscow and provided Putin with a platform. In doing so he is weakening the EU, says Robert Schwartz. (18.02.2015)

Hungarian Prime Minister Viktor Orban and his Fidesz party have suffered a critical by-election defeat. The result may signal a decline in popularity of the right-wing party that has ruled in a coalition since 2010. (22.02.2015)