Prime Minister Sigmundur David Gunnlaugsson has resigned after public protests following allegations that he hid money offshore. However, hundreds more Icelandic names are thought to be included in the "Panama Papers." 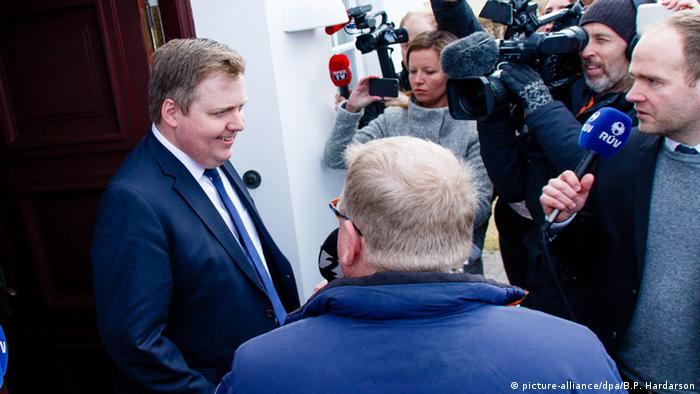 Gunnlaugsson said he was offering his resignation after a request for parliament to be dissolved was denied by President Olafur Ragnar Grimsson.

The move came after Iceland's opposition called for a vote of no confidence in the government, with deep cracks appearing in the ruling coalition itself.

Polls have closed in Iceland for an election expected to return the right to power four years after it lost in the wake of financial catastrophe. The victory would likely end Iceland's negotiations for EU membership. (27.04.2013)

A new report released on Monday points the finger at the former prime minister and banking leaders for the 2008 banking collapse, which plunged the North Atlantic nation of Iceland into an ongoing recession. (12.04.2010)

It also followed record protests outside parliament in Reykjavik on Monday. Police estimated the crowd to have been even larger than in 2009, when protesters bashed cooking utensils together to show their contempt for government officials.

"There's a complete breakdown of trust between the prime minister and his government and the people of the country," Kristjan Guy Burges, general secretary of Icelandic Social Democrats, told DW.

"It was unprecedented yesterday," Burges said. "We had the highest number of protesters in the city center, even after the 'Pots and Pans Revolution' - it was more people."

"People are asking now whether we learned anything from that and whether we are getting the same government that was in power before and it behaves as it did before."

"People were out in the streets because they feel that they have been betrayed - that there are guys running the country who don't want to tell them the truth and who want to live in a different world than the rest of the people."

Leaked documents known as the Panama Papers show that the 41-year-old premier and his wife owned an offshore company that it is alleged he kept secret. The firm had claims totaling 515 million Icelandic kronur ($4.2 million) on Iceland's three failed banks, Lansbanki, Glitnir and Kaupthing. The revelations contained in the Panama Papers leaks concern the company Wintris Inc, which was allegedly established in 2007 by Gunnlaugsson, along with his wife-to-be Anna Sigurlaug Palsdottir.

Interests kept out of sight?

Gunnlaugsson is said to have sold his half of the company to Palsdottir for a token $1 on December 31, 2009 - the day before a new Icelandic law took effect that would have required him to declare the ownership of Wintris as a conflict of interest.

"He was a party to that company, and he didn't declare his interests," said Burges. "I'm not going to say that he blatantly lied, but people were saying that in parliament."

The latest protests saw an estimated 8,000 protesters - about 1 out of every 40 Icelanders - voice their anger at a perceived lack of transparency on the part of Gunnlaugsson and his wife. The widespread perception, in a country that emerged relatively successfully from a major banking crisis, is that the country's political and financial elite are operating under different rules. 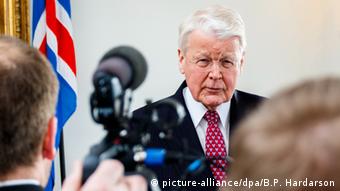 Political scientist Audur Ingolfdottir, who was at the demonstrations, told DW the mood was one of calm defiance.

"It was absolutely crowded but very calm and quiet," said Ingolfdottir, of Iceland's Bifrost University. "There were a lot of people there that are not necessarily politically active; different generations just expressing they were not okay with this - not by screaming and yelling but by a quiet statement of 'We're not okay with this."

The issue is sensitive in Iceland, a country marked by the excesses of the last decade when senior bankers used shell companies in tax havens to conceal their dealings in risky financial products.

Elected prime minister in 2013, Gunnlaugsson had campaigned as a break from the political old guard, which was accused of having turned a blind eye to the banks' reckless investments.

Gunnlaugsson's offshore interests had been the focus of a television interview with the Swedish company SVT and Reykyavik Media in March. When asked about Wintris, the Icelandic premier said he was not prepared to answer and walked out, claiming to have been tricked into the interview under false pretences.

The interview was aired internationally on Sunday - as the Panama Papers were published by the International Consortium of Investigative Journalists (ICIJ). 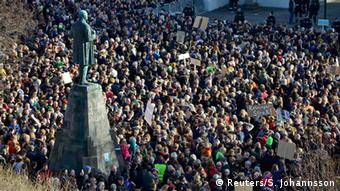 "What really created this wave of protest was the interview the Swedish journalist took with the Prime Minister. It became quite clear that he had been hiding the existence of this company on purpose, and that had been not quite so clear in the discussion before."

More than 700 Icelanders are believed to among those on the list, the full extent of which is to be released next month. According to Ingolfdottir, it was common practice - ahead of the banking crisis - for banks to be pro-active in offering to set up shell companies for individuals wishing to hide money in offshore accounts.

"If we take this issue with the prime minister aside, I think the fact that we have about 700 Icelanders on this list in this nation of 333,00 people - that comes from this crazy situation that we had before 2008, when there were very shaky practices being done within the banks."

Burges also thinks it was not rare for the island nation's wealthy to siphon money into undeclared firms. As a journalist in 2004, he published a report on a similar route being used, making Icelandic money disappear offshore, via Luxembourg, to be reinvested in Iceland. "I though I had revealed a scandal but, after that, we have seen droves going the same route," he said, adding that the full extent of the scandal remained to be seen.

"It was normalized during the boom years and we remain to see what names are on this list," Burges added.