A new report released on Monday points the finger at the former prime minister and banking leaders for the 2008 banking collapse, which plunged the North Atlantic nation of Iceland into an ongoing recession. 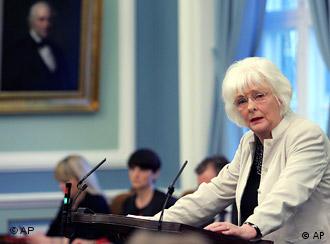 In 2001, Icelandic banks were deregulated, paving the way for banks to upload debts

The 2008 financial collapse that continues to devastate the North Atlantic nation of Iceland was caused by 'extreme negligence,' according to a report released Monday.

The findings of the Special Investigation Commission (SIC), known as the "Truth Report," said that government leaders, including the ex-prime minister and the former head of the central bank, were to blame for the collapse.

Filling more than 2,000 pages, the report was commissioned by lawmakers at the end of 2008, shortly after all three of the country's main banks collapsed following difficulties in refinancing their short-term debt. The bust led to the devaluation of the national currency, the kroner, and dragged the island nation of 230,000 people into a financial crisis from which it has yet to recover.

"The private banks failed, the supervisory system failed, the politics failed, the administration failed, the media failed and the ideology of an unregulated free market utterly failed," Sigurdardottir said in a statement.

Iceland's robust economy prior to the crisis was heavily based on its thriving banking sector. Its three major banks, Kaupthing, Landsbanki and Glitnir, saw the value of their assets skyrocket from 100 percent of Iceland's gross domestic product (GDP) in 2004 to 923 percent at the end of 2007, according to IMF figures.

The rapid growth was at the root of the collapse, SIC committee member Sigridur Benediktsdottir said.

"In seven years, the three banks became 20 times bigger and that is the main reason for the fall of the economy,"Benediktsdottir told reporters.

Iceland hopes to strike a last-minute deal with Britain on the repayments of billions of dollars of British savings lost by an Icelandic bank. (26.02.2010)

The European Union may soon have a 28th member. The bloc's executive body has recommended a start to negotiations allowing Iceland to join the EU. But can member countries look past Iceland's recent banking collapse? (24.02.2010)

Iceland's parliament has approved a bill to pay back Britain and the Netherlands the compensation they paid customers of a failed Icelandic bank. (31.12.2009)