The town of Wolfhagen has been remembering local politician Walter Lübcke, who was shot dead in an apparent act of right-wing violence. Meanwhile, Chancellor Angela Merkel said Germany had a duty to confront extremism. 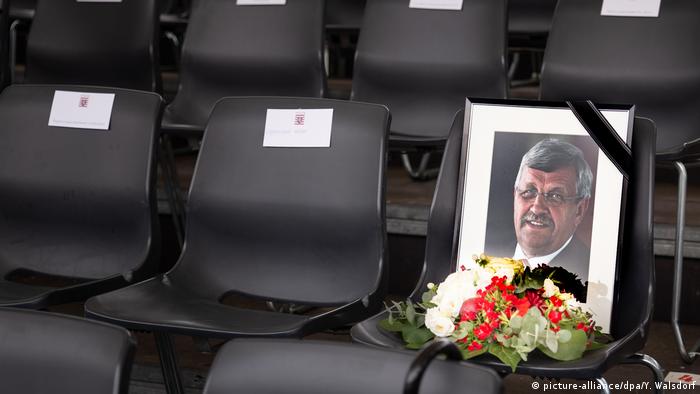 Hundreds of people gathered in the German town of Wolfhagen on Saturday to commemorate local politician Walter Lübcke, who was shot dead at his home in what prosecutors suspect to be a politically motivated killing.

The number present at the vigil far exceeded what had been expected, with participants bringing candles as a mark of respect for acts of resistance against right-wing extremism.

"He was murdered as a Christian," Gernot Gerlach, deacon of the local Protestant church district, told those who gathered.

Lübcke, head of the administrative district of Kassel, was shot in the head at close range on his village terrace early in June.

The 65-year-old member of Angela Merkel's conservative Christian Democrats (CDU) had become known for his pro-migrant views. He had received death threats after suggesting the individuals who opposed immigration to Germany were free to leave the country.

Police last week arrested 45-year-old suspect Stephan E. over the killing, after finding DNA at the scene. Investigators said he was known to hold extreme right-wing political views. Stephan E. was linked to the militant neo-Nazi group Combat 18 and had convictions for attacks against ethnic minorities.

Speaking at an annual gathering of Protestant churches in Hamburg, Merkel said right-wing extremism should be "combated early on and without any taboos."

"For this reason, the state faces demands at every level and the government is taking it very, very seriously."

The chancellor added that the killing was "not just a terrible act, but a big challenge for all of us to check on all levels for extreme right tendencies or connections."

Senior members of Merkel's CDU have criticized the Alternative for Germany, a far-right political party, for spreading "hate and incitement," saying it is partly to blame for Lübcke's death.

The Office for the Protection of the Constitution, Germany's domestic intelligence service, estimates that the country is home to some 12,700 potentially violent far-right extremists. A survey by the Civey polling group showed 60% of Germans thought the government was doing too little against them.