In a scrappy and defensively stubborn match, Germany battled to a brave 1-0 victory over France thanks to a Mats Hummels header and find themselves in their fourth consecutive World Cup semi-final - a unique record. 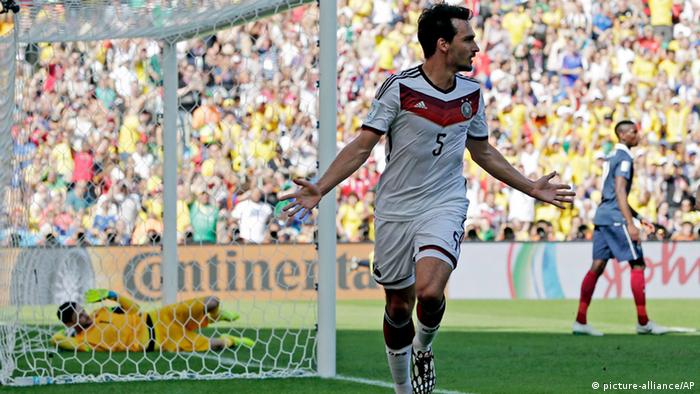 All eyes were on coach Joachim Löw's selection before the game, and his starting lineup had a few surprises in it. Striker Miroslav Klose started for the first time at the 2014 World Cup, while captain Philipp Lahm moved from midfield to right back, leaving Bastian Schweinsteiger and Sami Khedira in central midfield. Per Mertesacker was dropped and there was no start for Andre Schürrle. France made one change to their starting XI: Antoine Griezmann replaced Olivier Giroud.

Löw's side started brightly in a sunny Rio de Janeiro, showing the kind of intent that was lacking against Algeria. Hummels was called into action in defense, but the Dortmund defender then revealed his attacking strengths by heading Germany into a 13th-minute lead. Toni Kroos delivered a free kick from the left-hand side and Hummels held off Raphael Varane to guide the ball in off the crossbar.

With Lahm at right back, Germany focused their attacks down the right wing. Klose nearly got on the end of one of those crosses, and wanted a penalty after a tug from Mathieu Debuchy, but referee Nestor Pitana disagreed. 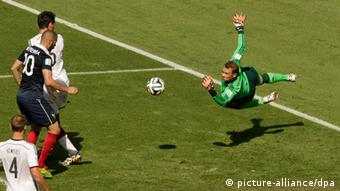 With 10 minutes left in the first half, France stirred themselves into action and nearly equalized immediately. Mathieu Valbuena's half-volley was saved superbly by Manuel Neuer, before Hummels got in another block. France finished the half on top with Neuer having to save from Benzema again, but remained a goal down at the break.

France started the second half with as much vigor as they ended the first, but couldn't find the final touch they needed. Joachim Löw's charges continued their improved attacking play, but lacked the necessary accuracy to double their lead.

As the hour mark ticked over, both sides started to tire in the Brazilian heat. Sami Khedira was booked for a late tackle and Neuer saved from Rapahel Varane as France continued to pose more questions. 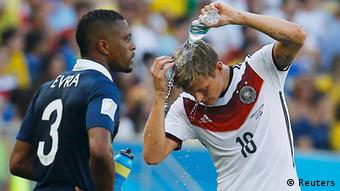 The temperatures were beginning to affect the pace of the game, and hydration was needed

France brought on striker Loic Remy and changed to a 4-4-2 as their desperation for an equalizer grew. Löw's men became sloppy in possession as a semi-final berth loomed - Hummels once again throwing his body in front of a Benzema effort to keep Germany ahead.

Ten minutes from the end, substitute Andre Schürrle had a glorious chance to double Germany's lead, but his low strike was saved by Hugo Lloris. Two minutes from time, Schürrle saw yet another good chance blocked by Varane as Germany looked to exploit the obvious space left by a resurging French team.

Right at the death, Benzema had a superb chance to send the game into extra time, but Neuer made another strong parry to keep Germany's lead safe and send them into a semi-final where they'll face Brazil.

Only three European teams remain at the World Cup in Brazil. That will be cut to one, when one of France or Germany heads for the exit door. But Löw says there will be more from his team. (04.07.2014)

Rest days give Löw time to ponder ahead of France game

Germany's footballers are licking their wounds after a tough game against Algeria. While the players still have some time to recover, Joachim Löw has some serious thinking to do ahead of Friday's quarter-final match. (03.07.2014)

If you have any trusted homespun remedies for the flu, send German coach Joachim Löw an email. A summer sniffle sidelined center-back Mats Hummels against Algeria, hobbling Germany's defense and attack alike. (01.07.2014)