Russia's Mount Elbrus is heaven for winter sports fans, who find snow there year-round. But retreating glaciers and more frequent avalanches are key indicators of a changing climate – and tourism is also taking its toll. 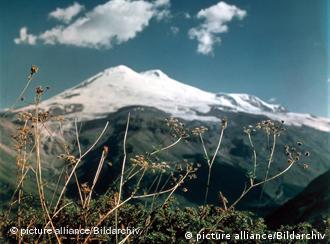 One of the world's seven summits, Elbrus has snow all year round

At 5,642 meters, Russia's Mount Elbrus is Europe's highest mountain, as well as one of the seven summits of the world. Yet even a place more than three miles above sea level is not immune to the threats of climate change.

The tallest peak in the Russian Caucasus, the region along the border to Georgia, Mount Elbrus bears witness to a global trend of melting glaciers.

For more than five decades, Moscow-based glaciologist Natalia Volodicheva has visited Mount Elbus to monitor the steady retreat of the Bolshoi Azau glacier tongue. The 71-year-old researcher has kept a collection of photographs to illustrate the phenomenon, which has gathered in pace in recent decades.

Sifting through them on the base of the mountain, she picks out an image from 1989.

"The glacier has a steep face, which shows that it has already been retreating partly," she told Deutsche Welle. "All photographs taken later show it getting smaller and smaller. The photos from the last couple of years I didn't even bring."

"You see for yourself that the glacier is not even visible anymore, from where we stand, it retreated all the way around the corner." 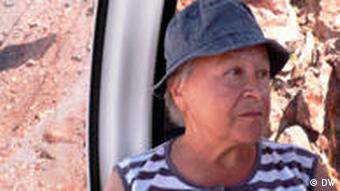 Natalia Volodycheva has tracked glacier retreat at Elbrus for 50 years

For Volodicheva, this trend – along with increasingly frequent avalanches on the mountain – is proof that climate change is altering the landscape of the Elbrus region. Avalanches have killed more than 50 visitors to Elbrus since 2002, and as the glaciers here retreat, the threat of more deadly accidents grows.

Yet voices warning of the dangers of climate change are only slowly finding an audience in Russia. Many scientists here are unwilling to back the global consensus.

Others, like climate expert Oleg Anissimov, highlight the potential benefits of warmer temperatures in Russia.

"Russia can use global warming for its purposes, especially when we are talking about the wintertime in areas like Yakutia and Western Siberia," said Anissimov, a member of the United Nations Intergovernmental Panel on Climate Change.

"There will be obvious economic advantages – we will have less freeze and more water resources, and also people will feel more comfortable in the cold months and have less depression." 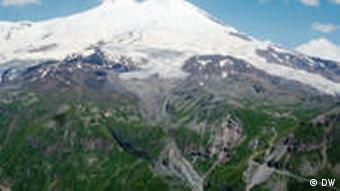 Glaciers have retreated markedly on Elbrus in recent decades

Financial considerations play an important role here in the Elbrus region, which has been totally dependent on tourism since the fall of the Soviet Union. The area is blessed with snow year-round – making it a major destination for mountain climbers, snowboarders and skiers.

Volodychev, says she has "very mixed feelings" about the role of the tourism industry in the region.

"I understand that people want to see the beauty of the place, but I feel sorry about the once pristine landscape."

"Tourism here started about 100 years later than in the Alps for example, but now it is developing fast. I am watching that with some sadness."

Despite the volatile political situation in the Caucasus, which has seen ongoing territorial conflicts between separatist fighters and the Russian government, more than 350,000 people visit the Elbrus region every year. The number of tourists is steadily rising – and with them, their pollution.

Passengers riding the newly constructed gondola on the mountain are treated to a panorama of plastic bags, bottles and other debris scattered beneath them. The lift was built a couple of years ago, just beside the old one from Soviet times. During peak tourism season, both gondolas are needed.

Artyem, one of the workers at the lift, knows how dependent his cash-strapped region is on tourism – and what that means for the local landscape.

"On the other hand, it is bad that so many people come here – they cause a lot of rubbish," he said. "We are trying, but we can't clean it all up."

"For a while there was talk about closing the mountain for a year to clean everything, but until now, nothing happened. We'll live and see what happens, as we say here." 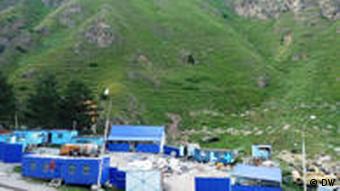 Illegal constructions are springing up, despite the risk of avalanche

Although Elbrus and its surroundings have been protected as a national park for years, excavation work on new buildings continues in the Azau Valley down below the ski lifts. Visitors are greeted by construction noise – and an array of shops, market stalls and hotels are mushrooming alongside the mountain.

Even as debris and waste accumulates in the valley, excavation work for new buildings and parking lots continues – oftentimes without construction permits, and even in areas known to be threatened by avalanches.

Yet local and regional authorities tolerate the situation. Svetlana, a manager at one of the many hotels surrounding Mount Elbrus, is aware of the problems.

"We have interfered a lot with nature," she said. "There used to be only one hotel that was owned by the state – and you see how many there are now. That is causing a lot of rubbish - and many trees are cut down to make room for new buildings."

While she acknowledged that Russians are aware of the region's degradation, the hotel manager doesn't expect people's behavior to change.

"Here where our hotel stands, about 110 years ago used to be a glacier," Svetlana said. "But the region will continue developing this way – the people here just don't find any other income."

With an environmental catastrophe looming large as the Himalayan glaciers melt at a shocking rate, ministers and other delegates from the countries affected are scrambling to find solutions to the problem of global warming. Countries such as China, India, Pakistan, Bhutan, Myanmar, Afghanistan, Kyrgyzstan, Tajikistan and others participated in the three day long conference hosted by Nepal. (01.09.2009)

Russia and the European Union stressed their unity and steered away from open disputes at a summit in Stockholm as they sought each other's backing on the issues of trade and climate change. (18.11.2009)