HRW: Thailand locking up thousands of migrant children | Asia | An in-depth look at news from across the continent | DW | 02.09.2014

Thai authorities are keeping children with refugee or asylum seeker parents locked up in unsafe conditions, a new HRW report finds. The rights group's Alice Farmer tells DW why she believes the practice must be scrapped. 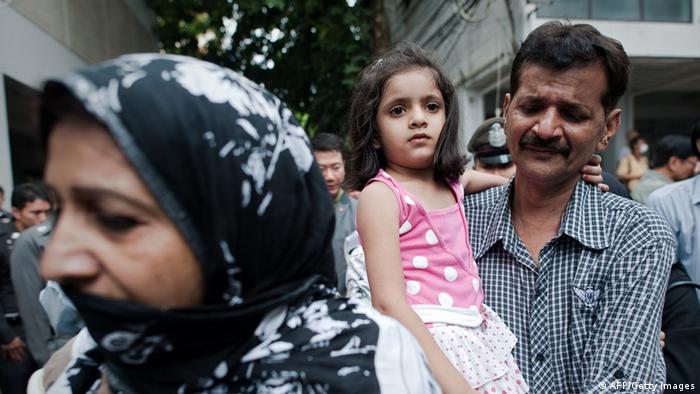 Thailand is unnecessarily punishing thousands of child migrants because of their parents' illegal immigrant status, said a Human Rights Watch (HRW) report released on September 2. The paper says the decision by Thai authorities to detain the children for prolonged periods of time endangers their welfare, and can lead to future developmental problems.

While immigrants from the nearby countries of Burma, Cambodia and Laos are normally sent back within a few days of arriving in Thailand, those coming from further away can be held indefinitely for years, waiting to find out if they will be resettled or returned to their native lands. Estimates put the number of migrant children in Thailand at around 375,000, with some fleeing violence from as far away as Somalia and Syria.

The 67-page long document titled "'Two Years with No Moon': Immigration Detention of Children in Thailand" describes how infants and young children are being locked up in police holding cells or detention centers, sometimes surrounded by strangers, and forced to sleep on hard floors without any bedding. It says the situation causes the children and their families' extreme mental stress, while a lack of education, proper nutrition and even physical space stunts their normal development.

Alice Farmer, children's rights researcher at HRW says in a DW interview that Thailand's practice of holding these children is not only cruel, but also makes "a mockery of government claims to protect children."

DW: What are the key findings of your report?

Alice Farmer: Our report finds that Thailand routinely subjects thousands of children to arbitrary detention in squalid immigration facilities and police lock-ups every year. Thailand detains children of all ages, including infants and toddlers. Families are also detained, though parents and children might be split up, as well as unaccompanied migrant children. 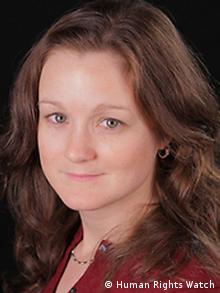 Farmer: 'Children in detention in Thailand face a bare and brutal existence'

Why is the Thai government detaining these children and for how long?

Thailand detains children because they have irregular immigration status, despite international laws dictating that children should never be detained for reasons of their immigration status. Around 100 children, primarily from countries that do not border Thailand, may be held for months, years or even indefinitely. Most others are from Burma, Laos, and Cambodia, and are held for days or weeks.

In 2013, the Committee on the Rights of the Child, the body of independent experts charged with interpreting the Convention on the Rights of the Child - a major international treaty binding on Thailand - directed governments to "expeditiously and completely cease the detention of children on the basis of their immigration status." Yet Thailand continues to detain migrant children indefinitely without recourse to judicial review. This amounts to arbitrary detention prohibited under international law.

How are children treated in these facilities? What are the conditions like?

Children in detention in Thailand face a bare and brutal existence, in squalid conditions. Children are held in overcrowded cells; some of those we interviewed said their cells were so crowded they had to sleep sitting up. Even when they had room to sleep, they routinely reported sleeping on tile or wood floors, without mattresses or blankets. Children described filthy, stinking toilets, as well as rats, insects, and poor air quality in their cells. Children rarely have access to places to play, fresh air, or education.

What emotional damage does the prolonged detention inflict on these children?

We found that detention endangers children's physical health as they rarely receive the nutrition or physical exercise they need. One girl I spoke with told me that when she was released from detention after several years, her muscles had atrophied and she could barely run. According to medical experts, immigration detention negatively impacts children's mental health by exacerbating previous traumas - such as those experienced by children fleeing repression in their home country - and contributing to lasting depression and anxiety. 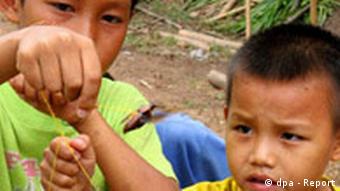 Doesn't the Thai government ultimately bear the responsibility for these children?

Thailand is responsible for all children in its territory, and cannot discriminate by national origin, according to the Convention on the Rights of the Child. Thailand is entitled to control its borders, and it faces numerous migration challenges due to its geographical location and relative wealth. Yet detaining children in this manner is abusive and violates its international obligations.

What do you urge the Thai government to do?

We urge the Thai government to enact legislation and policies to expeditiously end immigration detention of children consistent with the recommendations of the Committee on the Rights of the Child.

Thailand should adopt alternatives to detention, including supervised release and open centers that fulfill the best interests of the child and allow children to remain with their family members or guardians in non-custodial, community-based settings. Until children are no longer detained, Thailand should drastically improve conditions in immigration detention facilities. The international community must hold Thailand accountable to its international law obligations.

Alice Farmer is Children's rights researcher at Human Rights Watch, where she specializes in issues faced by migrant children.