In a new report, Human Rights Watch is calling on the Ethiopian government to launch an investigation into the treatment of the Oromo people. Hundreds have been killed during months of protests against a re-zoning plan. 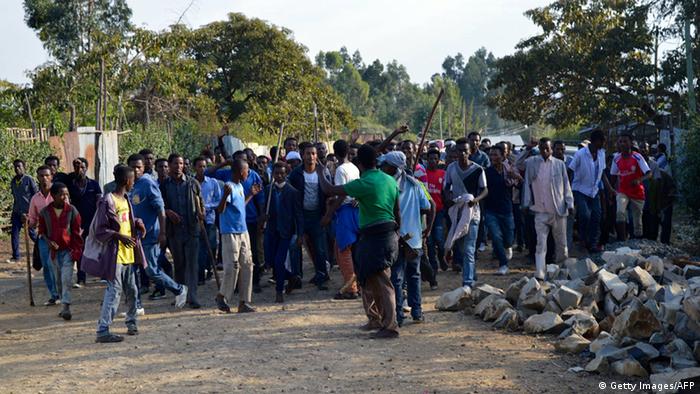 According to the latest report from Human Rights Watch, Ethiopian security forces killed more than 400 Oromos and arrested tens of thousands more since protests began in the country's Oromia region in November 2015.

Oromia is one of nine regional states organized by Ethiopia's system of "ethnic-based federalism," which is part of the country's constitution. Protests started over a government plan to expand the area of the capital, Addis Ababa, into Oromia state.

In January, the Ethiopian government announced the cancellation of the Addis Ababa Integrated Development Master Plan.

But for the Oromo people, tensions run deeper. They say they have been marginalised for decades, and feel they have been cheated of political and economic representation by a succession of non-Oromo governments. By the time the government abandoned the Master Plan, the violent response to the Oromo protests had added to their grievances.

Now Human Rights Watch (HRW) is calling for Ethiopia's influential foreign allies to condemn the human rights situation in the country. DW spoke to Felix Horne, the organization's Ethiopia and Eritrea researcher, about its latest report.

DW: What is the message of HRW's 61 page report on the crackdown in response to the Ethiopian Oromo protests, which was released today?

Felix Horne: The main message is that the security forces have used excessive and lethal force throughout the protest that started in November. Up until this time, there has been no credible independent investigation into those abuses, and no attempt to hold those responsible to account. We found that an estimated 400 people were killed, that tens of thousands were detained, many of whom have been released, but many of whom are still in detention. So the scale of the crackdown was something that's been quite unprecedented in Oromia in recent years.

The Ethiopian government has said it has cancelled the Master Plan. Has this brought any change to the protest?

Interviewing the protestors around that time, one thing that was clear is that on one hand there was a fair bit of skepticism over whether or not the government would follow through on its promise to cancel the plan, and the government has continued to market and promote the idea of development. So a lot of protestors felt that it was just business as usual, that Oromos living around Addis would continue to be displaced from their land.

The other thing that's important to realize is that as the protests matured and evolved, the protestors were no longer just concerned with the master plan. By the time of the master plan cancellation, they were equally concerned by the conduct of the security forces, and also by decades of perceived and actual abuses at the hands of different governments.

How independent was your reporting? Did you approach the government?

We constantly try to reach out to the government and give them a chance to defend themselves, but unfortunately, they are not willing to speak to Human Rights Watch formally about these allegations. We did speak to a number of local and regional government officials who were willing to speak off the record, some of those had left their posts, and some of them were still in their posts, but of course they spoke to us on the condition that their names and identifying details not be shared, because thy are also afraid of reprisals from above. Our reports are intended to be balanced and fair, and we give the government every chance to present its side of the story.

In the report you mention witnesses describing the situation. What kind of witnesses were these people? Were they victims or were they those who had observed the events?

We interviewed over 125 individuals in depth and we also spoke to several hundred more. It varied a lot, sometimes they were victims, sometimes they were those that were beaten by security forces or those that were detained. In other cases, they were participants in the protests that perhaps didn't have any problems, or they were just witnesses, they saw the different incidents or abuses that were happening. So it varied quite a bit. Of course nothing is in that report that cannot be corroborated by multiple sources. Some of the most grievous stories that we heard are not in the report because we were not able to corroborate them.

There have been some strong statements from Ethiopia's allies, including from the European Parliament. But those have been few and far between. I think for a long time, there has been this idea that quiet diplomacy is the way to bring about positive change in terms of the human rights situation in Ethiopia. But while Ethiopia's partners have been engaging in that quiet diplomacy, the human rights situation has just got worse and worse. So we think its time for much more robust and public condemnation of these types of abuses, and that applies to all of Ethiopia's development partners, and other allies. Of course the main ones are the United States, the United Kingdom, and the European Union.

A human rights watchdog has reported that 75 people have been killed protesting a government project in the Oromia region. The government has described the protesters as "terrorists," prompting international concern. (19.12.2015)

DW's Merga Yona's, an Oromo journalist, explains why the conflict has gone on so long.