In an interview with DW, a spokesman of the Ethiopian Federal Democratic Unity Forum accused the government of abusing the country's constitution with its plans to expand the capital Addis Ababa. 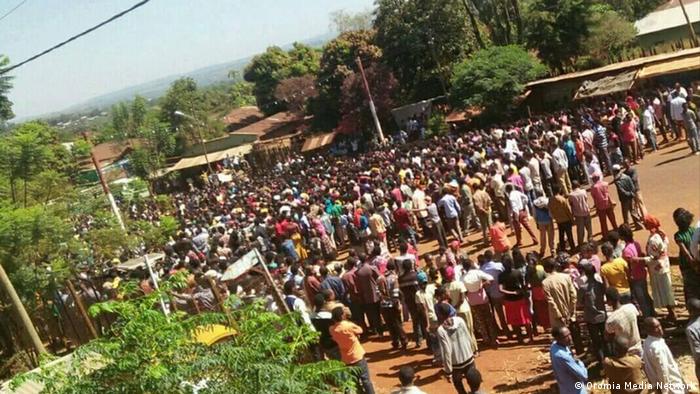 Violence and chaos gripped Ethiopia this week as thousands of demonstrators took to the streets in protest against government plans to expand the capital Addis Ababa. Human Rights Watch said at least 75 people were killed in a bloody crackdown by heavily armed security forces. The demonstrations have spread to several towns since November, when students spoke out against plans to expand the capital into Oromia territory, a move the Oromo people consider a land grab. DW spoke to Merara Gundina, chairman of the opposition Oromo Federal Congress, in Addis Ababa.

DW: What exactly are you demonstrating against?

Merara Gundina: The Addis Ababa Master Plan is part of a larger land grab by the Ethiopian government around Addis Ababa, which has displaced not less than 200,000 people. Secondly, under federalism all the boundaries are being eroded by the ruling party which is bent on taking the land. People are very angry with the government and people who wanted to see change are frustrated.

Under the Ethiopian constitution all land belongs to the state, with people living there legally considered tenants. Doesn't this allow the government to carry out any developments that may serve the interests of all Ethiopians?

No, no, the government is misusing it. The constitution says the land belongs to the public so it doesn't allow the government simply to tell the people "go away" and it takes the land. No, it says there are bonds of state in the name of the people and there are individuals owning the land. It is the ruling party that is misusing the constitution. In fact, the state itself is privatising the country.

We understand you have vowed to continue the demonstrations despite the killings and Prime Minister Hailemariam Desalegn declared on television that the government would act without mercy. Is it not better to solve these issues through talks?

We continue to support the cause of our people. We continue our peaceful struggle. We cannot be intimidated as the government has done. We have popular support, we have millions of people behind us. The government cannot silence us easily. We are following the constitution but we are against the arbitrary misuse of the constitution by the ruling party. Our people will continue.

Is it true that your organization is getting support from outsiders?

The diaspora is far away. It's school kids, high schools and universities and the government is simply accusing the left and the right. Probably the diaspora is very active in the media because the local media are totally controlled by the government. We have no access to the media and the diaspora have some media outlets and they report what is happening in the country. But a diaspora of a few thousand cannot move millions of people.

Opposition groups say security forces have killed 20 people in three weeks of protests over a government re-zoning plan. Members of Ethiopia’s largest ethnic group view the plan as a further infringement on their rights. (11.12.2015)