How women are pushing back against rape culture in South Africa

South Africa's sexual offense statistics are alarming. A high-profile court case sparked a national debate about rape culture as well as the formation of a group that is fighting for justice for survivors. 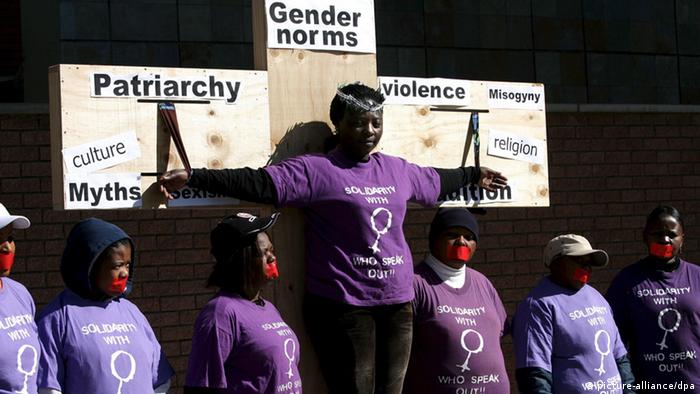 It was a galvanizing moment.

It was May 2006 and South African Vice President Jacob Zuma had just been acquitted of rape. Thousands of his supporters - both men and women - stood outside Johannesburg's High Court to support the man who would later become their president.

But amidst the sea of yellow, green, and black - the colors of the ruling African National Congress party - a group of roughly 20 women dressed in purple T-shirts stood in stark contrast to the crowd in solidarity with Zuma's accuser, Fezekile Ntsukela Kuzwayo, who was known to the public as Khwezi.

Kuzwayo and her comrades had endured daily heckles and threats from Zuma's supporters. After the ruling came through, they fended off violent provocations from the masses, quietly removed their purple T-shirts and made their way home.

"It was a sad day for us as the women out there," said Mpumi Mathabela, a coordinator with the One in Nine Campaign, which fights on behalf of rape survivors and stood by Kuzwayo during the trial.

In the days and months following the court's decision, the threats against Kuzwayo intensified and her mother's home was torched.

"It was after the judgment that her life was in danger and was constantly threatened," said Mathabela. "We had to think through how we could get her out of the country - she was always in danger." 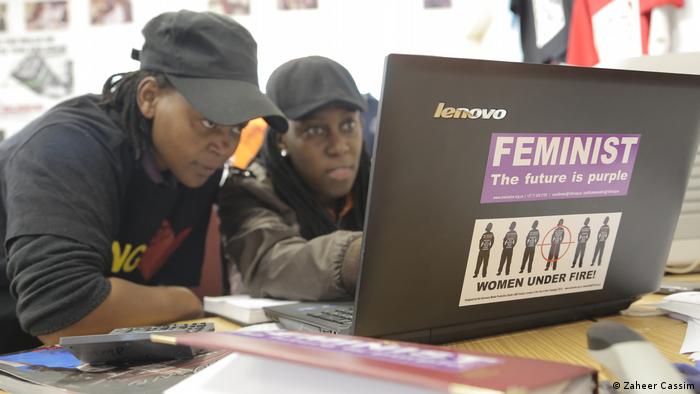 Kuzwayo and her mother were forced to flee South Africa and received asylum in the Netherlands. Her court case and the perceived injustices in South Africa's legal system were the catalyst for the formation of the One in Nine Campaign.

The name has roots in a sobering statistic: Research indicates that of every nine women who are raped in South Africa, only one will go and report that rape.

Almost a decade later, the rape statistics remain startling. Police figures released for 2015 and 2016 recorded 51,895 sexual offenses. The majority of those - over 42,000 - were classified as rape, according to the NGO Africa Check. Fifty-eight rapes each day. But the true figure is believed to be much higher as rape and sexual assault are under-reported crimes, say representatives of the One in Nine Campaign.

Since its inception, One in Nine has brought together some 400 members who pledge to take a stand against sexual violence. The small office of nine in Johannesburg is mostly funded through private and public European donors.

Over the years, the organization has appealed to the government for changes in the law, held demonstrations outside the courts in support of rape survivors taking the stand, disrupted anti-feminist marches and helped to expose shortcomings and the lack of understanding of women's issues and of sexual violence in South Africa.

"When there is a woman who has reported a rape, and we are supporting directly, we will build consciousness around that case," said Kwezilomso Mbandazayo, a member of the campaign and a former program manager with the group. "We pull in aspects of political education to understand why violence happens, what kind of society we live in, hold workshops, dialogues, film-screenings."

The campaign also tries to highlight particular cases and specific issues those cases may bring up. In August a small group of women affiliated with One in Nine staged a silent protest during a speech given by President Zuma at a campaign rally in Johannesburg. The activists held up placards that read "Remember Khwezi" and "Ten Years Later" as he spoke.

"They did it to remind the country about Khwezi. There were a lot of reporters there, so it got a lot of coverage," said Amanda Hodgeson, a programs coordinator with the campaign.

After Zuma finished his speech, which was broadcast live throughout the country, the protesters were quickly and quietly removed. Zuma refused to respond to the activists, but the media was abuzz about the protest for weeks afterwards, says Hodgeson.

A voice for women

One in Nine member Mbandazayo says the organization provides an essential service in a country that has overcome many injustices but still overlooks issues of sexual violence against women. 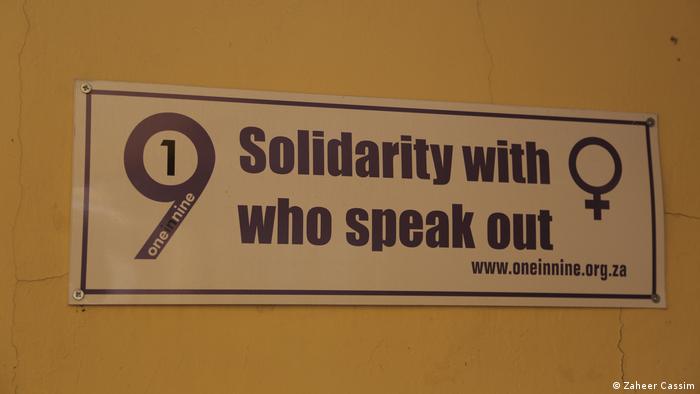 A familiar refrain at the One in Nine Campaign headquarters

"Our role is important in South African society, especially because the narrative of South Africa tells the story of a South Africa with great laws, that we are a country that defeated apartheid, that now struggles with just a few aspects but overall we're doing well," said Mbandazayo. "The truth, however, is that for the poor, working class, black women particularly, democracy doesn't mean much."

Progress may be slow, but the One in Nine Campaign, with help from other organizations such as South Africa's People Opposing Women Abuse, have helped change the conversation surrounding sexual violence against women and women's rights in South Africa, say analysts. Without pressure from these groups, the media and the public engage in victim-blaming and don't provide enough analysis about why sexual violence happens or to whom it happens.

"There would not be a clear public debate about these matters, journalists wouldn't be picking it up in the way that they do," said Shireen Hassim, a political science lecturer at the University of Witwatersrand in Johannesburg. "I don't think the public interest litigation people [lawyers] would be picking it up the way they do, so I think it's created a certain kind of public debate and awareness."

This project has been funded by the European Journalism Centre via its Innovation in Development Reporting Grant Program.