How will the far-right AfD party shape the European Parliament? | Europe | News and current affairs from around the continent | DW | 16.06.2019

How will the far-right AfD party shape the European Parliament?

Germany's right-wing populist AfD party will only have limited influence in the European Parliament. But its lawmakers hope to learn from more seasoned populist leaders. 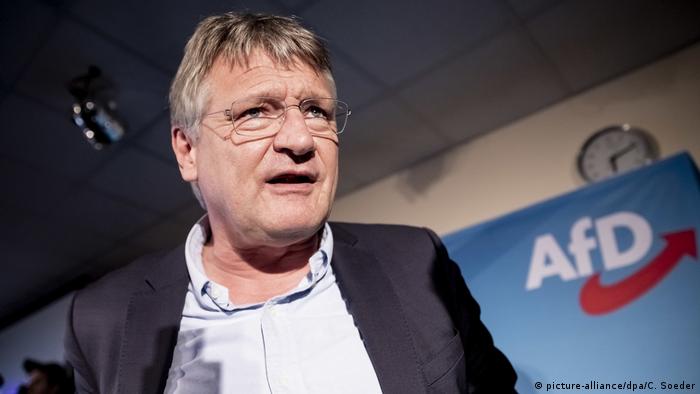 At the 2014 European Parliament elections, Germany's right-wing populist Alternative for Germany (AfD) won seven seats. But over time, all members — except Jörg Meuthen — left the party. "Out of all European right-wing parties, the AfD has been the least influential and least respected," said German political scientist Claus Leggewie.

But following the most recent European elections in May, the party wants to make a fresh start. This time, it won 11 seats, and Meuthen is sticking around to lead them.

The party has tried to send representatives from its various factions to Brussels. One MEP is intended to represent the working class, and another Germany's small and medium-sized enterprises. There's also an Islam critic, a devout Christian, a right-wing intellectual, a representative of the party's ultra right-wing faction, an MEP from eastern Germany —  and several moderates, too.

But will they manage to come together into a cohesive political unit? After all, the AfD is notorious for its infighting. And few MEPs have any prior experience working in the European Parliament.

The AfD has joined the newly established far-right nationalist group in the European Parliament, with 28 members coming from Italy's League party and 22 from France's National Rally party. Both emerged as the strongest parties in their countries during the May elections.

The influence of the AfD party within this group will most likely be limited, due to its smaller number of MEPs. But many in Brussels also have an aversion to anything that smacks of German dominance, explained Leggewie, further limiting the AfD's clout.

The AfD's 88-page EU election manifesto advocates many positions that differ significantly from the beliefs of fellow European right-wing populist parties, showing division on a range of policy issues. Those divisions exist within the wider party as well.

During the group's first press conference, Jussi Halla-Aho of the Finns Party, for instance, stated that the euro common currency should be abolished. Harald Vilimsky, of Austria's Freedom Party (FPÖ), insisted that "we need the euro for our prosperity." The populists are also divided over the EU's structural funds.

"German interests, unless they pursue a supranational or multilateral goal, are different to French, Spanish, Polish and above all Italian interests," said Leggewie. This is why he believes populists "will struggle to form a cohesive alliance."

So far, the bloc's right-wing populists have largely focused on highlighting everything they oppose, namely a further influx of migrants and the emergence of an EU super state. The idea is that this smallest common denominator will serve as a glue to unite the populists.

Having MEPs represent the AfD in Brussels will not only allow the party to debate EU legislation, but also give it a platform "to make itself look more important than it is and distract from its diminished standing at home," explained Leggewie. The AfD is now among Europe's populist stars, and the party hopes this will translate into "political gains in Germany."

The AfD also aims to learn from other right-wing populists parties which, unlike the AfD, have been around for decades. Damian Lohr, who heads the AfD youth wing, even dreams of forming an international right-wing populist youth group. But only time will tell how much Europe's various populists really have in common.

Consolidating its major party status in recent European elections, the AfD succeeded in part through the use of the arts in its campaigning. Critics say it's part of an ongoing push for "cultural hegemony." (31.05.2019)

Climate protection: Where do the EU's right-wing populists stand?

The EU's right-wing populists generally have little interest in climate protection, a new study shows. However, that hasn't stopped Germany's AfD and Britain's UKIP from voting against it in the European Parliament. (26.02.2019)

The AfD and other euroskeptic parties have formed a bloc ahead of the European Parliament elections. Various anti-immigrant youth organizations recently gathered in Rome, giving a sense of what might be to come. (05.04.2019)