How the work of radical photographer Tina Modotti stood the test of time | Culture | Arts, music and lifestyle reporting from Germany | DW | 05.01.2022

Modotti's modern shots remain style-defining, with Madonna being a collector. Yet, she traded in her camera in 1931 to serve the Communist Party of Moscow.

Tina Modotti's black-and-white photos might very well hang in singer Madonna's living room. The US superstar is one of the most prominent collectors of Modotti's work from the 1920s. Madonna, in fact, sold a Mercedes to fund the first retrospective of Modotti's work at the Museum of Modern Art in 1995.

After all, the two women have in common Italian origins and family histories of immigration to the United States. For both, their talent and ambition rendered them social climbers.

Modotti's photographs of roses, interiors, or a baby at the breast from the 1920s had a considerable influence on photography.

Although they are now almost 100 years old, they remain timeless in their simplicity and elegance.

Modotti was born 125 years ago in August 1896 and is remembered for being a modern woman who determined her own path in life.

She was highly involved in political events of her age, and photographed protests by Mexican farmers in the 1920s, before joining the Mexican Communist Party in 1927. At the same time, Modotti was an in-demand portrait photographer of the country's wealthy upper class.

In 1930, she was expelled from Mexico, her adopted country, for political reasons. 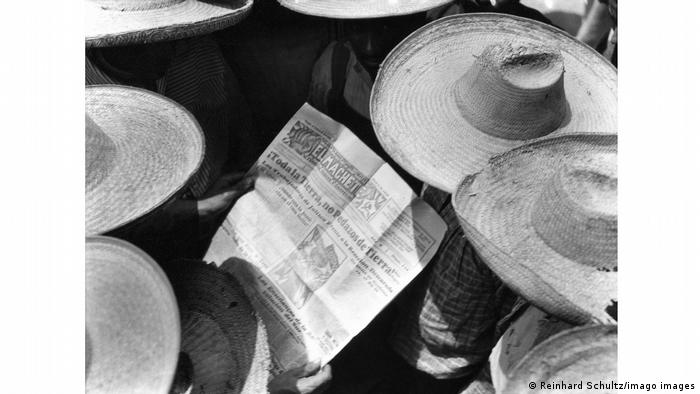 Modotti documented life in Mexico, as seen here with men reading a newspaper

She mixed and mingled with Mexico's artistic elite. The young Frida Kahloand her partner Diego Rivera — both also artistically and politically active in Mexico — belonged to Modotti's circle of friends.

When she abruptly died at age 45, 80 years ago, her Chilean friend Pablo Neruda, writer, anti-fascist and winner of the Nobel Prize for Literature, wrote a poem about this loss.

Sexual independence instead of marriage

"In her relationships, her sexuality and her career, she made difficult choices — sexual independence instead of marriage, political commitment instead of personal security, revolution instead of art," Margaret Hooks writes in her biography "Tina Modotti: Photographer and Revolutionary."

Starting in 1930, Modotti worked from Moscow for the Communist Party of the Soviet Union, led by the dictator Josef Stalin. She even ended her career as a photographer to work full time for the party.

Later, the party sent her to Spain, together with her lover, the Italian Communist party agent Vittorio Vidali.

There, both were active under false names, supporting the Republican Brigades against the fascist dictator Franco in the Spanish Civil War in the 1930s. 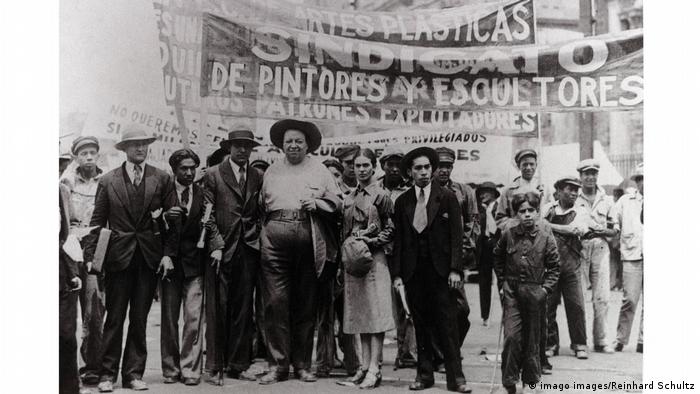 Modotti was friends with Frida Kahlo and Diego Rivera, among other Mexican elites

An exhibition after her death

She is said to have stopped using her camera in the years leading up to her sudden death on January 6, 1942 in Mexico.

But her artistic work remained popular, and a first exhibition was held in Mexico City shortly after her burial in March 1942. "Tina, the militant fighter, had not long been in her grave when Tina Modotti, the photographer, was revived," writes Hooks in her Modotti biography.

And although she was denied entry to the USA in the 1930s as a communist, her elegant and graceful photographs can still be seen in numerous museums and exhibitions in the USA, including the Museum of Modern Art in New York and the Philadelphia Museum of Art.

Modotti was born in Udine, Italy on August 17, 1896. Her father, a mechanic, immigrated to the USA in 1906. Modotti, whose full name was Assunta Adelaide Luigia Modotti Mondini, started working a factory at age 12 to support her family.

In 1913, when she was barely 17 years old, Tina traveled to the USA and worked as a seamstress in San Francisco. She worked as an actress in the city's Italian community, even appearing in several silent films.

In 1918, she moved to Los Angeles with her husband, Canadian poet Roubaix de L'Abrie Richey. It was there that she met the influential American photographer Edward Weston in 1921. She posed for his photos and eventually the pair became lovers. 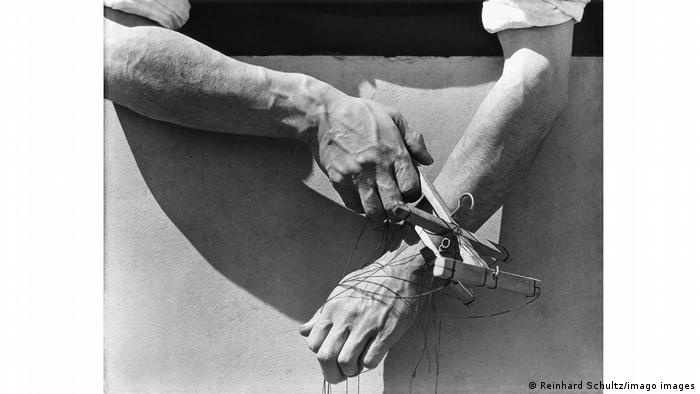 Modotti had a number of professions before becoming a photographer

Modotti traveled to Mexico with Weston for the first time the following year, where numerous intellectuals and supporters had been staying since 1910 in the wake of the Mexican Revolution and ensuing social upheaval. Her husband, however, died suddenly of smallpox.

This first visit to Mexico in 1922 was decisive for Modotti's path in life and her work.

Modotti returned to Mexico several times and during her visits, Weston taught her the basics of modernist photography.

It was here that Modotti started to photograph Diego Rivera's murals.

In 1926, she and Weston separated, and he returned to his family in the United States. 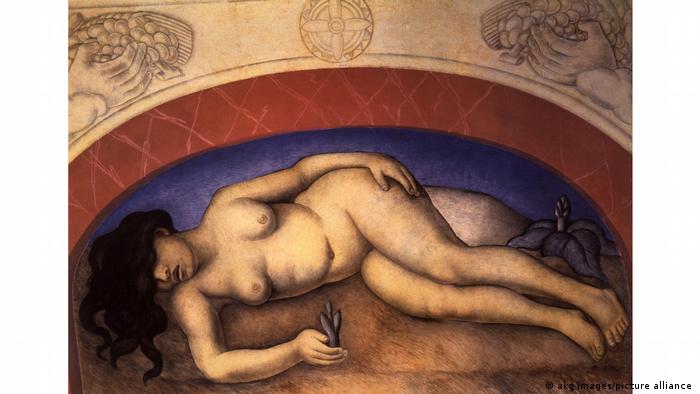 After Weston's departure, Modotti's most productive period as a photographer began, according to Margaret Hooks. In addition to photographing Mexican folk art, Modotti worked as a photo journalist for the Mexican magazine "El Machete." These shots became some of her best-known photographs.

Modern photos with a political message

But the country's wealthy and prominent upper class were also among her clients: Modotti made a living by taking their portraits. She also took a number of photos for pleasure: lilies, women and their children, abstract lines of wooden scaffolding and telegraph poles.

In Mexico, she had a relationship with exiled Cuban revolutionaryJulio Antonio Mella starting in 1928. In 1929, he was shot dead as he walked next to her in the street. The trial surrounding the murder served to discredit Modotti's reputation, claiming her lifestyle and political activities were immoral.

This horrified Mexican elites who had until that point had been happy to hire her for portraits.

In 1930, she was expelled from Mexico and went to Europe. 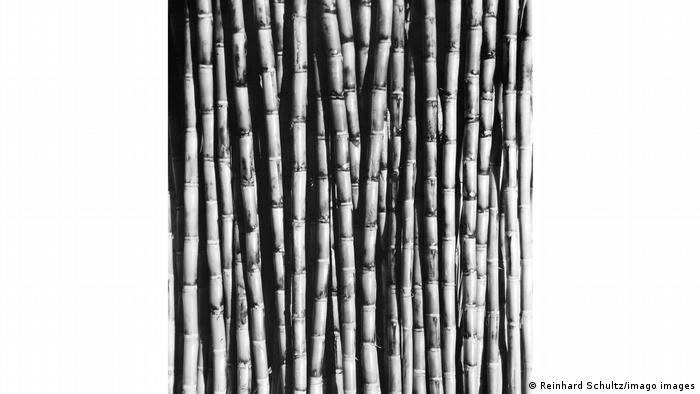 Madonna is one of the most prominent collectors of Modotti's work.

Political work instead of photography

She spent several months in Germany in 1930 where her works were exhibited, but she did not gain a foothold in the increasingly fascist country.

Out of money, she eventually accepted the invitation of the Italian Communist Vittorio Vidali to come to Moscow and dedicate herself to working for the Communist Party, first in Paris, then in Spain. 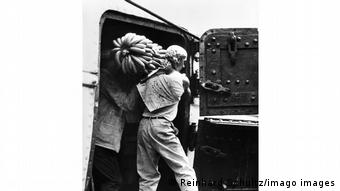 After the victory of Spanish dictator Franco, Modotti returned to Mexico in 1939. In Mexico City, the now 45-year-old lived in seclusion, with a meager income and little contact with former friends.

On January 6, 1942, as she was returning from a dinner, she died unexpectedly in a taxi. A doctor later determined that heart failure was the cause.

Thanks to support by prominent fans like Madonna — and the fact that her works were simply ahead of their time, Modotti's legacy lives on.

The photographs of the Italian photographer Tina Modotti were avant-garde in the 1920s. She was also ahead of her time in life.