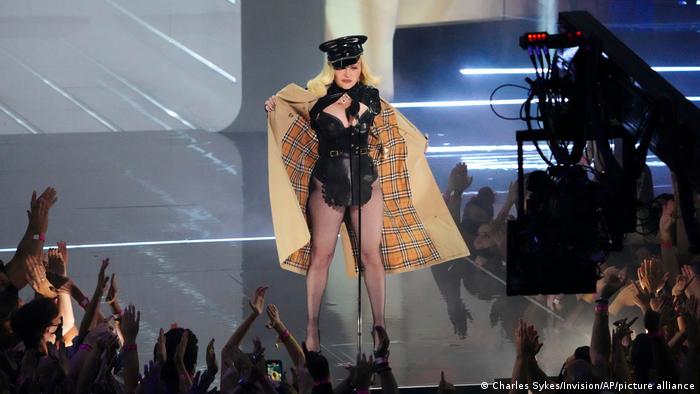 Forty years since MTV launched as a dedicated music video channel, the network's award show was back with a surprise appearance by none-other than Madonna, who in the inaugural 1984 event performed a show-stopping rendition of "Like a Virgin."

"They said we wouldn't last, but we're still here," Madonna told the New York City audience while wearing a dominatrix-style leather corset that sent social media into a frenzy.

The annual MTV Video Music awards were hosted by rapper Doja Cat, and in contrast to last year's scaled-back show during which celebrities accepted prizes via a video stream, this year's event took place in front of a full, mask-wearing audience.

Veteran pop stars Jennifer Lopez and Cyndi Lauper also made surprise appearances, much to the delight of fans.

Yet the evening's big winners included some of the music scene's freshest faces: Singer Olivia Rodrigo took home three awards, including best new artist and song of the year for her romantic ballad "Drivers Licence."

After her debut album Sour hit the top of the charts in recent months, the 18-year-old singer dedicated her win to "all the other girls who write songs on their bedroom floor." 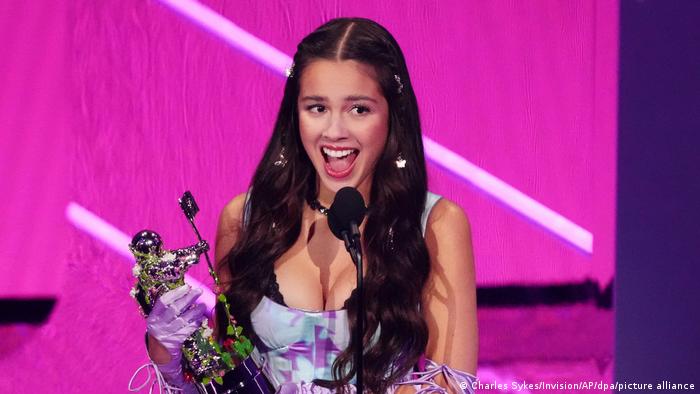 Lil Nas X, a gay, Black musician who had his breakout hit with "Old Town Road" two years ago, won video of the year for his fantastical, Greek mythology inspired video "Montero (Call Me by Your Name)" in which he gives the devil a lap dance in a hell-reminiscent landscape.

"Thank you to the gay agenda, let's go gay agenda!" said the 22-year-old while accepting his award.

His winning video set off social media hype that also saw the artist have a heated exchange with a sitting US governor, who took issue with the seductive clip, as well as the artist's sale of "Satan Shoes," inverted Nike Air Max 97s made with New York City art collective MSCFH.

One of the evening's most talked about moments was a sensual performance of the song "Wild Side" by R&B pop singer Normani. Her performance was a throwback to those of pop legend Janet Jackson who danced on fans during her 2002 tour. 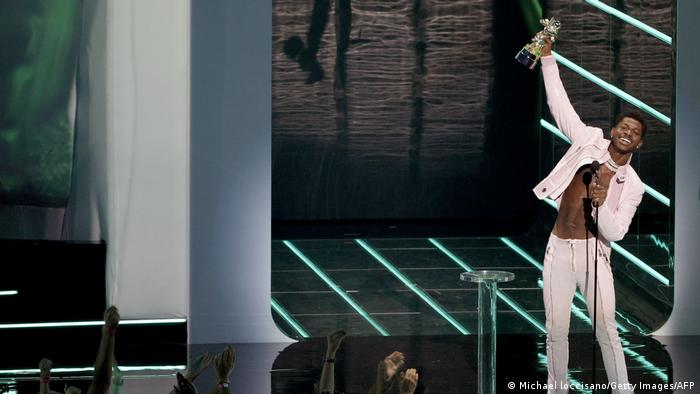 Other big names of MTV's past were honored throughout the evening, including 12-time Grammy-winning rock band Foo Fighters who performed several of their songs after receiving the Global Icon Award.

The award, which was given for the first time this year, pays homage to musical acts whose "unparalleled career and continued impact and influence has maintained a unique level of global success in music and beyond."

Justin Bieber returned to the VMA stage for the first time in six years and took home two awards: Artist of the year and best pop for his single "Peaches." He had been nominated for seven awards — more than any other artist.

The Martin D-18E guitar Kurt Cobain played for his legendary MTV Unplugged performance with Nirvana in 1993 is up for sale. Bids of $1 million have already been placed ahead of the auction.

Women make history at the 2021 Grammys

COVID made the award show a smaller-than-usual affair, but Beyonce still made big history. DW looks at some of the winners in the 83 categories.