How the UK could turn the Brexit ship around | Europe | News and current affairs from around the continent | DW | 27.06.2016

How the UK could turn the Brexit ship around

The majority of voters chose to leave the EU, but there are four ways in which the UK could still remain part of the union. With the help of an economist and a law professor, DW explains how the UK could exit the Brexit. 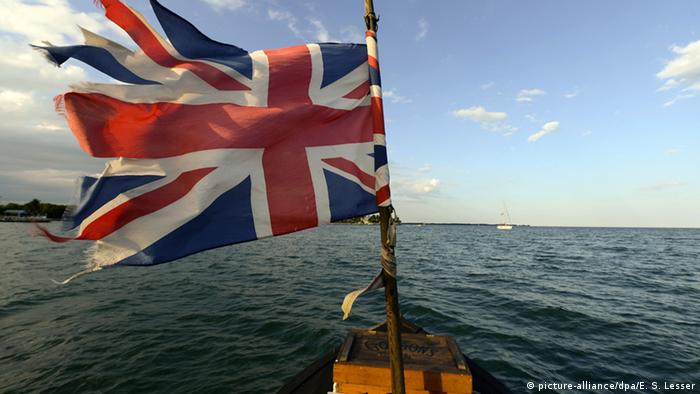 The United Kingdom isn't united at all at the moment: It's extremely divided. In Thursday's historic referendum, roughly 52 percent of voters chose "Leave" and 48 percent went "Remain." In Scotland and Northern Ireland, the majority of voters wanted to stay in the European Union, while the majority in England and Wales voted in favor of leaving.
"This is not yet a crisis," Jo Murkens, a law professor at the London School of Economics, told DW. "But we are in the early stages of what could not just be a constitutional crisis, but the constitutional endgame of the United Kingdom."
There are some "Leave" voters who are quite worried about what could happen next - and those in favor of remaining in the EU are devastated anyway, fearing the potential consequences of a Brexit.
The United Kingdom has not yet invoked Article 50 of the Lisbon Treaty, which establishes the procedures for a member state to leave the EU. The prime minister would have to inform the European Council of the country's intent to withdraw. But David Cameron, who announced his resignation after the results of the referendum became clear on Friday, said that step would be up to the next prime minister.
As long as Article 50 hasn't been invoked, there are technically still ways to stop Brexit from happening. Here are four of them.
1. Parliament votes against Brexit
This seems to be the most clear-cut option. The members of the British Parliament will most likely have to vote on whether the United Kingdom actually leaves the EU. Since the referendum was purely advisory and nonbinding, the representatives can vote however they like - and potentially decide that their country should remain in the European Union after all.
"Members of parliament are representatives of the people, not delegates," Murkens said. "Their role is not to give effect to the will of the people. Their role is to make decisions on the basis of political judgment, party affiliation and their conscience."
It is unlikely, however, that members of parliament would overturn the referendum decision as "ignoring the will of the people is not going to help" them get re-elected, James Knightley, a senior economist with the global bank ING, told DW.
Still, the Labour MP David Lammy, for one example, has encouraged his fellow MPs to vote "Remain."
2. Hold another referendum
The results of the vote were pretty close. And now those who lost are calling for a second go-around. Even some of those who voted in favor of a Brexit might wonder what they got themselves into post-vote: Searches like "What does it mean to leave the EU?" and, more basic, "What is the EU?" surged on Google after the referendum. "Remain" supporters hope, of course, that Brexiteers in the first vote would decide differently after seeing how bad the pound has tumbled, for one example. 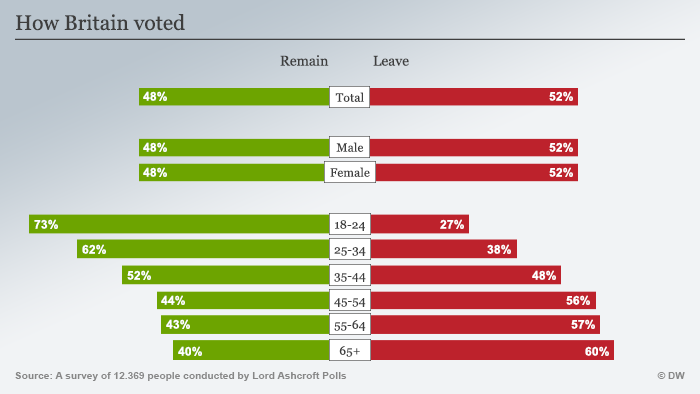 Many younger Brits wanted to 'Remain,' but their parents and grandparents voted 'Leave'

A petition on the British Parliament's website to call Britons back to the ballot box already has more than 3.6 million signatures. According to the site, "Parliament considers all petitions that get more than 100,000 signatures for a debate."
But this option, too, is unlikely. Prime Minister Cameron had ruled out a do over before the referendum and it would give the bitter impression that politicians could have the people vote over and over until they get the result that they want.
3. The EU makes enough concessions to keep the UK part of the union
Article 50 hasn't been invoked, so, technically, EU officials still have room to sweeten the deal enough for UK politicians to present remaining as an acceptable option. The chances of this happening, however, are miniscule.
The referendum "has largely been seen as a protest against migration," Knightley said. "So what we would need to see is significant concessions on the migration side coming from Europe, which seems highly unlikely because the free movement of labor and people are essential tenets of EU policy. It's one of the key founding rules."
4. Scotland vetoes a parliamentary Brexit decision 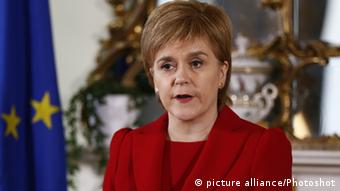 First Minister Nicola Sturgeon said she would ask the members of the Scottish Parliament not to give their "legislative consent" to a decision by Westminster to withdraw from the European Union. Some commentators have interpreted the Scotland Act of 1998 as requiring that Holyrood sign off on measures relating to the EU.

Professor Murkens, however, is one of many observers who do not believe that consent from Edinburgh is officially needed. Still, he said, London MPs should not disregard the opinions of Scottish and Northern Irish voters.
"I think [the referendum result] needs to be read as a 2-2 draw," Murkens said. "Scotland and Northern Ireland voted to remain, and England and Wales voted to leave."
Murkens worries that hundreds of years of peace processes among the four nations that make up the United Kingdom could be undone if the will of voters in Scotland and North Ireland is ignored by parliamentarians in Westminster - and that the two countries could then attempt to break away in an attempt to remain in or rejoin the European Union.
"The disintegration of the United Kingdom is a very high price to pay for withdrawing from the EU - especially when the 'Leave' campaign was premised on the slogan 'We want our country back,'" Murkens said. "There won't be a country left anymore to claim back."

'Only the UK can trigger Article 50,' George Osborne says