How sustainable is wind power? | Environment | All topics from climate change to conservation | DW | 27.12.2021

How sustainable is wind power?

Wind power is essential to fighting climate change, yet building the turbines is energy-intensive and the blades are made from plastics. So how eco-friendly is wind power really? 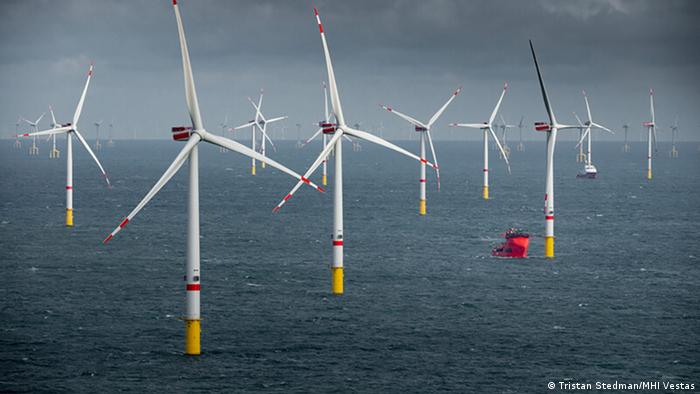 Together with solar power, wind power is set to become the key pillar of the global renewable energy supply.

Generating power from wind is not only carbon neutral, it can also be used to produce hydrogen and synthetic fuels like kerosene and diesel in a climate-friendly way.

With the sun, wind is so abundant that it has the potential to supply the entire global energy demand a few times over. This will be vital for the energy transition.

But what about the negatives? How much of a wind turbine can be recycled? And what about the impact on species, and especially bird life? What is the lifetime carbon footprint of wind power?

Wind's footprint: It's all relative

Building wind turbines is a very energy-intensive process, especially the production of the steel towers and the concrete foundations.

According to the German Environment Agency (Umweltbundesamt, UBA), wind power plants take between 2 1/2 to 11 months to generate the amount of energy that was needed for their construction.

On average, wind turbines are operated for about 25 years. During this time, they generate 40 times more energy compared to the energy required for the production, operation and the disposal of a wind power plant.

So-called upstream emissions, generated mostly through the production of carbon-intensive steel and cement, are included in the overall carbon balance of a wind turbine's life cycle.

An onshore wind turbine that is newly built today produces around 9 grams of CO2 for every kilowatt hour (kWh) it generates, according to according to the UBA. A new offshore plant in the sea emits 7 grams of CO2 per kWh.

According to a study commissioned by the global anti-nuclear movement WISE, nuclear energy accounts for about 117 grams of CO2 per kWh, considering the emissions caused by uranium mining and the construction and operation of nuclear reactors.

What can be recycled?

When maintained well, these small-scale plants can operate for more than 30 years and can now be found in many countries.

Due to their long lifetime, only a few old plants have so far been decommissioned. But by 2050, up to 50,000 wind farms will need to be shut down and replaced by newer and much more efficient wind power technology.

This will require the disposal of much of the concrete found in the foundation, steel in the tower and the gear box and a compound of plastic with glass or carbon fiber used in the rotor blades.

The concrete can be crushed and used in roadworks, and the precious steel can be recycled into new steel. Other valuable metals such as copper and aluminum can be reused.

But recycling the rotor blades made from plastic composites is more difficult. In the United States, old rotor blades have so far ended up in disposal sites. In Europe, they have mostly been used as alternative fuel in cement kilns and waste incinerators.

Yet some environmentalists have demanded that wind power plants not be installed in natural reserves or in migratory bird stopover sites so as not to endanger animals.

To mitigate this impact, an increasing number of large-scale wind power plants are also being equipped with cameras and software technology that aim to avoid collisions with birds by switching off the turbines before they come too close.

Whales, seals and fish have also been disturbed by noisy construction works on the seabed when the foundations for offshore wind plants are built.

From a technical point of view, this problem has largely been solved via a ring of tiny air bubbles used during constructions activities that dampens noise by around 90%.

Offshore wind plants can even have a positive effect on sea animals since the respective area can no longer be used for trawl fishery, allowing fish stocks to recover. Moreover, the plants' foundations become colonized by sea creatures such as mussels.

Less wind due to global warming?

While warm summers are often windless, many places are stormy in the colder months and during winter.

Yet, this does not mean that wind power is threatened by climate change. Researchers believe that rising temperatures are not going to significantly lower global wind power.

While the jet stream located eight to 12 kilometers (up to 7 miles) above sea level is slowed down by global warming, this does not affect the year-round energy yield of wind power plants.

Ultimately, wind capacity will be little affected by rising temperatures: while summers will be less breezy, future winters are predicted to be windier.

Some 1.3 million people worldwide already work in the wind sector, but five times as many will be needed as the shift to renewable energy gathers pace. Job prospects are increasing as the sector picks up worldwide.