Pakistan has announced it will ground 262 airline pilots whose credentials may have been falsified. A probe into their qualifications claimed that the pilots cheated on their exams or had others sit in their place. 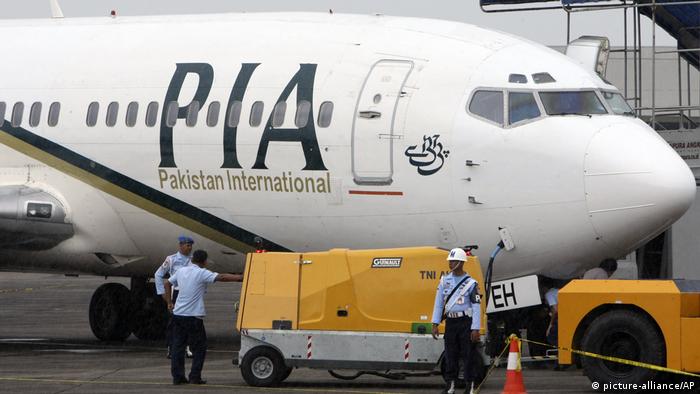 Pakistan International Airlines (PIA) is once again in hot water after nearly a third of its pilots were suspected of holding fake or "dubious" licenses and dodging exams following inquiries into their qualifications.

The 262 grounded pilots pending conclusion of inquiries against them included 141 from PIA, nine from Air Blue, 10 from Serene Airline, and 17 from Shaheen Airlines, Pakistani Aviation Minister Ghulam Sarwar Khan announced on Friday. They included 109 commercial and 153 airline transport pilots.

The purge has sparked global concern, raising questions over how the Pakistani pilots acquired licenses from Pakistan's Civil Aviation Authority (CAA) and worked for international airlines across the world.

The license scandal emerged in the wake of last month's plane crash in the southern port city of Karachi that killed 97 people on board. The crash prompted a preliminary report, which found that the pilots had failed to follow standard procedures and disregarded alarms.

Khan said authorities had been investigating collusion between pilots and civil aviation officials since late 2018 to circumvent examinations. He said all the pilots were accused of having someone sit one or more exam papers for them, and sometimes even all the eight papers required for an airline pilot's licence.

Details of the government's review of the pilots' qualifications were made public on Thursday, indicating 262 of Pakistan's 860 pilots have fake flying licenses. The PIA then stated it would ground all pilots with the "dubious" licences.

"We will restructure the airline, and a clean-up process will be completed by this year," the aviation minister said.

Pakistan's investigations into pilots' qualifications began after a 2018 crash landing and found that the test date on the licence of the pilot involved had been a holiday - suggesting it was fake as testing could not have taken place on that day. As a result, 16 PIA pilots were grounded in early 2019.

Aviation experts are divided over the license scandal. Khan said the grounding of the pilots was aimed at making the Pakistani airline industry credible and that it would also dispel global concerns surrounding PIA.

"The institution has reached the point of moral bankruptcy, not financial. Pakistan now has a choice to make whether to keep or alter its reputation for crashes. I think reforms are a good idea and that the institution needs to be fixed through proposed reforms," Shahzad Chaudhary, a retired vice air force marshal, told DW.

"Losing people's lives is far worse than losing a temporary image before institutional reforms. There is a lack of induction, lack of trainings and lack of oversight in the PIA," Chaudhary added.

However, others see the purge as a global humiliation for Pakistan's aviation industry and doubt the promised reforms.

"This is the sweeping statement from the government and the list [of grounded pilots] issued by the government is doubtful. It has many mistakes and it will lead to disaster. People will not even think of boarding the PIA with fake license pilots flying the planes," said Ijaz Haroon, who was managing director of the airline until 2011.

"It is now an uphill task to revive the PIA. When the confidence level in the flying crew is lost, everything is lost. This move is going to be the last nail in the coffin," he added.

Khan said the list of pilots to be grounded had been sent to airlines and would also be available on the civil aviation website. He said all the airlines and clubs had been told that "these pilots shouldn't be allowed to fly anymore."

The Pakistan Air Line Pilots Association has challenged the authenticity of the list and asked the judiciary to probe the issue, citing distrust in a transparent government investigation.

"I have my doubts about the list and the way the government is dealing with it," said Haroon, calling for an independent judicial commission to investigate the matter.

A senior pilot who has been grounded over allegations of a fake license and declined to be named told DW: "The civil aviation authority has the right to issue the license after exams, but the list prepared by the government is full of blunders and was prepared in haste without knowing the consequences."

Having 19 years of flying experience, the pilot said he was shocked to see his name on the list. "I don't know what the government is going to do and I doubt their intention. Either they are going to privatize the national carrier or completely shut it down to acquire big hotels abroad," he told DW.

Pakistani former Prime Minister Shahid Khaqan Abbasi, also an aviation expert, told DW: "The premature sharing of the list is not a good step from the government. This is a serious matter and it should be investigated as 40% of our total pilots are dubious now. The government first issued the list without any investigation and only announced an investigation later."

Vietnam's aviation authority announced on Monday it had grounded all Pakistani pilots working for Vietnamese airlines, adding that the Civil Aviation Authority of Vietnam (CAAV) is coordinating with Pakistani authorities to review the pilots' profiles.

Air transport bodies have expressed concerns over such a large number of pilots having dubious credentials and said they are seeking more information on the matter.

"We are following reports from Pakistan regarding fake pilot licenses, which are concerning and represent a serious lapse in the licensing and safety oversight by the aviation regulator," said a spokesman for the International Air Transport Association (IATA).

The European Union Aviation Safety Agency (EASA) stated, "We are investigating the matter but cannot comment further at this stage."

Successive governments in the past have tried to privatize and overhaul the loss-making carrier but failed due to political pressure. PIA, which has a fleet of 31 aircraft and 434 pilots, plunged into further financial woes as a result of frequent cancellations and mismanagement.

The small Cessna aircraft crashed in a remote mountainous region of central Croatia. A search team discovered the wreckage using a drone.