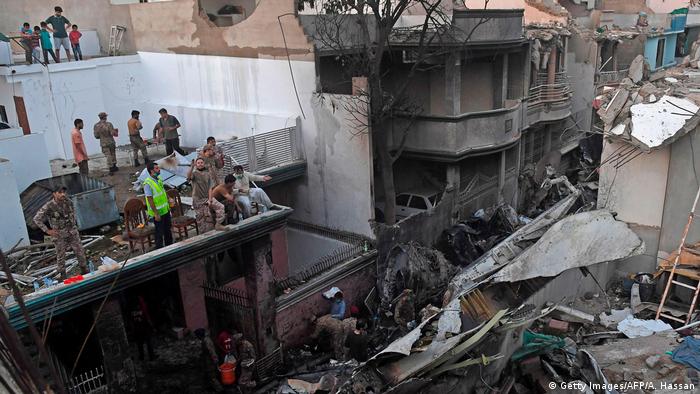 Twenty-four-year-old Mohammad Zubair on Saturday recounted how he heard "children crying" as he tried to climb through the debris of the crashed Pakistan International Airlines (PIA) jetliner.

Zubair is one of only two victims to have survived Friday's fatal crash with the only other survivor being Zafar Masood, a bank executive of the Bank of Punjab.

When PK8303, an Airbus A320 from Lahore to Karachi, began to shake violently, Zubair said he thought it was just turbulence. The pilot then announced on the intercom that the landing could be "troublesome."

"Suddenly the plane jerked violently, once and then again," he said. Moments later, as it approached the international airport, the plane crashed into an overcrowded residential neighborhood of Karachi known as Model Colony.

"I saw so much smoke and fire. I heard people crying, children crying," Zubair said. The survivor managed to crawl his way out of the rubble and smoke and was eventually rushed to a hospital. He had suffered burns but was in a stable condition.

PIA said on Saturday that rescue workers had found the flight data recorder from the crash, which killed 97 of the 99 passengers and crew onboard. The airline said the black box would be handed to investigators.

A further three people on the ground were injured, according to local media reports.

Officials said they'd retrieved all bodies from the scene. But provincial Health Department spokeswoman Meeran Yousaf said only 19 of the bodies have been identified.

DNA testing was being carried out at the University of Karachi to help name the rest of the victims while recovery efforts at the scene continued through Saturday.

A PIA spokesperson said air traffic control lost contact with the aircraft just after 2:30 pm (0930 GMT) on Friday on the approach to Karachi's international airport.

A recording of the transmission of the pilot's final exchange with air traffic control posted on the website LiveATC.net indicated the pilot had failed to land and was circling to make another attempt.

Meanwhile, PIA Chief Executive Arshad Mahmood Malik told reporters later on Friday the plane was safe to fly. "Technically, operationally everything was in place," he said.

In a statement, Airbus said the plane had first entered service in 2004 and was acquired by PIA a decade later and had logged around 47,100 flight hours and 25,860 flights as of Friday.

PIA's chief engineer signed a separate certificate April 28 saying all maintenance had been conducted. It noted: "the aircraft is fully airworthy and meets all the safety" standards.

Malik said an independent inquiry would be carried out. Airbus said it would provide technical assistance to investigators in France and Pakistan, as well as the PIA and engine manufacturers.

The Pakistan Airlines' Pilots Association has demanded a thorough investigation into the crash and called for involving bodies including the International Civil Aviation Organisation and International Federation of Air Line Pilots' Associations in the probe, the Pakistani English daily Dawn reported.

Whole families aboard for Eid

Pakistan Prime Minister Imran Khan said he was "shocked and saddened" by the crash.

"Prayers & condolences go to families of the deceased," he tweeted.

The country had only earlier this week resumed domestic flights ahead of the Eid-al Fitr holidays, which marks the end of the holy month of Ramadan.

Many of the passengers aboard the flight were whole families returning home together for the Eid holiday.

The crash comes as a double blow to Pakistan, with many devastated families already organizing funerals for victims of COVID-19.

COVID-19 in Pakistan: Why the government and doctors are at odds

Doctors and health workers in Pakistan are angry over a shortage of personal protective equipment (PPE). PM Imran Khan's government is facing severe criticism for its handling of the COVID-19 crisis in the country. (16.04.2020)