A report has revealed that the pilots of the Pakistan airliner that crashed last month were distracted over conversations about the coronavirus, leading to a failed attempt at landing. The crash killed 97 people. 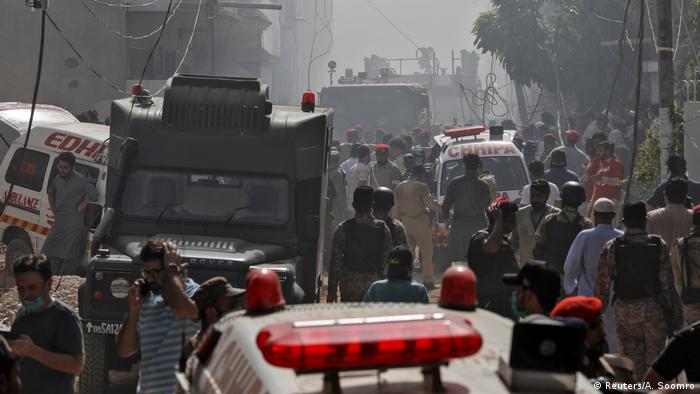 Pakistan's aviation minister has revealed that the pilots of a plane that crashed on May 22, killing 97 people, were engrossed in a conversation about the coronavirus and attempted to land without the aircraft's wheels down.

Last month, the crash involving an Airbus A320 of national carrier Pakistan International Airlines near Karachi's Jinnah International Airport resulted in the death of all but two people on board.

During the first attempt at landing, the engines of the plane touched the ground as the landing gear was not down. The aircraft took off again for a second try but the pilots were not informed that the engines had scraped the runway, aviation minister Ghulam Sarwar Khan told the parliament on Wednesday.

"The discussion throughout was about corona," said Khan, referring to audio retrieved from the cockpit voice recorder, which shed light on the conversation between the pilot and the co-pilot. "Corona was dominant over their mind. Their family was affected."

"Several warnings and alerts such as over-speed, landing gear not down and ground proximity alerts, were disregarded," it added. "The landing was undertaken with landing gear retracted. The aircraft touched the runway surface on its engines."

The air traffic control cleared the aircraft to land without noticing that the landing gears were not extended, the report found. In addition to this, the pilots were not informed about any potential damage to the engines from the first landing attempt.

"When the plane took off again, both engines had been damaged; and when the plane was making an approach for a second landing it didn't have that power and fell on the residential area," Khan added.

The minister added that the plane was "100 percent fit to fly" and the pilots, who were killed in the crash, were experienced and medically fit.

The aircraft crashed just days after Pakistan lifted its coronavirus restrictions, which had been in place since March. Domestic flights were allowed to resume ahead of the Muslim holiday of Eid al-Fitr but alternate seats on the plane had to be left vacant.

The plane was carrying 91 passengers and eight crew members. The plane sliced through residential buildings and a 13-year-old girl on the ground was fatally injured.

A full report could be released towards the end of the year.

Boeing grounded its Max series aircraft last year after deadly crashes were linked to faulty software. The company, however, remains optimistic that its fleet will receive the green light to go wheels up by summer. (19.02.2020)